I arrived in Bergen after an amazing few days in Tromso. Which you can also read about if you scroll down here.

Bergen is located in the Southwest of Norway, surrounded by fjords and mountains. It’s the second largest City in Norway behind Oslo, and averages 231 days of rain a year!

I was excited to visit for the hiking, cute wooden houses of Bryggen, and to see some of Norway’s famous fjords. 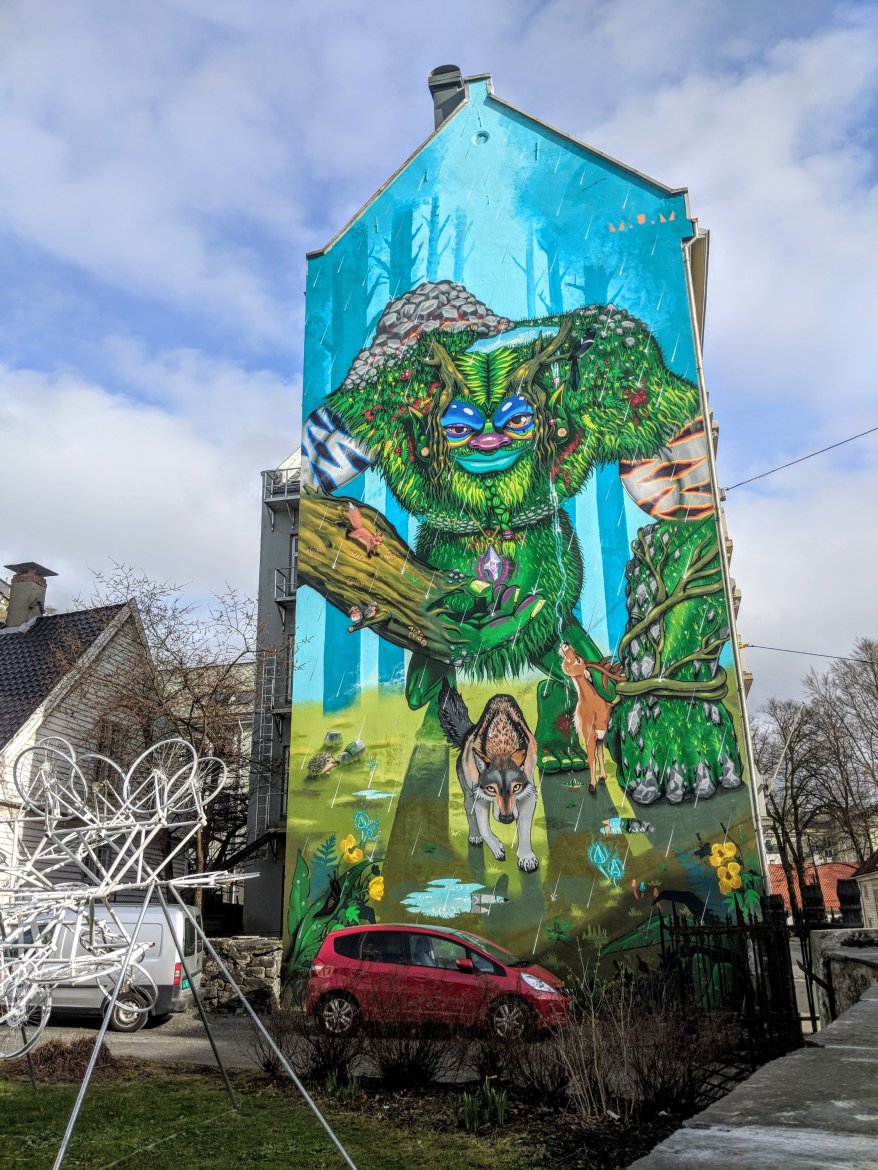 I took the flybussen into the City, it took 30 mins and cost about £10. I stayed at the Bergen Budget Hostel which was basic but the cheapest option!

I immediately set off to explore the City, passing some fun troll street art. Norway is famous for trolls, watch Troll Hunter to learn more. 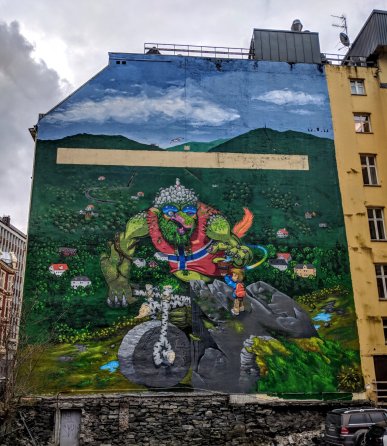 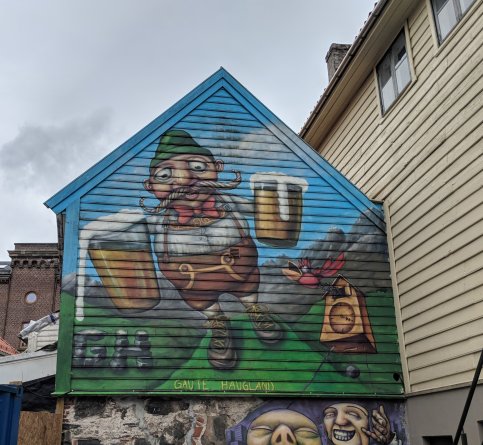 I was heading towards Bryggen, the old centre of Hanseatic leagues empire. It’s full of colourful wooden houses that line the waterfront.

Built in 1702 after a fire had destroyed most of the City, it’s now a UNESCO world heritage site. Make sure you explore the little alleyways between and behind the houses, where you can find shops and restaurants. 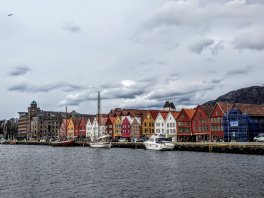 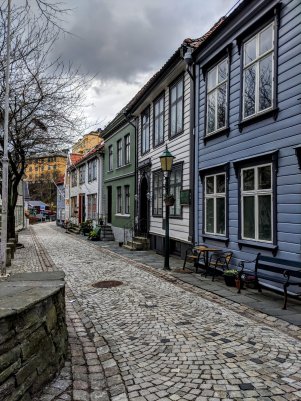 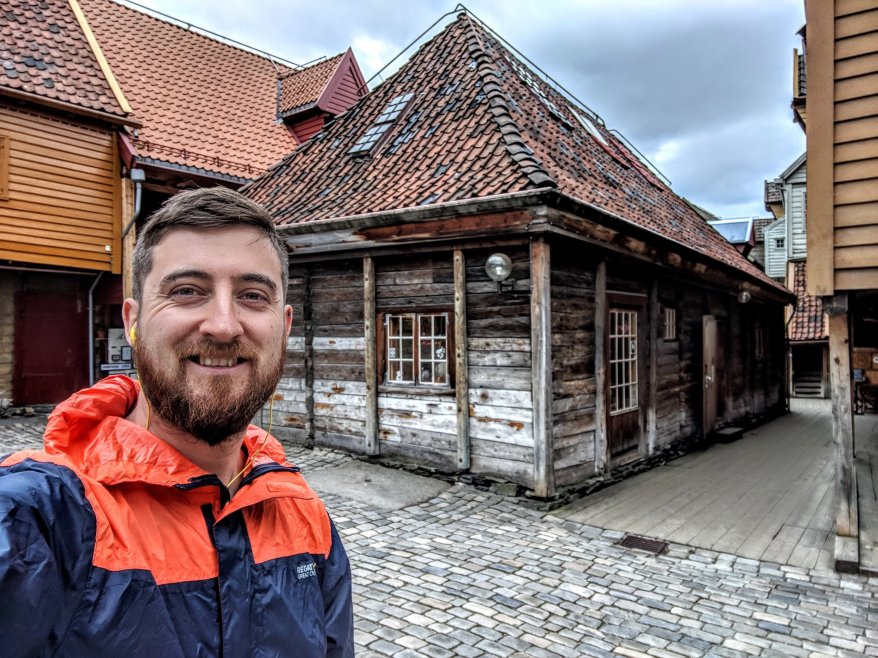 If you continue along the waterfront past Bryggen you come to Bergenhus Fortress, some of the buildings here were built in the 1240s and it’s one of the oldest stone castles left in Norway.

I turned back here and followed the waterfront round in the opposite direction, keep an eye out for some of the amazing street art pieces that are dotted about the City. For fish lovers there’s a fishmarket on Strandkaien, and the main shopping streets are just up from here. 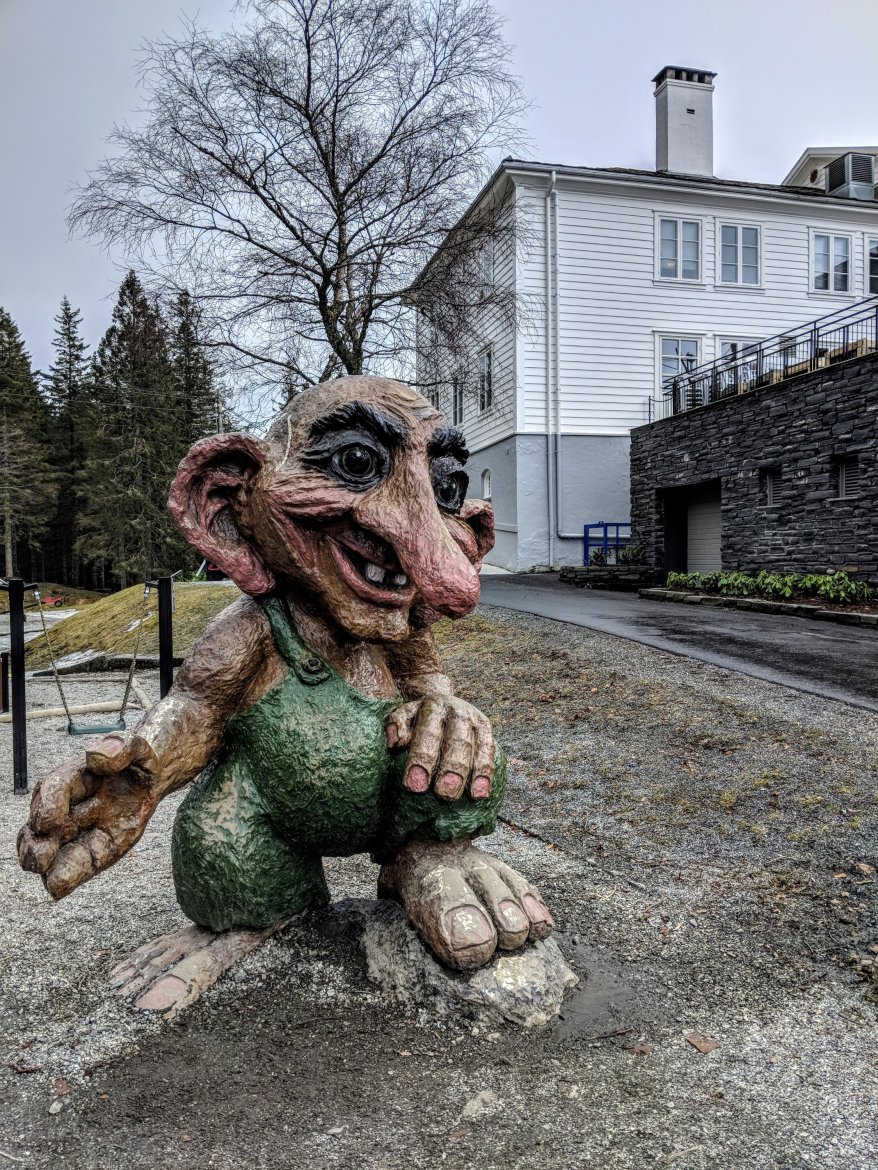 The streets around Sydneskleiven are really beautiful, and there are some great views from the end of Oysteins Gate and St John’s Church is right by here too. I took a little detour through the university area and walked around the lovely Lille Lungegardsvannet lake. 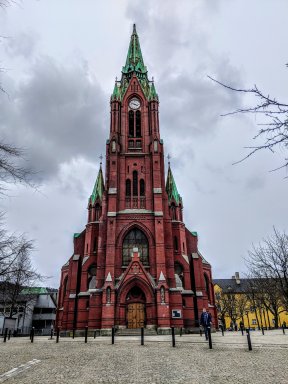 This only took the morning as I had arrived into Bergen early, so I decided to go hiking! You can take a cable car up to the top of Floyen mountain near Bryggen and once up there you can walk to your hearts content. The views up here of Bergen and out to sea were incredible.

I headed to Granbakken, a little mountain lake first, along lovely little wooden walkways through green forest. It doesn’t take long to get away from the crowds around the cable car spot.

The lake was frozen over which was cool, and there were some awesome places to stop, one where I dangled my legs above the forest below!

From here I decided to walk through the forest to Skredderdalen, and followed the river up to lake Nedrediket. This took me along ridges, with more views of Bergen, and following the raging river up towards the lake was amazing. 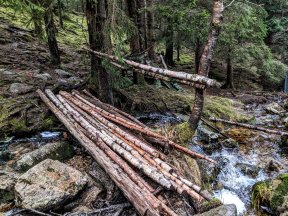 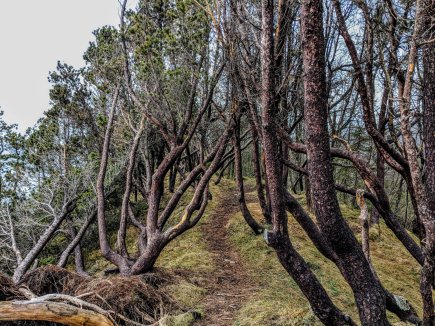 I was loving the walk and continued on to a bigger lake called Storevatnet, you couldn’t even see the other side of this one due to some fog. 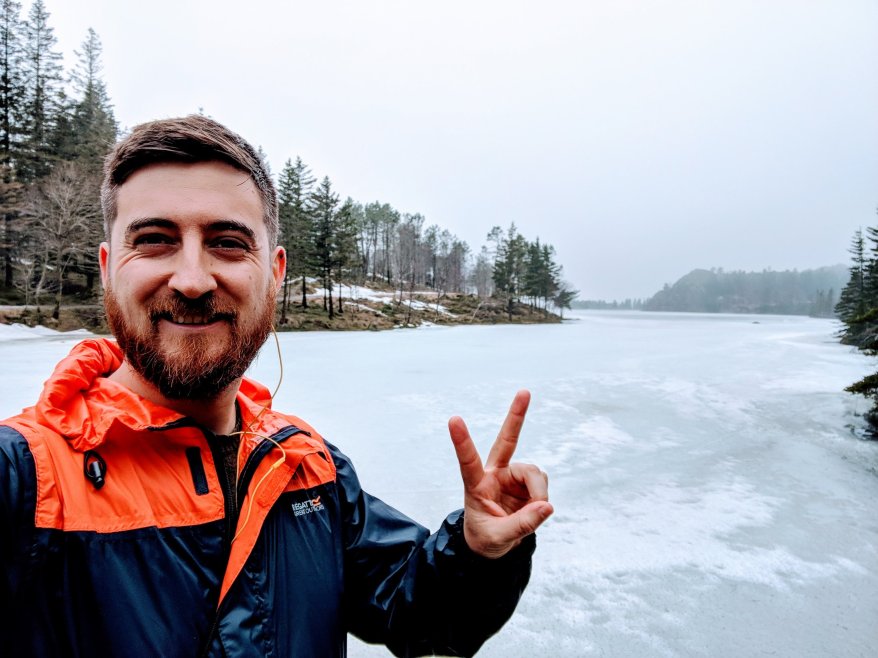 I noticed some steps going up alongside the lake and thought the views from the top would be amazing. Unfortunately when I got to the top this fog rolled in and I could barely see in front of me.

This led to a rather dicey hike across the tops of the mountain in thick fog, snow and ice. Honestly there was a point where I got a little bit worried, luckily google maps worked the entire time, so I could easily follow the path along to Rundemanen, a little heritage museum that had a proper road heading back down towards the cable car.

Apart from a section of road that was closed due to an avalanche the rest of the walk down was pretty nice, the fog had subsided. It took me around 5 hours in total to hike around the mountains, and I was definitely ready to eat something. 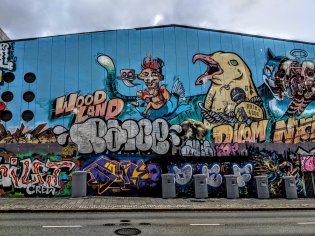 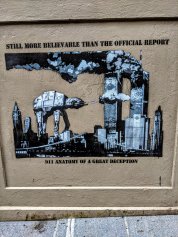 So I stopped off at a pizza place in the City, I was so tired that I went back to the hostel and pretty much passed out.

I wish I had gone around the City at night to see it from a different perspective, but there will always be next time!