Kiev is the capital of Ukraine, the 2nd largest country in Europe behind Russia. Located in Eastern Europe, it shares a border with Russia, Belarus, Romania and Poland. I wanted to visit Ukraine so I could enter the Chernobyl exclusion zone, and Kiev is the best place to do this from. I had also found cheap flights from Ryanair, unfortunately they cancelled these so I had to re-book with British Airways. There are some no go areas of Ukraine at the moment due to the annexation of Crimea by the Russians, so check the UK government website for up to date advice.

It was founded in the 5th century, has a world heritage site amongst it’s many Orthodox churches, the world’s deepest underground railway line and it is where Stalin, Churchill and Roosevelt met to discuss them organisation of post WWII Europe! Unfortunately and much to my dismay the chicken kiev wasn’t invented here! Communist symbols and street names were outlawed here in 2015 to attempt to move away from Russia and the Soviet Union.

I arrived late into Kiev and took the sky bus found in front of terminal D and B to the main station. This took almost an hour, I didn’t see much as it was already dark by the time I got there. There is now a train that runs twice an hour and only takes 40 minutes to the City. I stayed at irisHotel right by the station for a couple of nights, then changed to the Fire Inn for the last two nights. Both were cheap, comfy and clean, the Fire Inn was in an old fire station which was pretty cool.

I started my tour of Kiev by heading to the Ukrainian State Museum of the Great Patriotic War. I had just visited one in Belarus and it was so interesting seeing how the two nations portrayed the war so differently, especially how they perceived Russia/The Soviets.

It’s another really interesting museum even if you don’t have much interest in history or WWII. The most impressive part of the museum is outside where you can view the Motherland Monument. 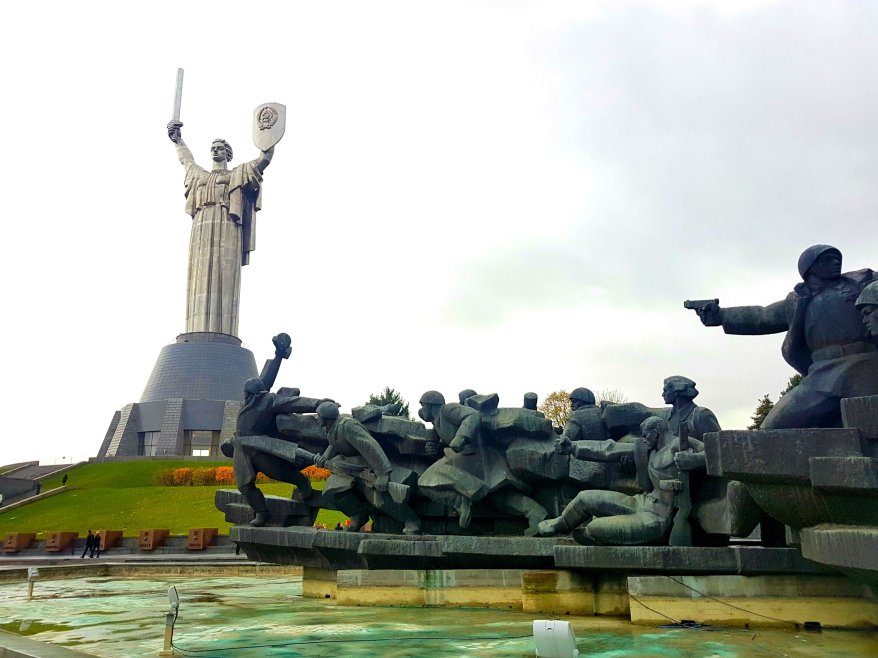 Standing at 62 metres tall it dominates the skyline above the museum. It was finished in 1981 and has been exempt from the decommunisation law because of it’s WWII significance. It looks like something out of a sci-fi film and it’s one of the grandest statues I’ve ever seen. 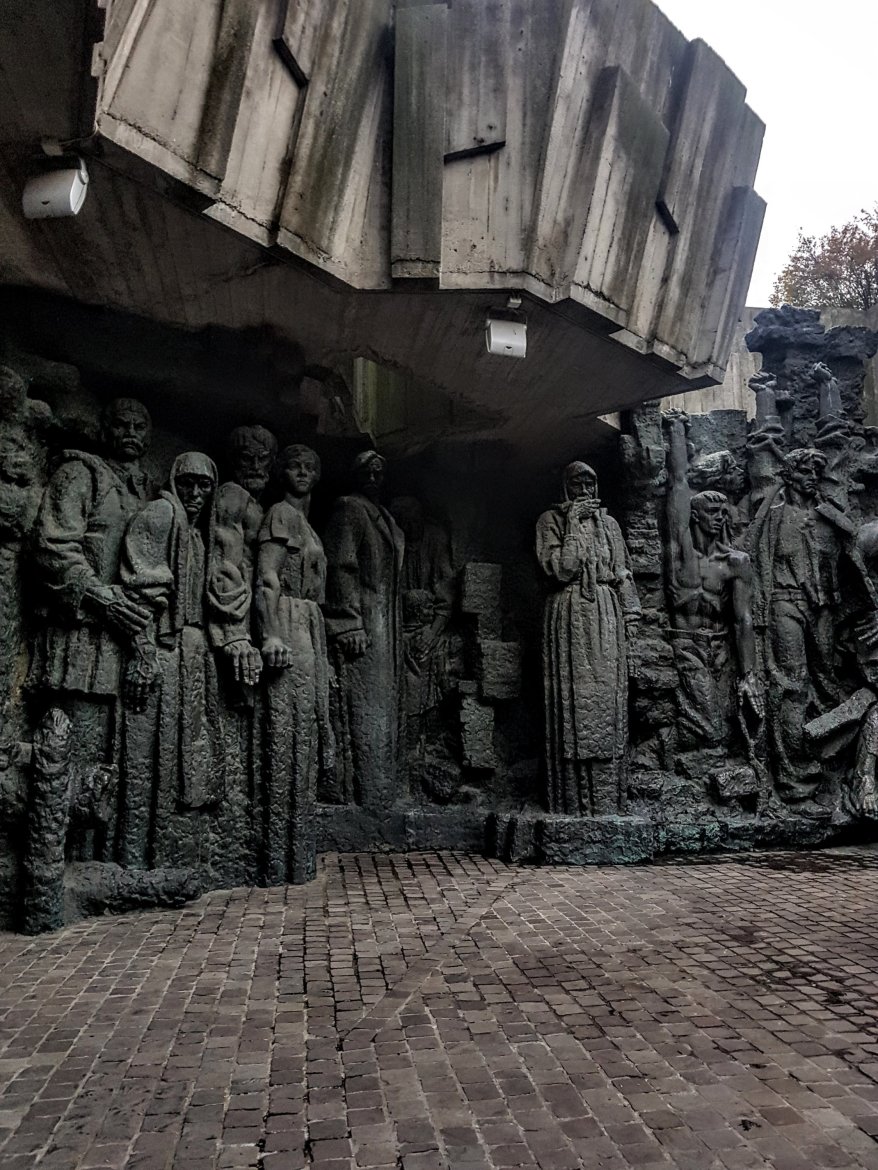 There’s also a monument to the UN, the founders of Kiev and a load of cool tanks and a nice park area around the museum. You can walk straight from here past a few cafes and shops to the next big sight, the Pechersk Lavra. 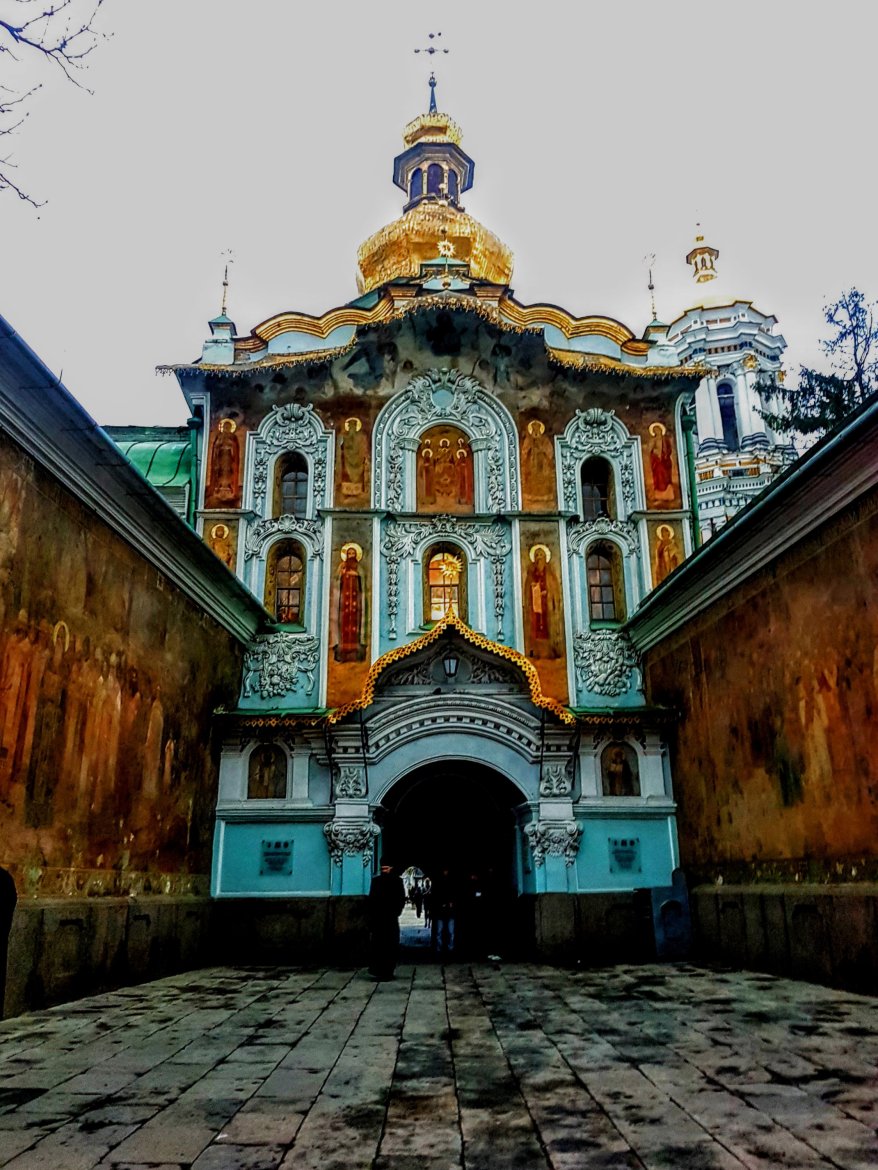 A monastery with a huge cave complex underneath it with several saints and religious figures reported to be buried there, it began in 1051 and the complex now consists of several pretty orthodox churches and you can visit the catacombs for a small fee. You aren’t allowed to take photos in the catacombs but are free to wander around the rest of it and take as many pics as you like. It’s definitely one of the best things to do here. 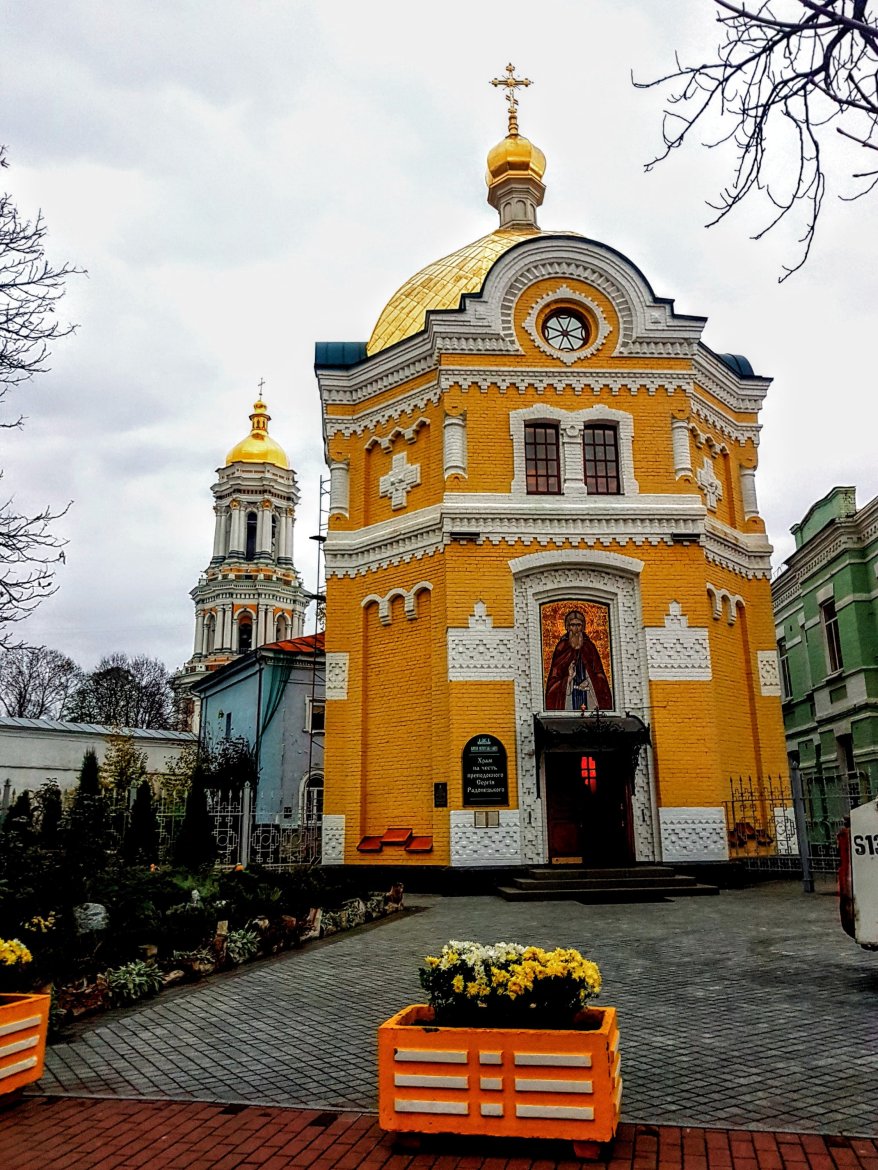 There are a couple of museums and art galleries nearby but I didn’t visit them, instead heading to the Holodomor Genocide museum, here you can learn more about the famine caused by Stalinist policies such as collectivisation in the early 1930s that killed an estimated 7.5 million Ukrainians. 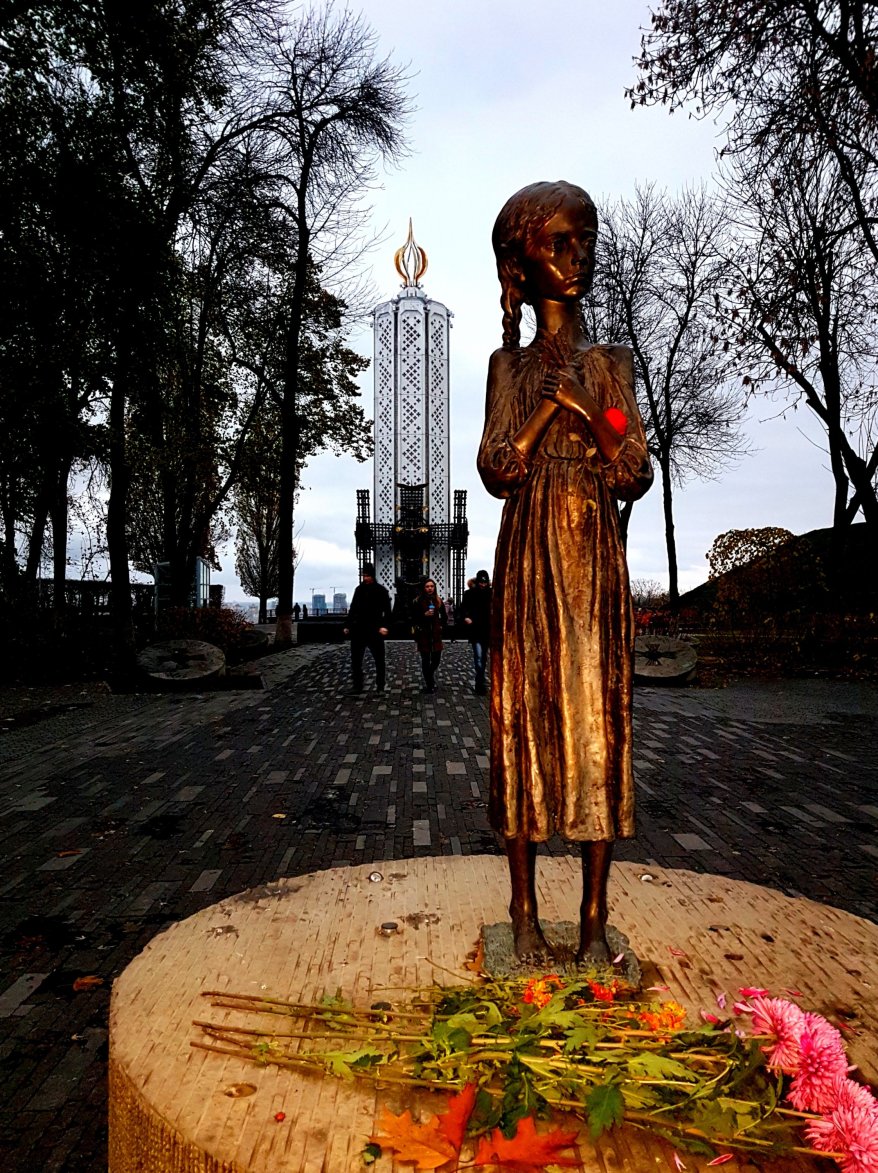 It’s a harrowing tale, especially the propaganda used such as spreading tales that the peasants were hoarding food for themselves instead of giving to the wider collective of the USSR. Just along from here is a memorial to the Unknown Soldier. 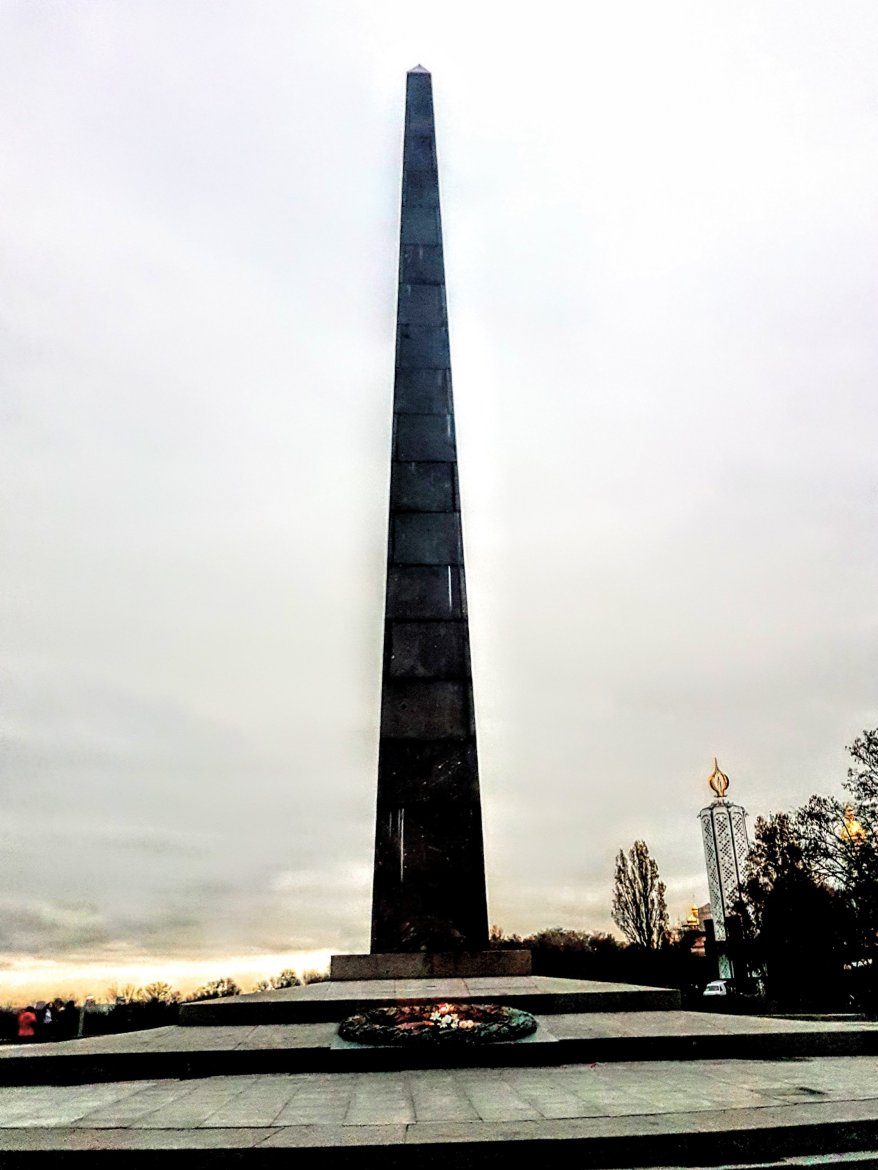 Next up was the Mariyinsky Palace, completed in 1752 it’s the official residence of the president of Ukraine in Kiev and is joined to the parliament of Ukraine. It was built in the baroque style and the first royal figure to stay here was Catherine the Great! It was badly damaged in WWII and has had a couple of major restorations since then.

It’s a beautiful building and the adjacent park is lovely to wander around too. You can check out the old Dynamo Kiev stadium before walking over the park bridge and enjoy amazing views over the river Dnipro and to the East of Kiev.

I followed the walkway past the Museum of Water and stopped for a picture with a big bronze frog, you throw a coin in it’s mouth for good luck.

It was starting to get a bit dark and walking through the parks was so nice as they were all lit up, and if you follow on from the frog you get to the Friendship of Nations Arch.

Another throwback to Soviet rule it was completed in 1982 to commemorate the 60th anniversary of the USSR and 1500th anniversary of Kiev. It’s a huge 50m diameter rainbow shaped arch made of titanium, with a bronze statue of russian and ukrainian workers underneath.

During eurovision it was lit up in rainbow colours and renamed the arch of diversity however after 3 weeks it went back to normal. It was supposed to be removed and replaced with a memorial to soldiers fighting russian rebels in the East of the country, but it still stands as far as I’m aware! 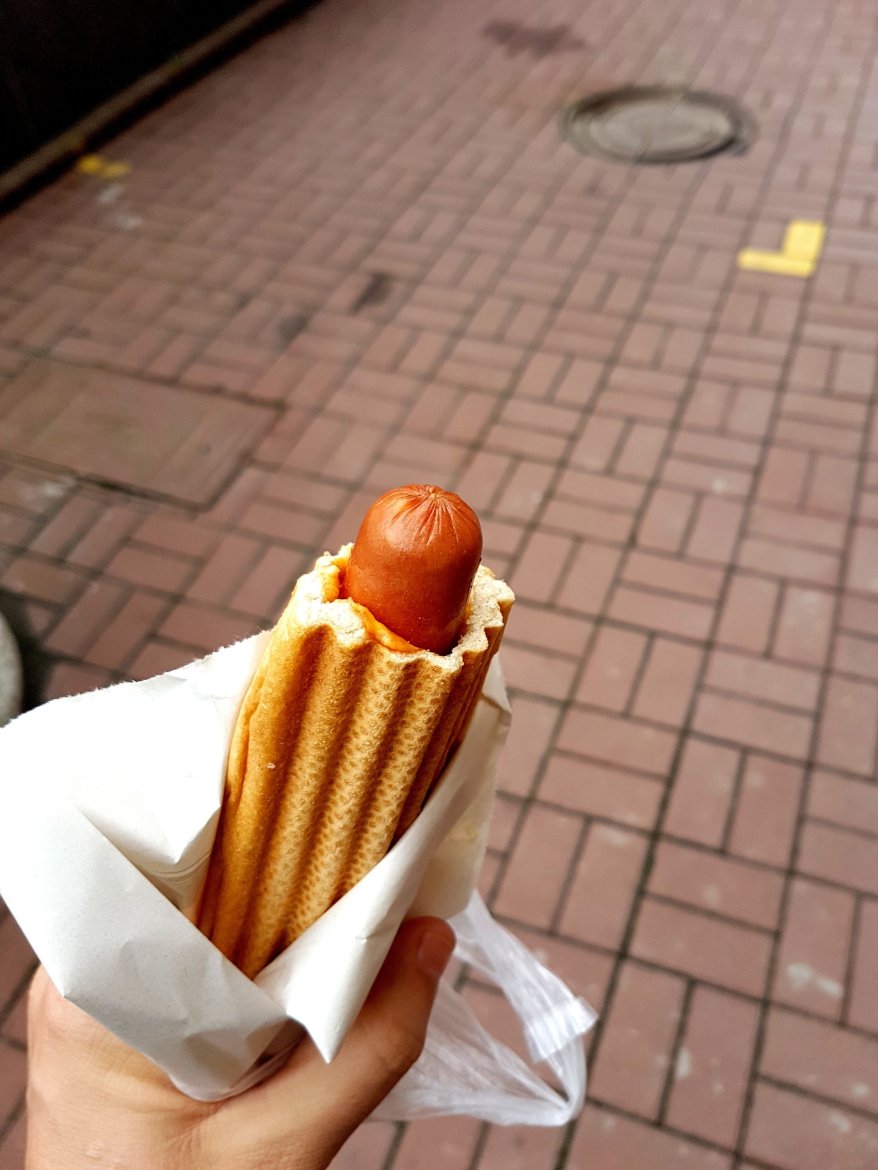 I was starving now as I had only had a cute little hotdog from a place in one of the subway stations, it was delicious but I needed something more substantial. After a quick google I headed to Veterano Pizzeria, I liked the name and I adore pizza!

The decor was so cool inside, with army memorabilia on the walls and table tops made from bullets. The food was really good too and I had a couple of beers to go alongside the pizza and cheesecake.

I spent the rest of the evening wandering down Khreschatyk St, a huge avenue runnning through central Kiev, it was stunning!

All the buildings were lit up and it was almost like Vienna in it’s grandiosity. So far Kiev was nothing like I was expecting, and I was super impressed. I stopped at Independance Square, where there was a huge mural of chains saying ‘freedom is our religion’, an I love Kiev sign and some cute statues.

I had walked so much today in the cold but I had enjoyed every moment. I would have missed a lot of things that I found by mistake if I had taken the underground or taxis/buses. I also thought it was amazing that half of Kiev seemed to be out, drinking coffee from little huts on the pavement all wrapped up. It was very European. On my way back to the hotel I passed this stunning building called Volodymyr’s Cathedral, I couldn’t wait to explore the rest of Kiev!