Brisbane is the 3rd largest City in Australia, the capital of Queensland and a great gateway to the Sunshine coast and Great Barrier Reef. It has 283 days of sunshine, making it the perfect place to wander around and relax with a beer

Many people fly in to Brisbane just to head back out, but I had an opportunity to fly up with my partner for a night, so I tried to cram in as much as possible in 24 hours!

We arrived at the Domestic airport, and took a taxi to the City using Didi for the first time.

It was the cheapest option at $25 and it took around 18 minutes. We checked in to our hotel, the Mercure at North Quay and dropped our stuff off.

It was 12:30 and we were ready for lunch, I had found a cute little place called Brew just off Albert St. They do great vegetarian options on their menu and a good selection of beers. We had the halloumi bagel and Mac cheese balls, both with fries and both were delicious!

We were nearby the City Hall which is the largest in Australia, I had read you could go up to the top of the clock tower and it was free! So off we went, taking the lift to the 3rd floor. Unfortunately there wasn’t a tour space until 15:30 but we took our tickets just in case. 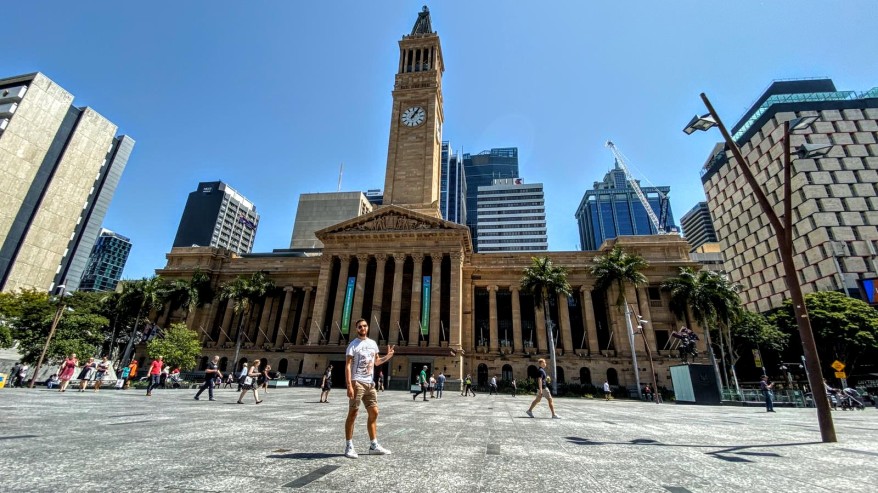 After this we walked straight down Albert Street past all the shops and through the botanical gardens where the first macadamia nuts were cultivated for farming! It was super cute and there were little lizards and interesting tropical plants. 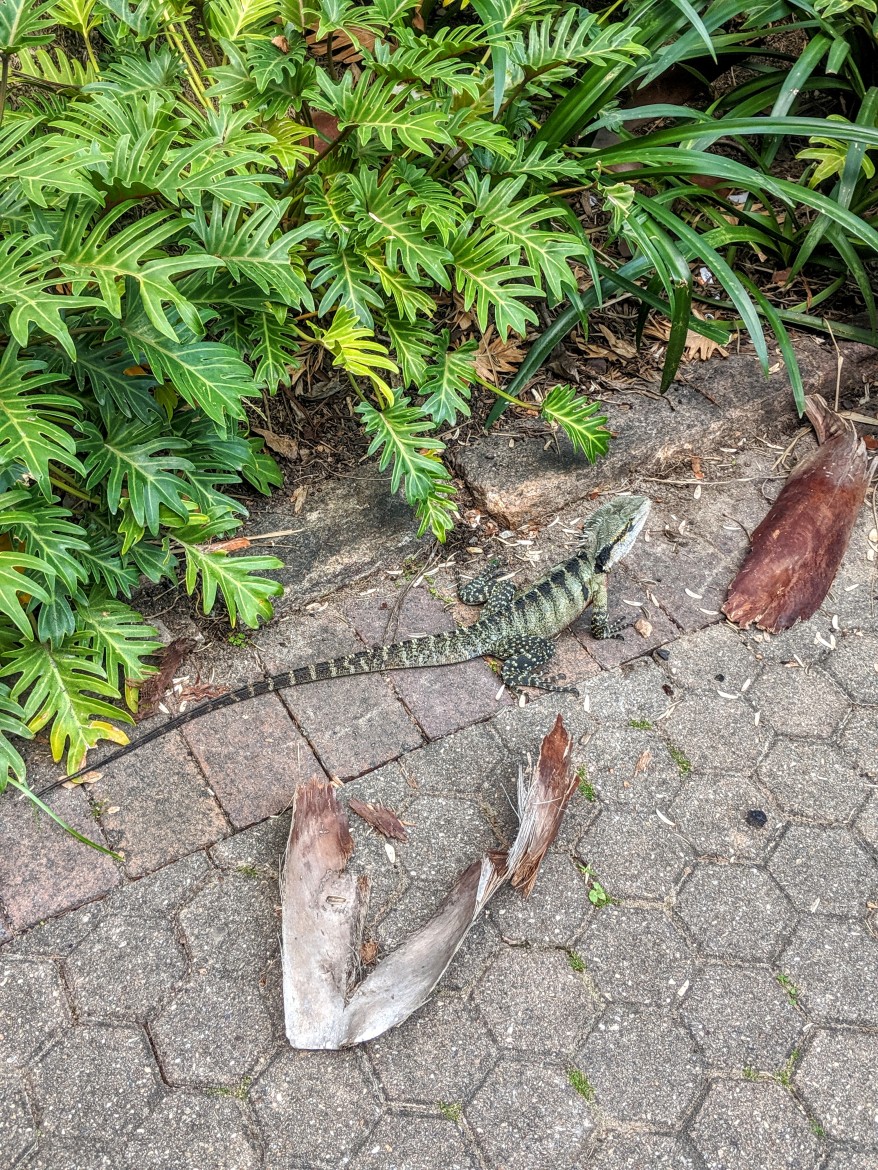 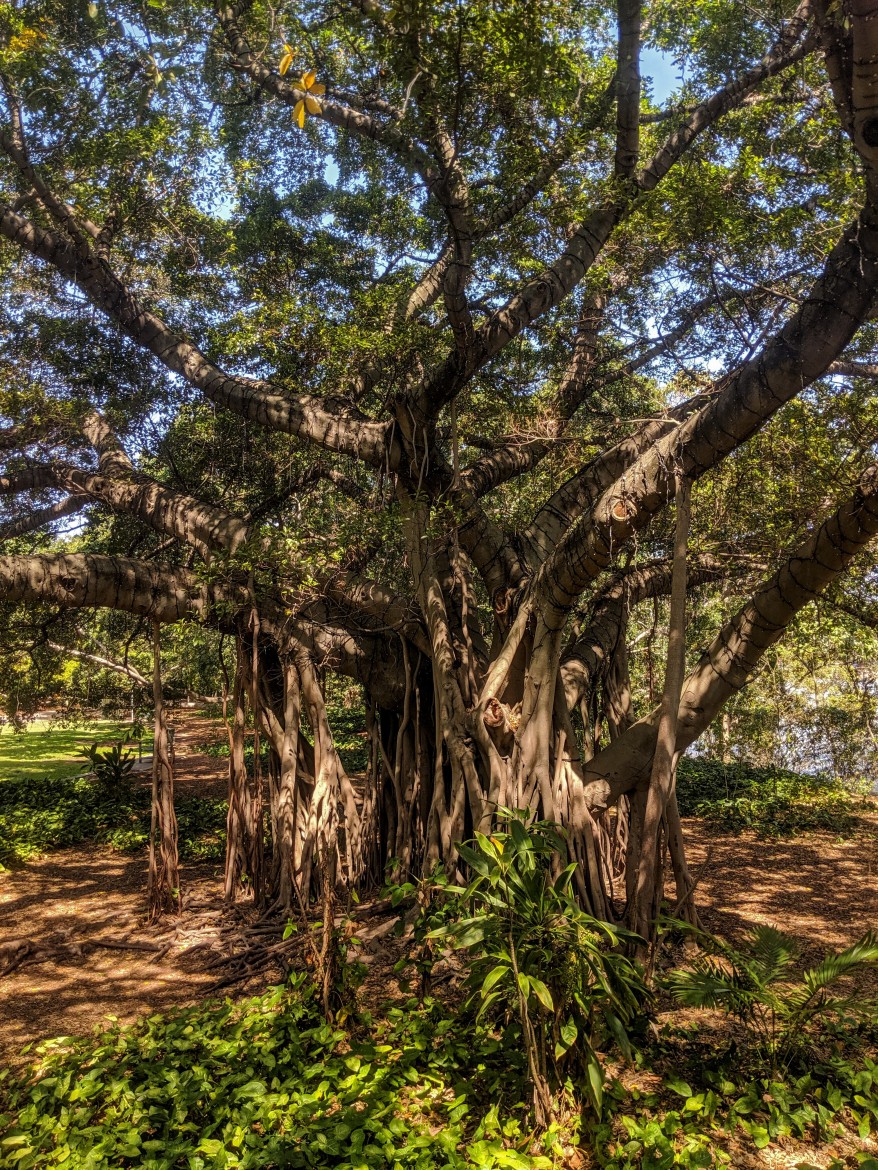 Crossing the Brisbane River on the Goodwill bridge we went past the Maritime museum and began walking North along Southbank. The weather was gorgeous and the walkway beneath bright purple Bougainvilleans was stunning.

It’s so great to have such amazing green spaces in the City, and even better is the Streets beach! A man made turquoise blue beach pool in the middle of the City. A great place to swim, relax and catch some rays.

A top thing to do in Brisbane is take the City Hopper a free boat taxi that runs up and down the river. Just make sure you take the free one as the other boats charge. 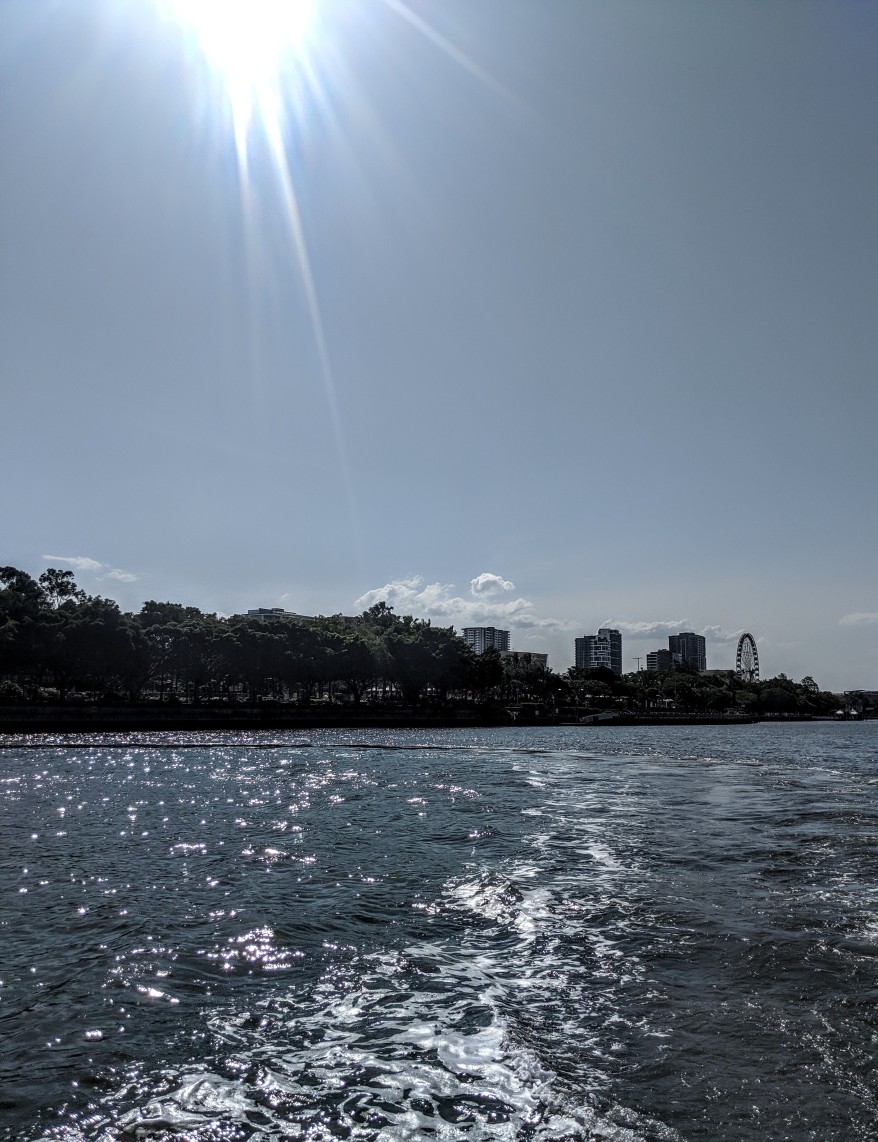 We took the boat past kangaroo point, where you can abseil down the cliffs, past the waterside restaurants of Eagle St pier and under the famous Storey bridge.

The final stop was Sydney St and we got off here to walk back up to the City over the raised walkway above the river.

It was so beautiful, with places to stop and sit and water fountains. I had read there were bill sharks in the river, and spent my time keeping an eagle eye out for them to no avail. 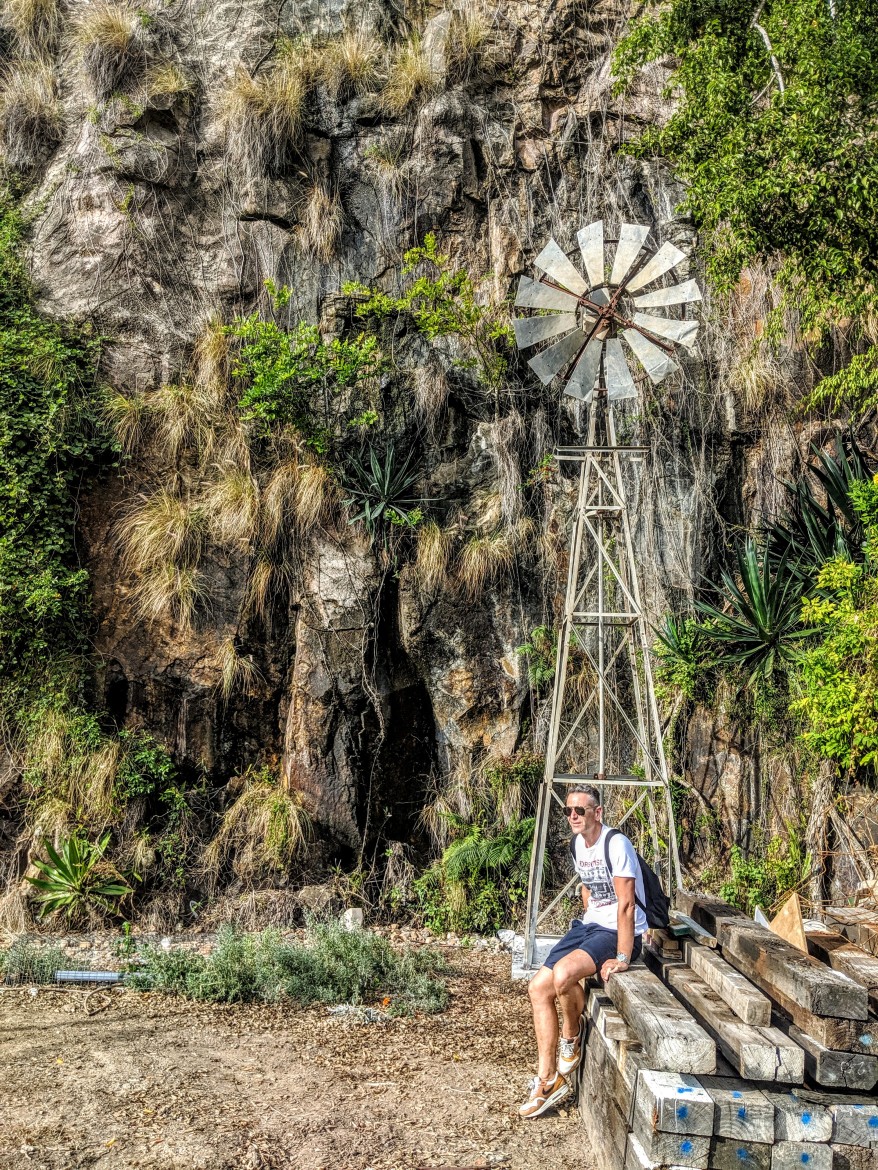 If you follow this walkway till the end, you can reward yourself with a beer at Felon’s brewing company. A wonderful spot directly underneath Storey bridge. Nearby is Wilson outlook reserve, which affords you spectacular views of the city.

Felon’s brews all it’s own beers on site, and the cool instagrammable Percival’s bar is right next door too. As we sat enjoying our beers a huge thunderstorm appeared out of nowhere. Lightning filled the sky above the skyscrapers and the rain suddenly poured down. 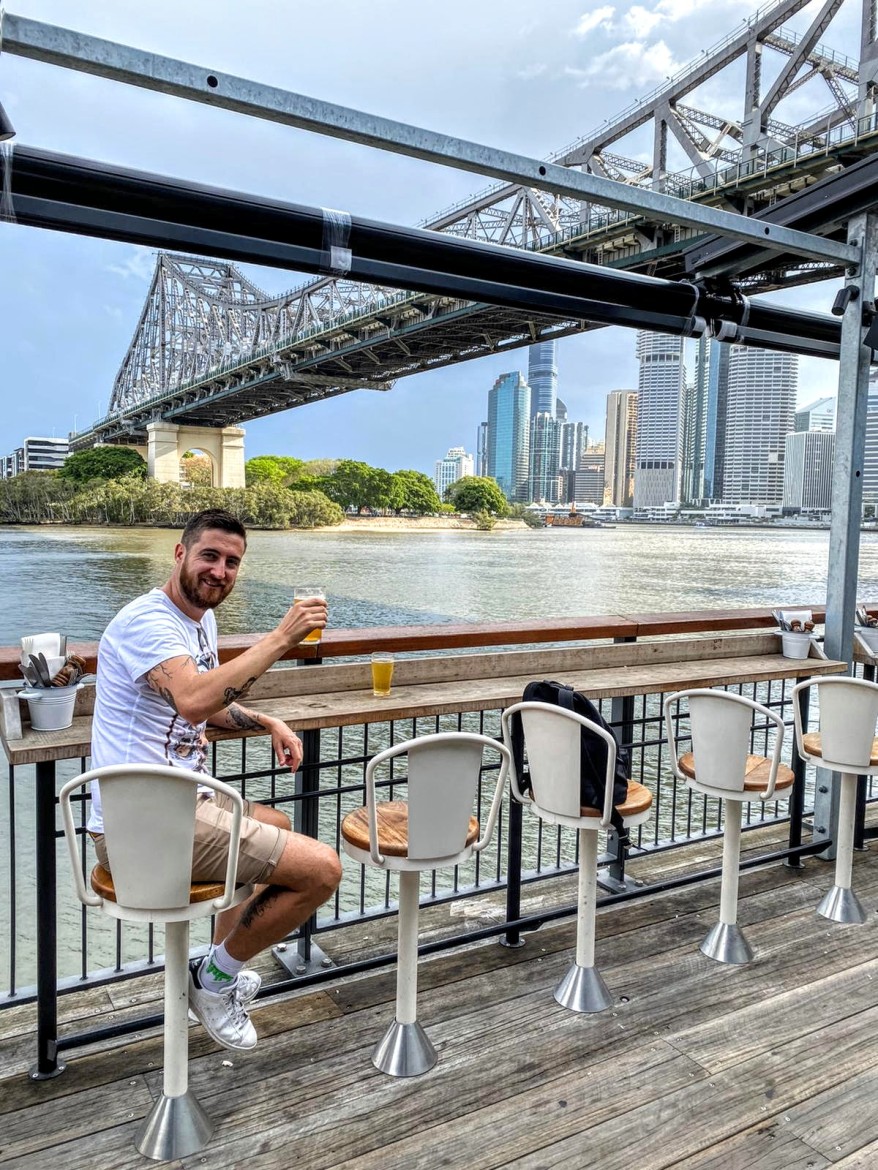 It was such a cool experience, helped by the fact that we were sheltered from the rain. Plus it was a great excuse to get another beer.

The sun soon appeared again, so we took the City reach boardwalk all the way back to Eagle Street pier, through Queen Street mall and back to the hotel. After a quick change and freshen up we had a drink in the hotel bar and went in search of food. The best place to go would be Fish lane in South Brisbane but we stayed local and tried Harajuku Gyoza.

This was really good, dumplings, agedashi tofu and deep fried eggplant. Tasty beers including a cool Japanese ale. All for $30 each with rice, edamame and miso. Filled to the brim we went back to the hotel as Craig was up early to work the next day.

Craig was off to work in the morning and I was off to solo explore. I walked down Fish lane with it’s amazing Street art and hipster cafes. I stopped at Naim on Melbourne street and had incredible smashed avo on toast. It’s a fabulous little brunch spot. 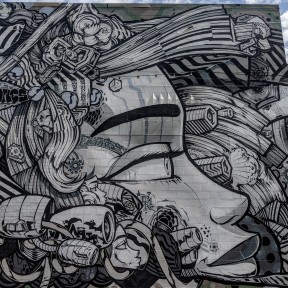 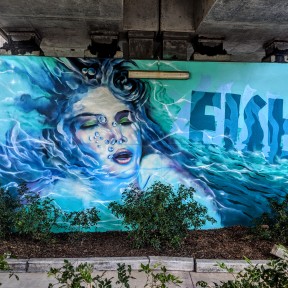 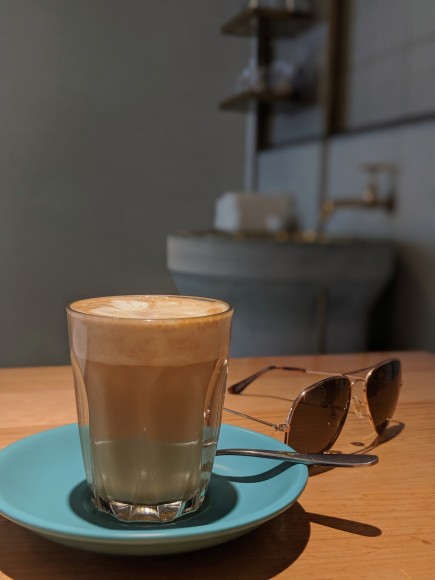 I was now ready to hit up GOMA, with perfect timing as it opens at 10am it’s free too which is a bonus. It’s the gallery of modern art and it had some very interesting exhibits on aboriginal art and life, and some really cool media displays. It’s got some cool architecture moments as well. 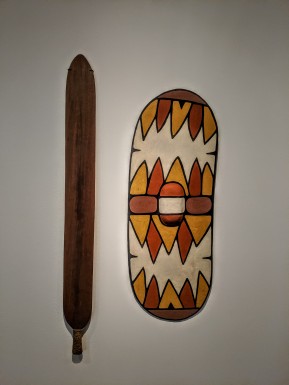 I spent around an hour here at a leisurely pace, and then quickly popped over to the state library of Queensland to see an exhibition on satirical comic strips from 2018.

After missing out on the clock tower from the previous day, I was determined to do it. So after another cute boardwalk I headed back over the river and picked up a ticket. This time it was an hour’s wait. I quickly checked Google maps and found an old windmill, which turned out to be the oldest convict-built structure in Brisbane! 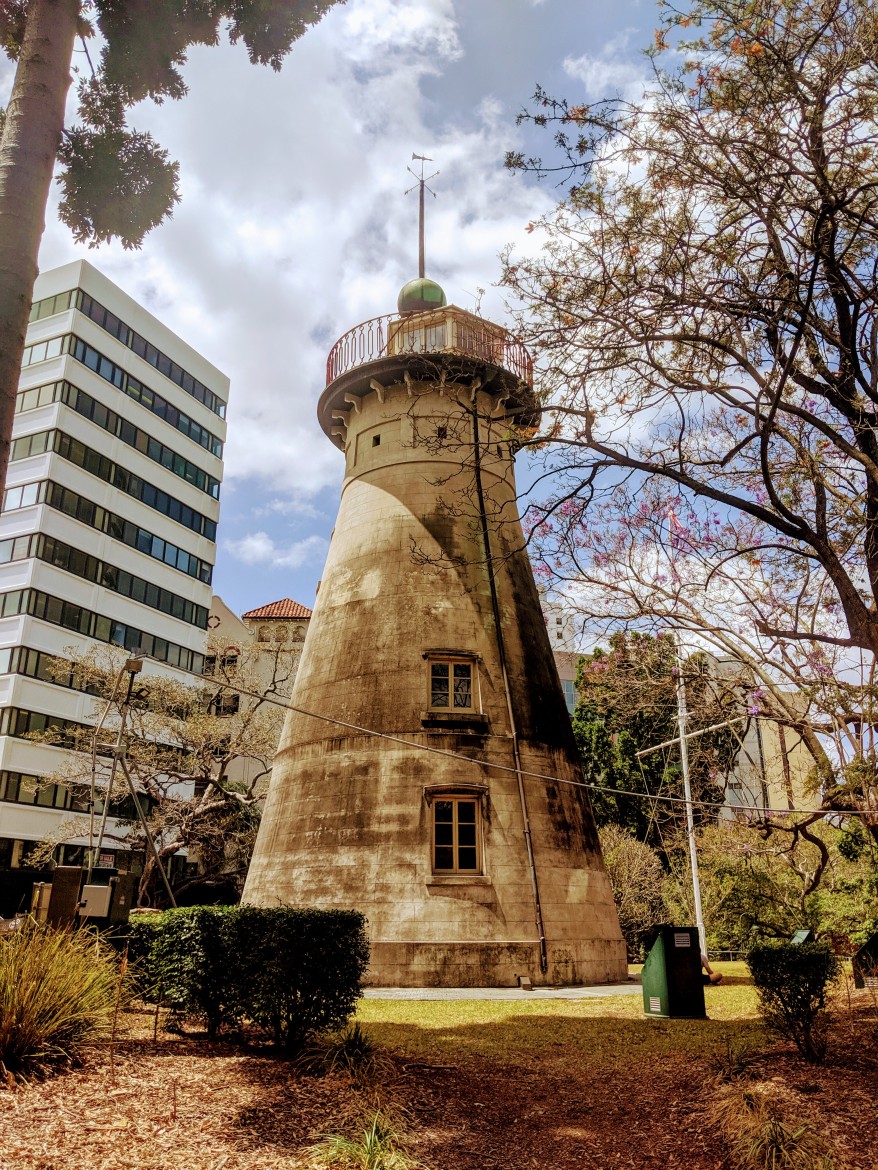 I also got to enjoy a couple of nice parks, a quaint little shopping arcade and finally took the plunge and tried the Hungry Jack’s vegan whopper. It was soooo good, and whoever invented the spider is a GOD. It’s soft serve on top of a slushy and it’s incredible. 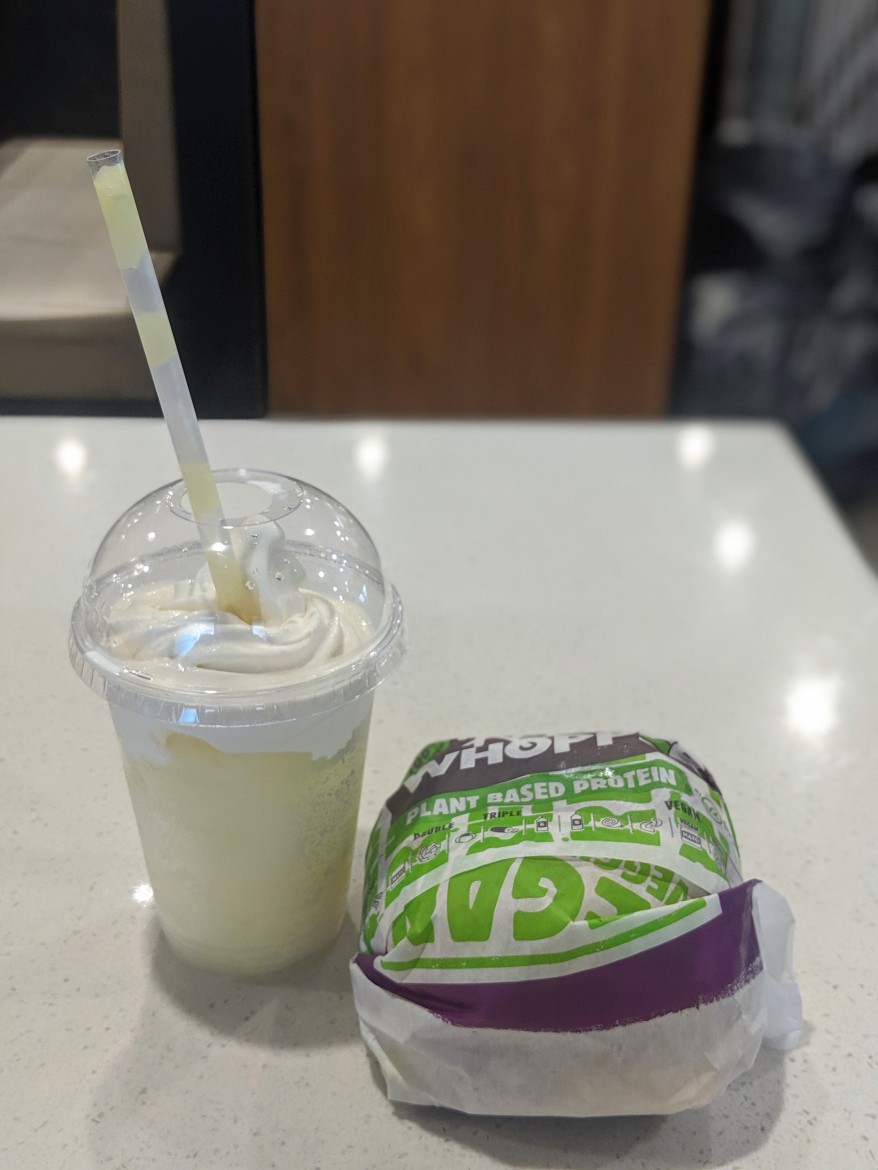 Ready to hit the clock tower, we went up in the original lift and had about 10 minutes to enjoy the views of the City. It was fun and because it’s free it’s definitely something good to do but I wouldn’t worry if I missed it. We stopped behind the clock on the way down and it was done!

I had about 2 hours left in Brisbane! So I marched back over to the Southbank, found the Brisbane sign near the Lyric theatre and walked past the wheel of Brisbane. It’s well priced at $22, I wish we had done it the night before as I bet the City looks amazing lit up.

An insta-friend had recommended The Terrace bar to me, so I thought that it would be a great way to finish the trip. It’s located on floor 21 of the emporium hotel, next to Southbank train station.

I was so glad I went, the views over the City are 10 out of 10. Service was really good and the drinks were pretty well priced. I had a caramelised peach mojito and green coast lager. I could have stayed there all evening, it’s definitely one I’ll recommend on to others.

Being so close to the station was good too, it cost $23 to get to the domestic airport from here, not much less than the taxi so a little pricey, but the journey was fine and there’s a Coles nearby to pick up snacks. The train takes about 30 mins. Then it was check in to the airport and back to Melbourne after a lovely little Brizzy getaway.