So I had arrived in Melbourne, ready to explore a bit of Australia for a few months. So one of the first things we did was book a flight up to the gold coast.

The gold coast is Queensland’s second largest City/Metropolitan, it’s south of Brisbane and the beaches stretch over 43 miles of pure paradise. 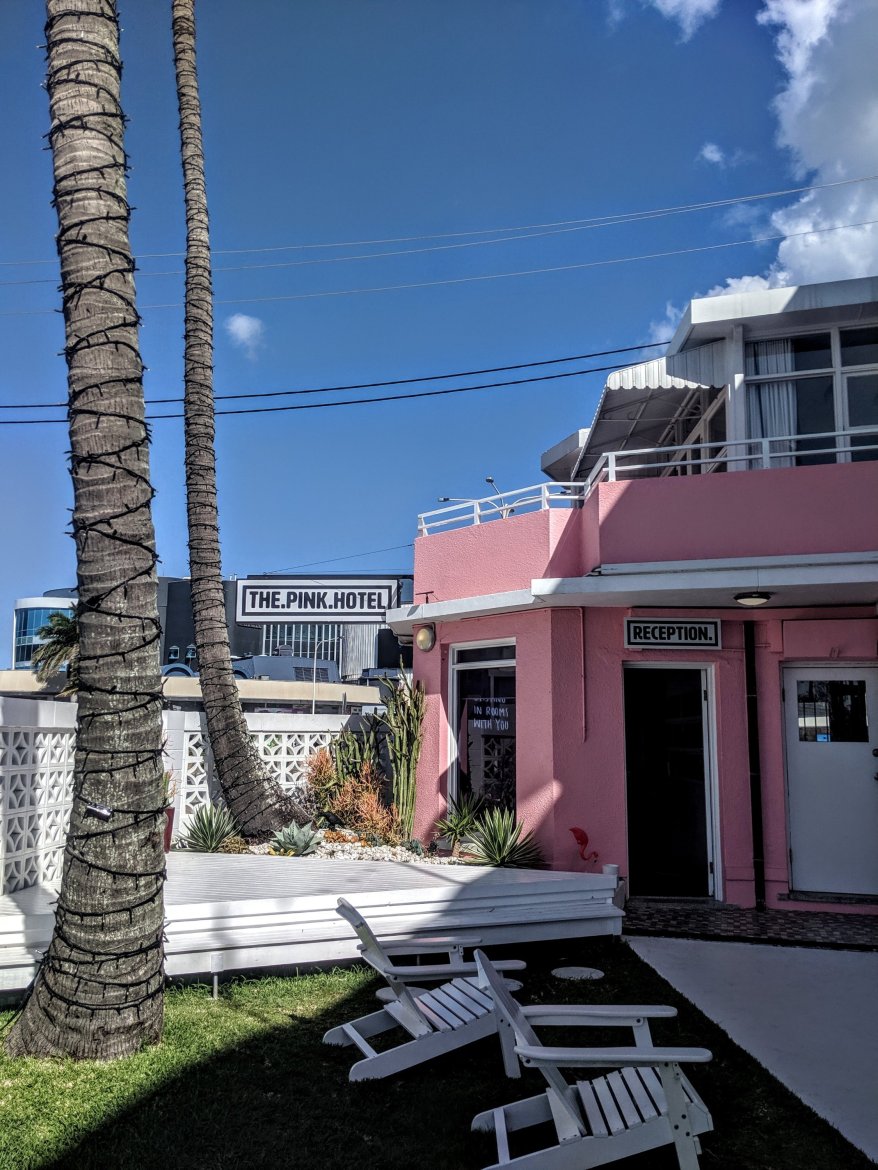 The flight is so quick, and we were soon in an Uber to our cute little home for the next two nights. The Pink Hotel in Coolangatta is Instagram friendly, comfortable and cool. With a secret piano bar, a rooftop terrace and a rock bar. 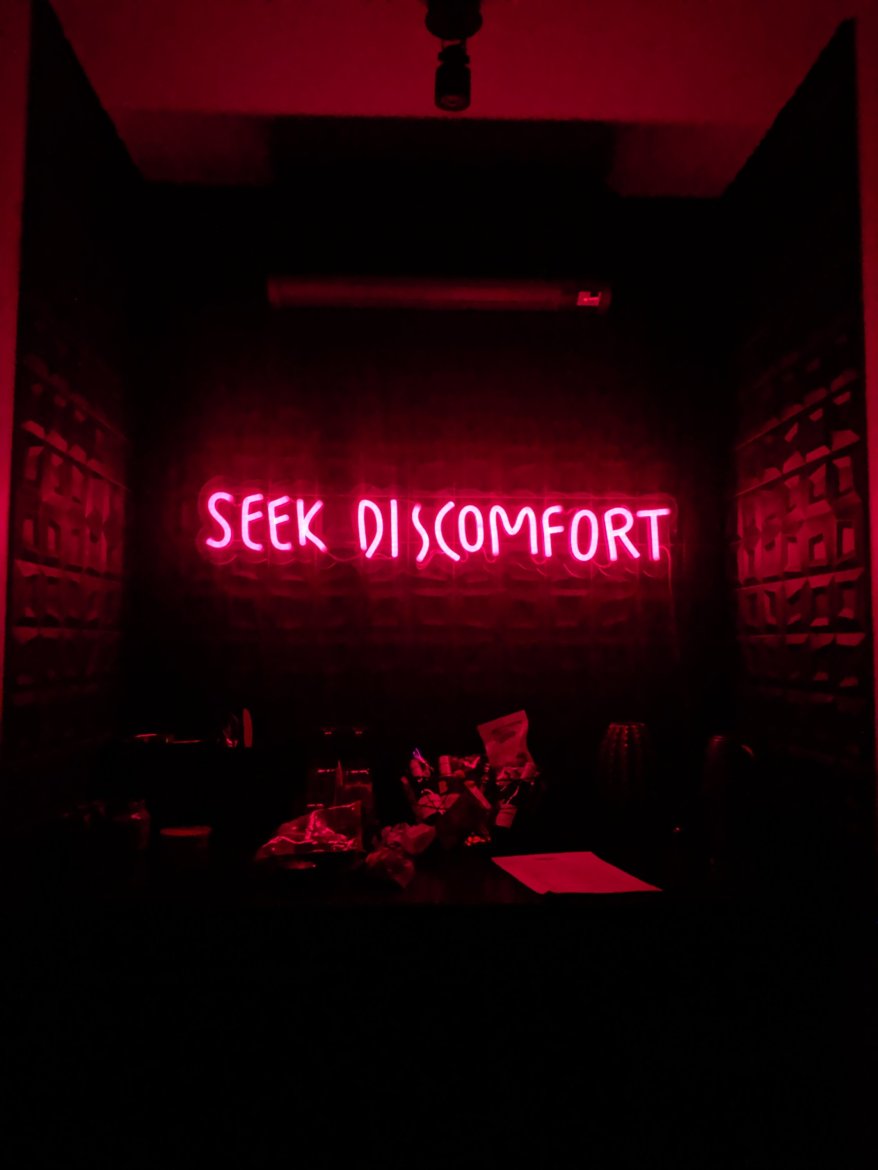 Check in was nice and easy, the rooms were large with interesting features. We loved the pink fluffy flamingo robes! 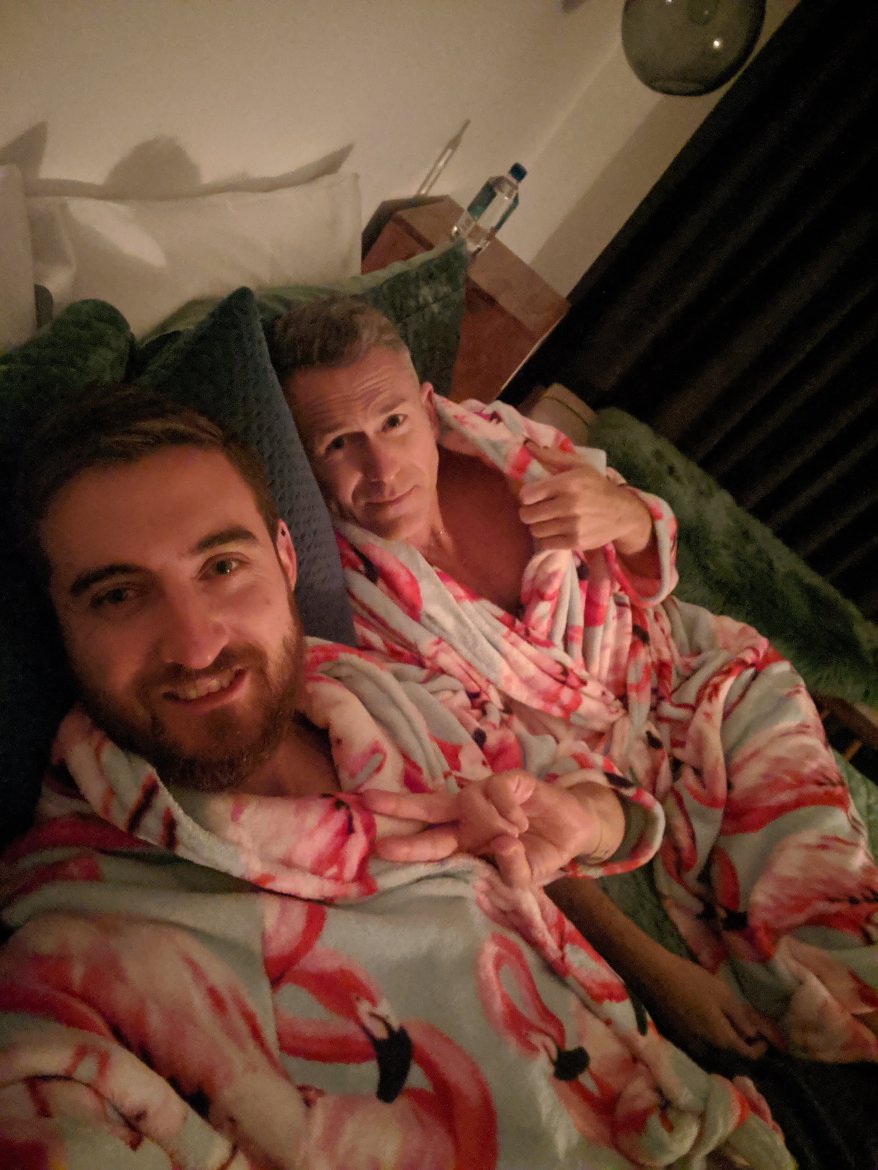 After a quick freshen up we went out to explore Coolie. It was warm but with a cold wind and we decided to walk up around snapper rocks and to point danger. The beach was white sand, clear blue water and plenty of surfers, it was paradise. 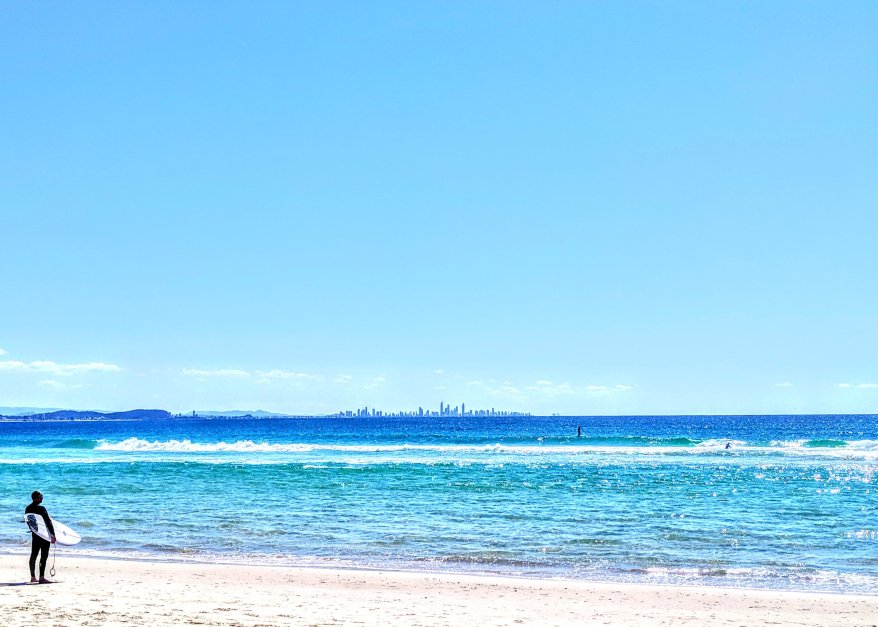 We were pretty hungry, so we stopped for lunch at this great little place on the main strip called Raw Energy. The food was so good and very vegetarian friendly. 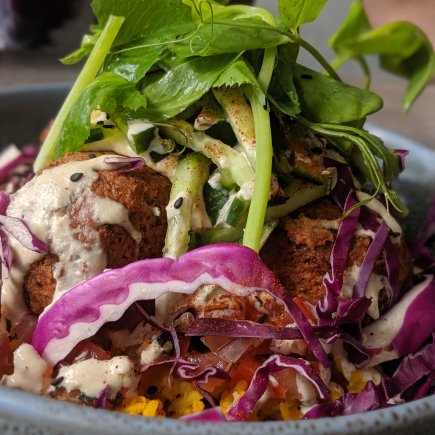 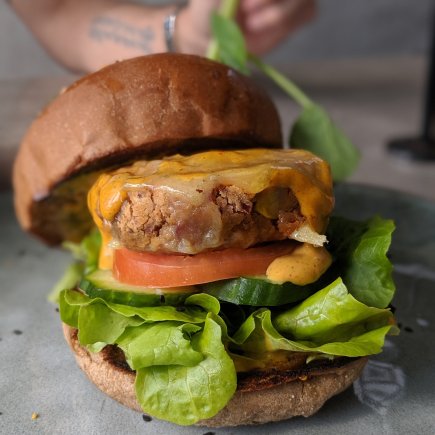 After that recharge we walked around the little peninsula at snapper rock, spotted brush turkeys, lizards and rainbow lorikeets, watched the surfers and enjoyed the beautiful views. 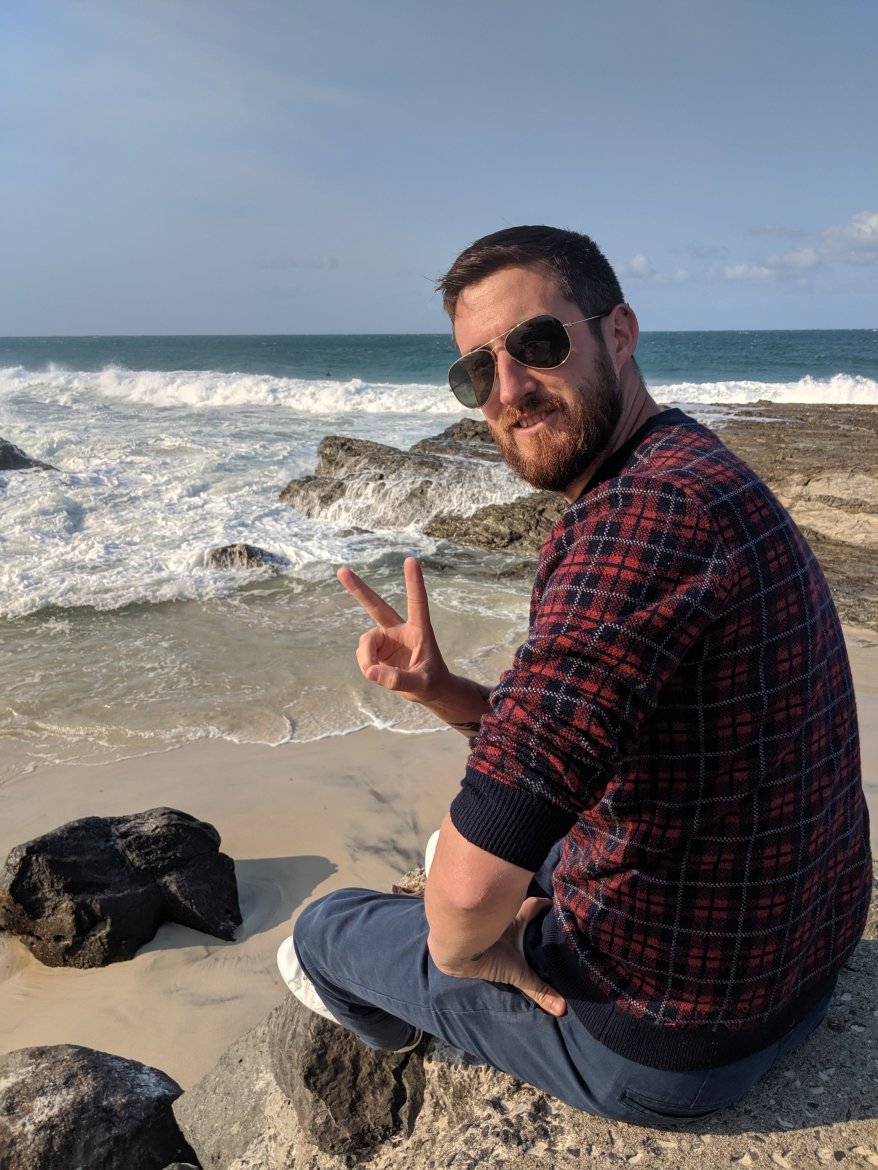 Up on point danger we looked out for whales, and checked out the monument to Captain Cook and some nice little war memorials. There were even turkeys up here! The views down the coast we stunning. 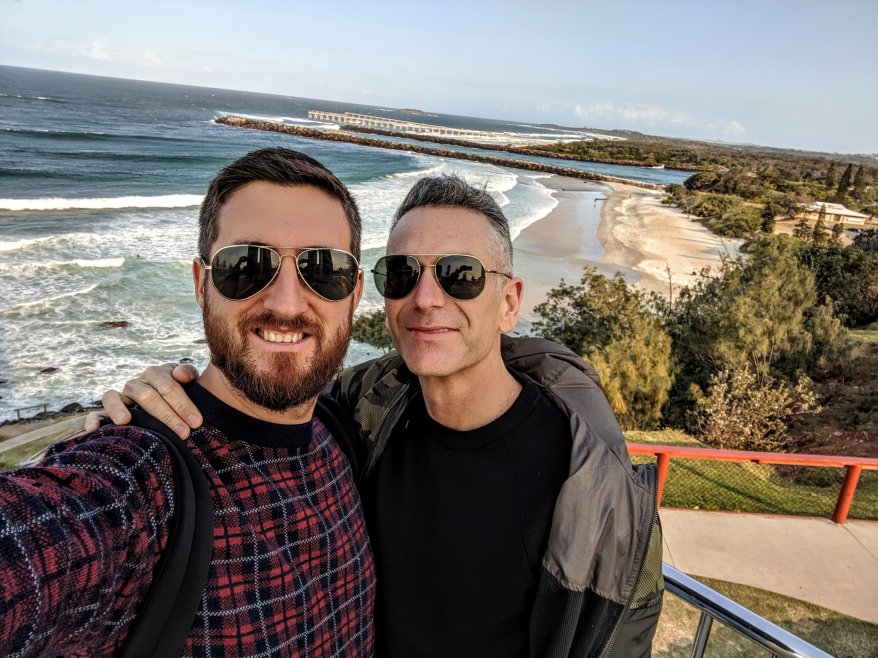 It was pretty windy up there, so we wandered back down and decided to stop for a beer. We chose the rainbow surf club, with it’s cute balcony overlooking the beach and ocean. 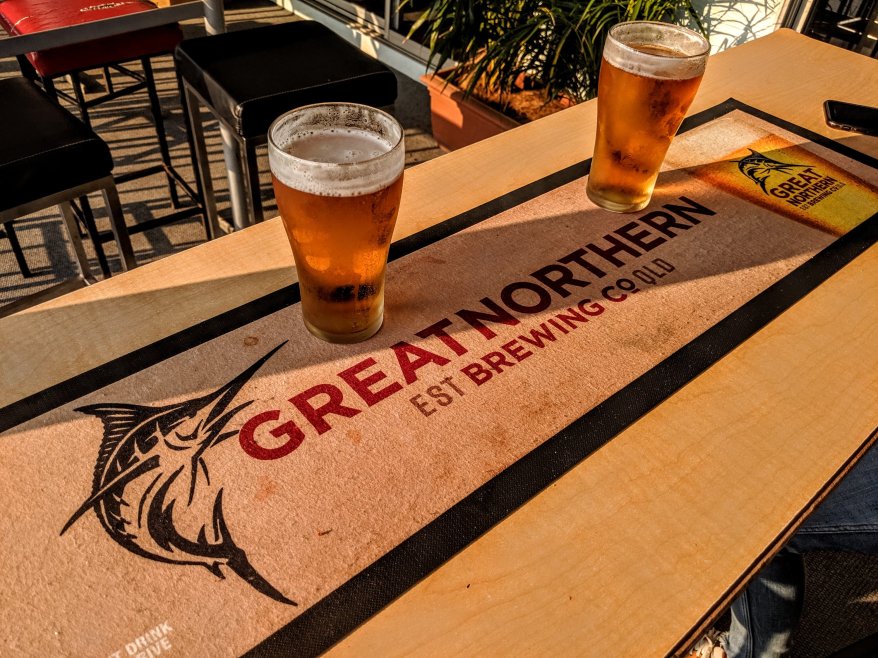 Lucky for us it was happy hour! So we sat and watched the surfers, the sun slowly going down and enjoyed ice cold beers. Then to our surprise we noticed fins in the water, and before we knew it a pod of dolphins started leaping, splashing and playing right in front of us to the backdrop of a hazy orange sun.

Sadly there were a lot of bushfires inland and you could see the smoke up high causing the sun to go an eerie red as it set. 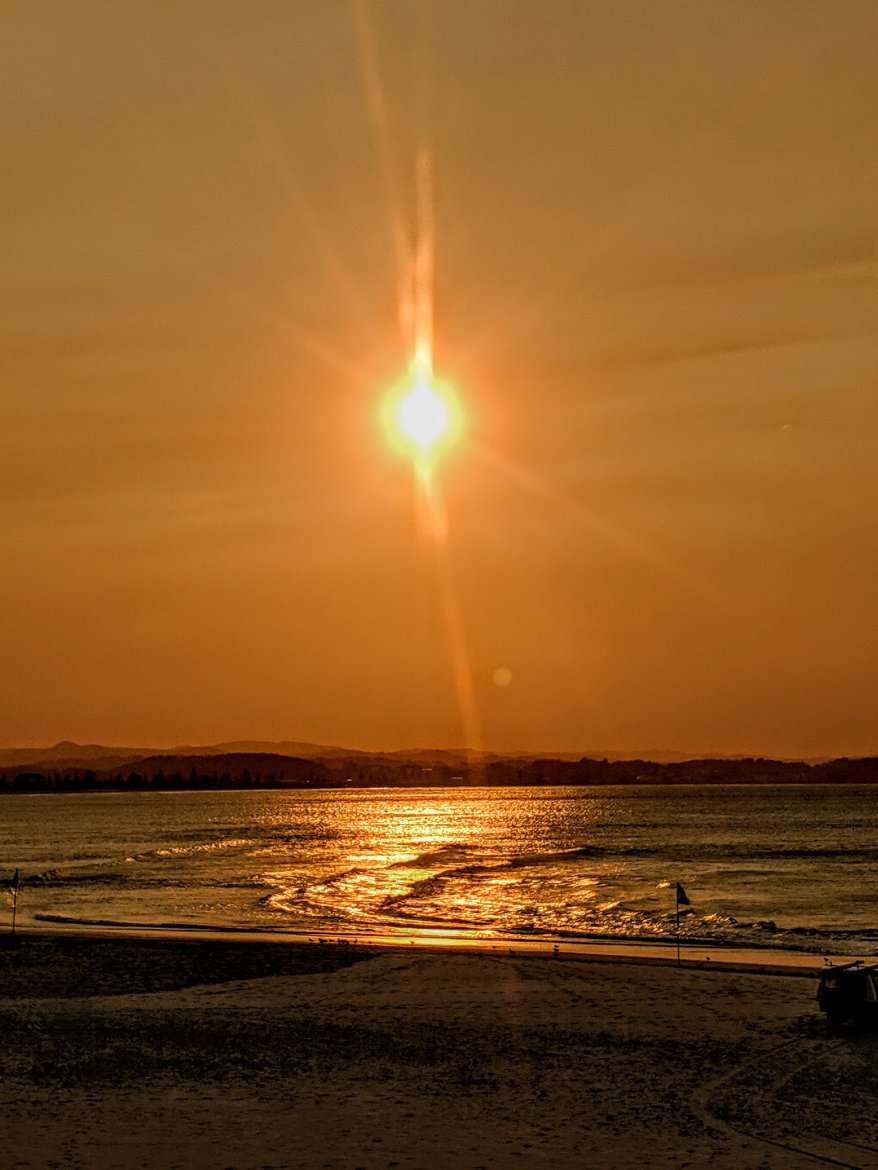 This was such a great experience so we were buzzing as we walked back to the hotel. We got changed and decided to try Eddie’s Grub house, the bar attached to our hotel. 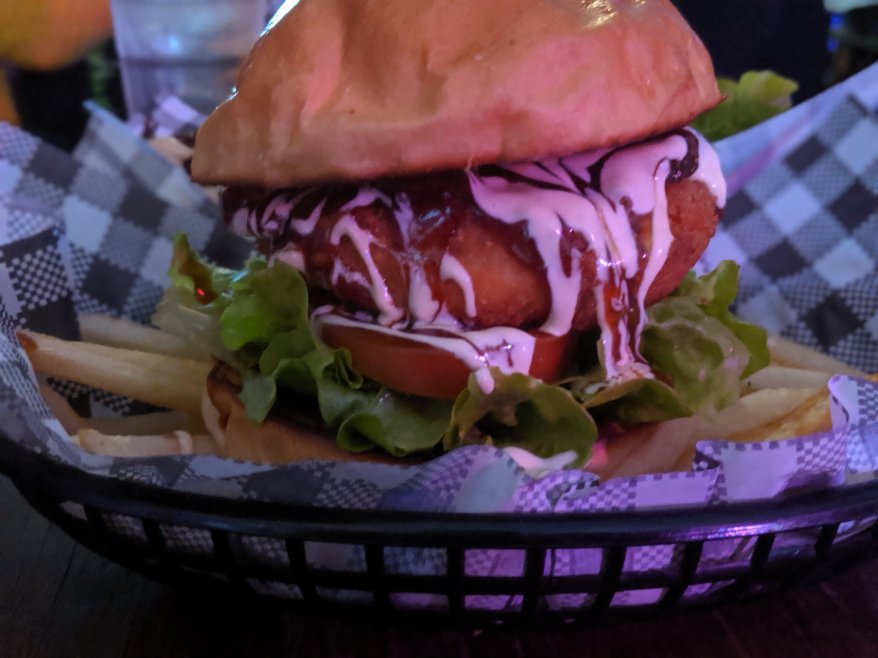 It was pretty cool, they had a really fun live band playing country/rock music. The beer was good and the food was delicious, especially the jalapeno hush puppies!

Filled up with great food, we walked over to an interesting statue, marking the divide between two states, Queensland and New South Wales. So we took a couple of fun pics of us in either state and took a little walk along the beach. We finished the night off with ice cream. 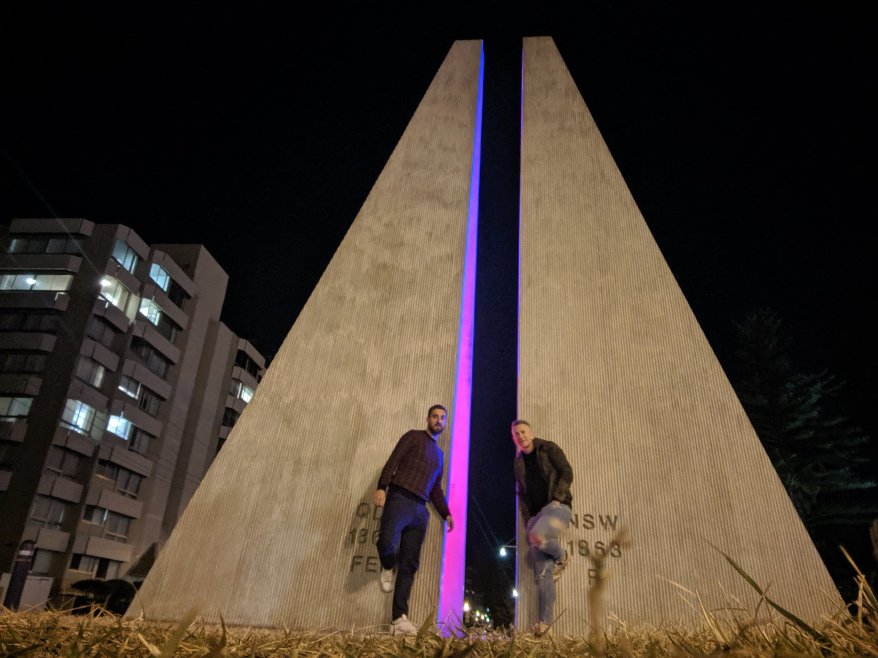 The next day we hit the beach, at first the weather was a little cold and wet, but by midday it had brightened up and we had fun paddling in the water, relaxing on the beach and enjoying our little picnic we had put together from the Woolworths on the main strip. 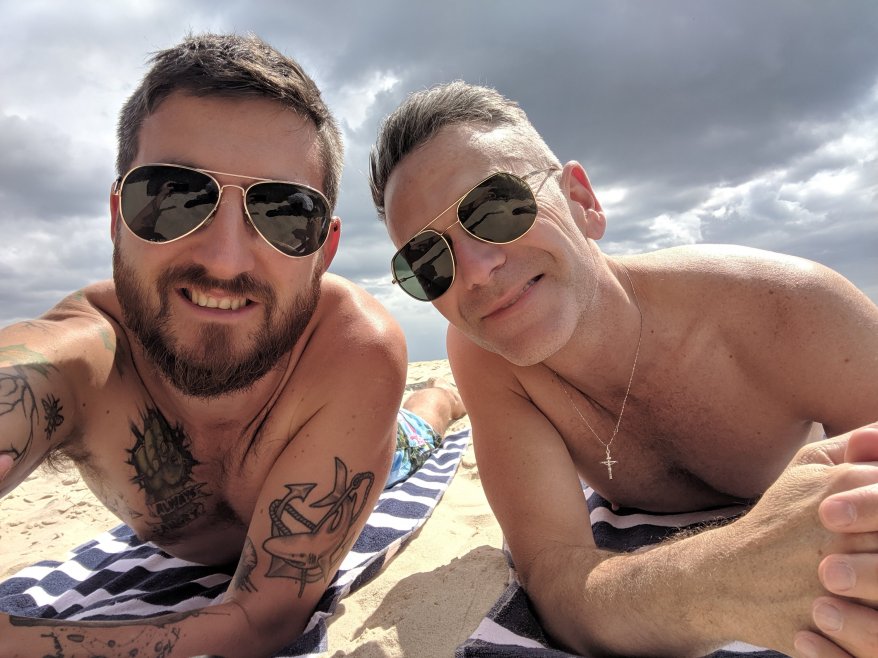 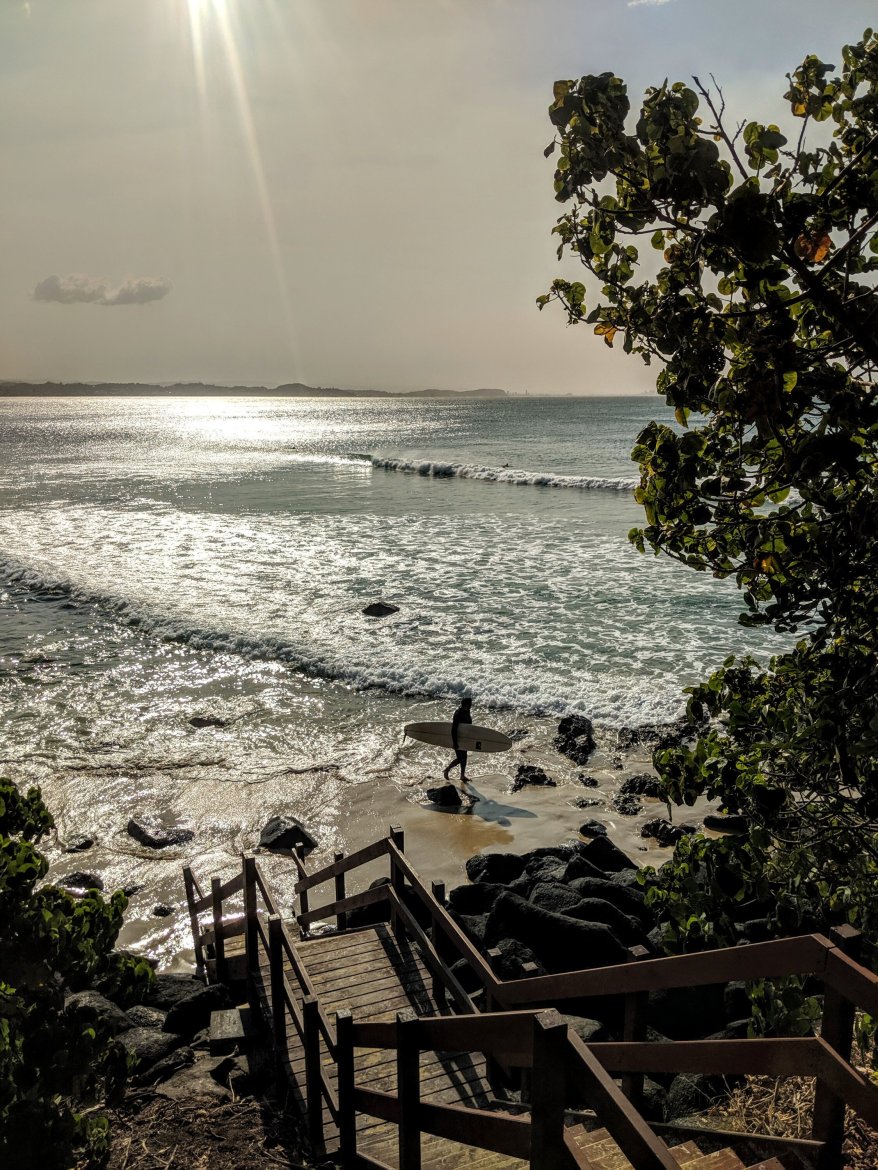 It was great to relax, and we spent most of the day here, going over to the rainbow club for more happy hour drinks and then enjoying the view from the top of the hotel.

Tonight we had a drink at the Coolangatta Hotel, watching the lorikeets come in to nest for the night. Then we walked over to have what is probably the worst pizza of my life. I always thought pizza was something you couldn’t get wrong, but Earth and Sea pizza restaurant managed it.

The pizzas came out with about a cm of water under the base so they were really soggy and super small for the price. Definitely avoid it!

It didn’t dampen our spirits though, so we got mcflurrys from McDonald’s and wandered back to the hotel. I peeked into the piano bar which looked really cool but we were getting up for sunrise in the morning so called it quits.

That morning we got up while it was still dark, got dressed and walked up to point danger. We stood looking out over the ocean, watching the sun slowly come up. Then the most amazing thing happened, we spotted something big come up out of the water and disappear.

There was a little pod of Humpback Whales swimming right past us! It was truly a breathtaking experience and my first time seeing Whales! Sadly they didn’t breach but they did a lot of tail slapping which was fun to see.

We were both super happy to enjoy this experience together, it’s definitely worth getting up early to catch a glimpse of these majestic animals. 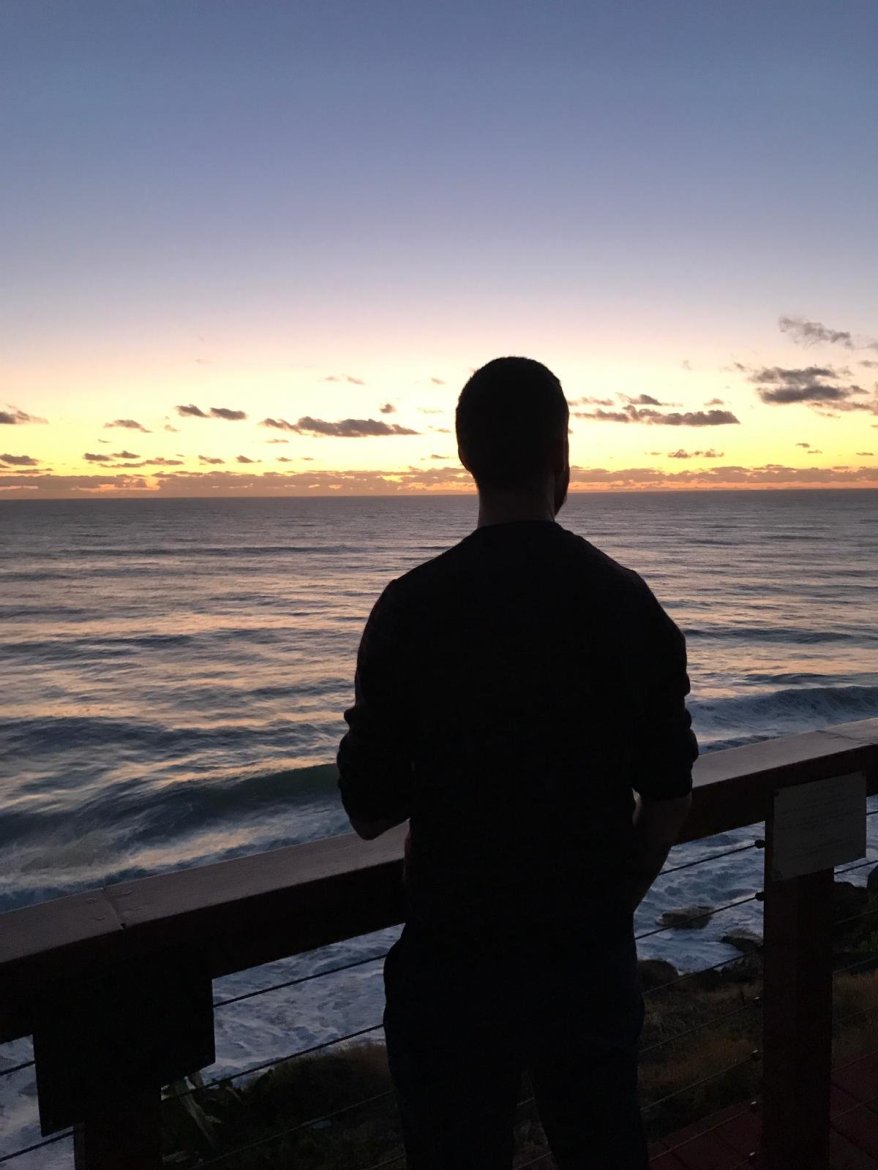 Breakfast was at the Bread Social, a really good bakery where we shared a blueberry custard donut and savoury eggplant pie. It was delicious and we’d definitely recommend going there for breakfast/lunch. 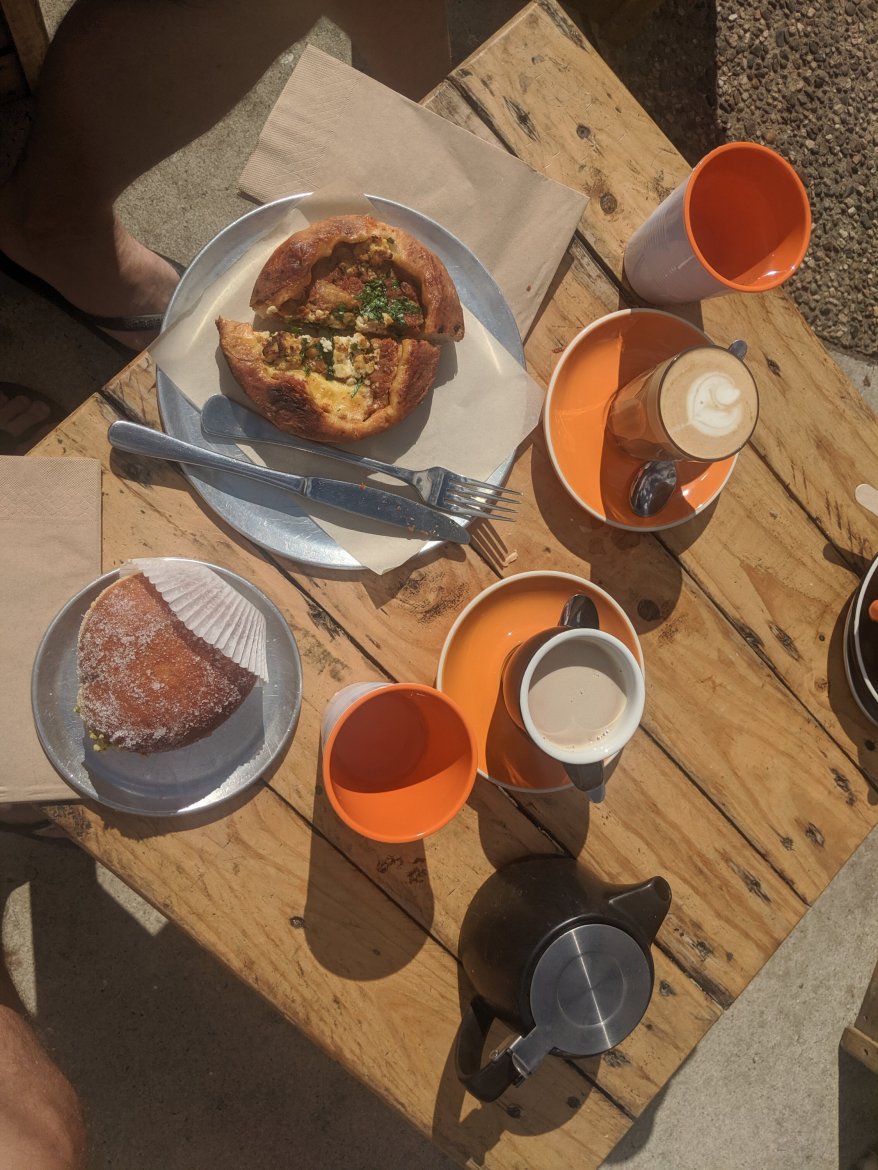 The rest of the day was spent on the beach, swimming in the cool clear waters, walking along the surf and then it was nearly time to go! We ate some tasty pokebowls on the hotel rooftop and then took a taxi back to the airport. It’s less than ten minutes away so it’s a great place to stay. 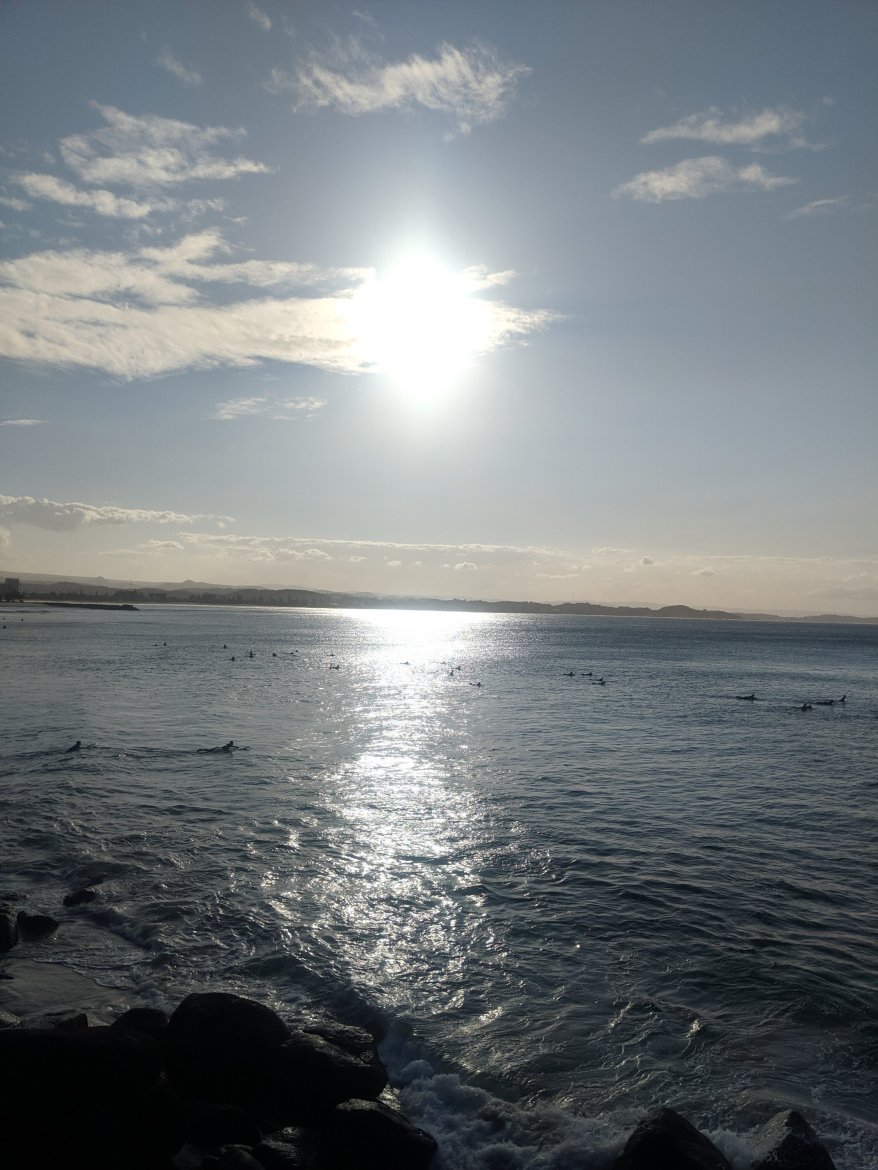 Then we were back on a plane to Melbourne, through the smoky haze of the forest fires which gave the landscape a weird look. 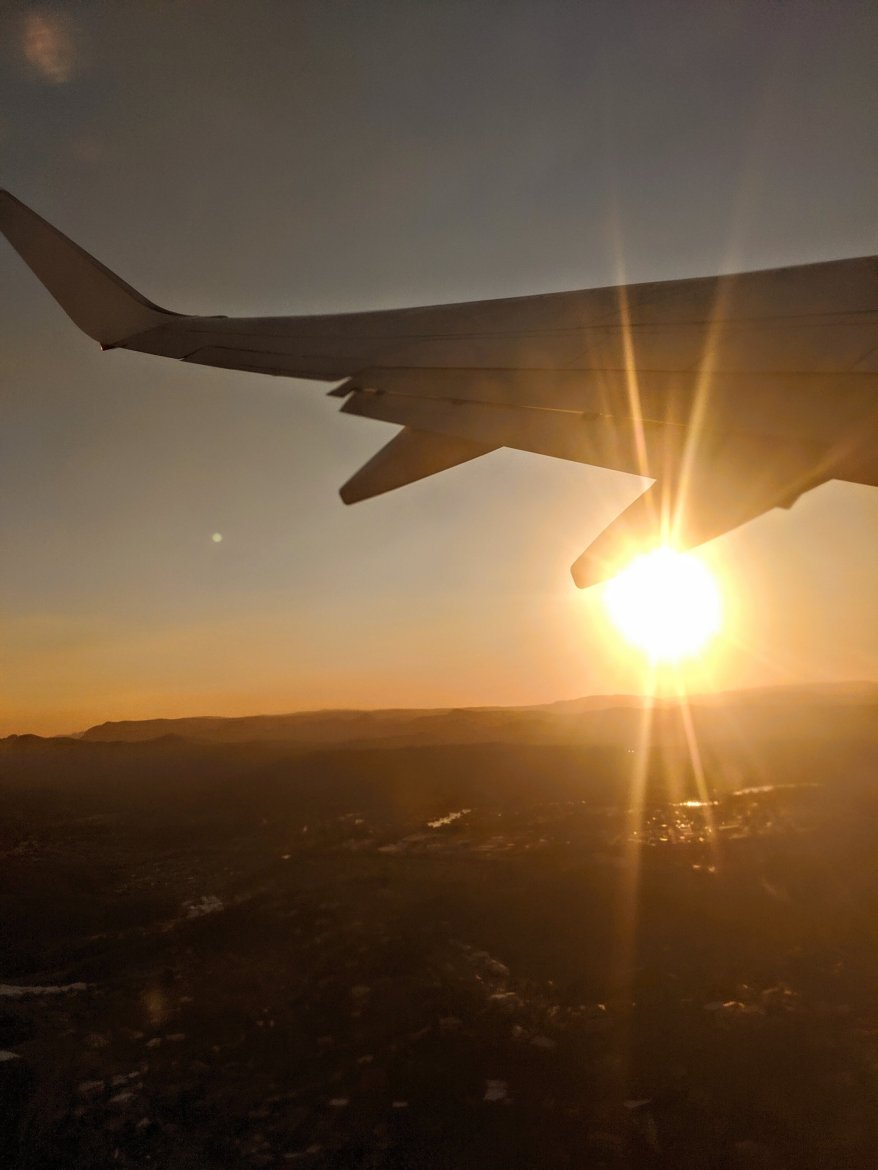 It was a great little getaway and we’d definitely go back to Coolie! I can’t wait to explore more of Australia.