Siquijor is a small island in the Philippines known for it’s mystical mountain healers, witchcraft and superstition. It’s also got some amazing little beaches and forest interior.

I was travelling there from Dumaguete on the ferry, which took around 2 hours and cost less than £2. We also saw dolphins on the relaxing boat journey! A real bonus. 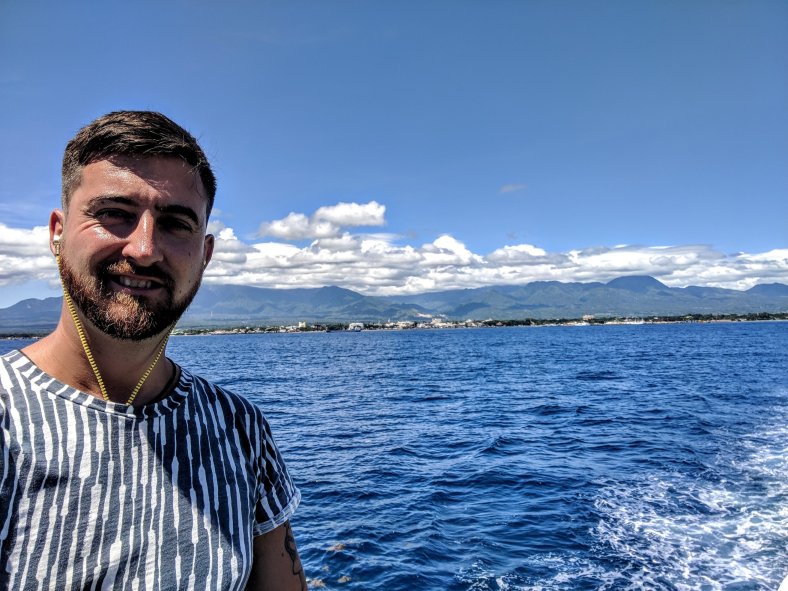 Like most places in SE Asia a huge group of tuktuks, taxis and taxibikes awaited us, so I showed one guy my hotel, popped a helmet on and off we went. There’s basically one road around the island, with a few smaller ones leading Inland, so it’s hard to get lost!

Arriving at the hotel it was around lunchtime, so I checked in and realised I was actually staying in a small shack in someone’s back garden. It was very basic but super cheap and I thought at least it’ll be an adventure. If it sounds up your street the hotel is Lagkaw sa Sawang.

I dropped my stuff off and decided to try out a jeepney, the bus like transports found all over the Philippines. It worked a treat as I jumped up into the back and, once at my destination paid and jumped off!

My destination was Paliton beach, a small expanse of white sand, turquoise waters and not much else. It was another little paradise and I lay here for the whole afternoon, swimming and reading. 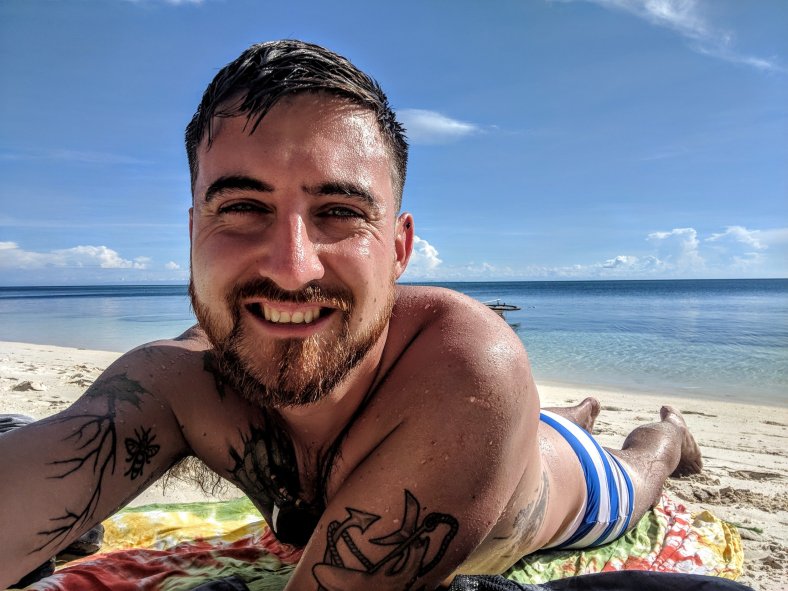 I got chatting to some guys who were opening resorts on the island who were a little bit cringe, but it led me to chat with two German girls and we sat enjoying the spectacular sunset and agreed to meet for dinner later.

The sun had set and it was pretty dark along the small track to the main road but wasn’t sure if I jeepney would be coming, so I started to walk to the next barangay which is like a village. From here I took a taxibike back to the hotel, got changed and went for dinner at a lovely restaurant called Baha bar. They did great vegetarian food and the beers were ice cold.

The next day I rented a motorcycle from the owners of my little hut for 300 peso a day, I was nervous but I had been on the back of bikes a few times now and got used to it.

So off I sped! My first stop on a island wide tour was the enchanted Balete tree. Around 400 years old it is said to have magical properties. It’s literally on the main road and after paying a 10 peso entrance fee you can sit under it, dangle your feet in a small stream and let fish nibble away. 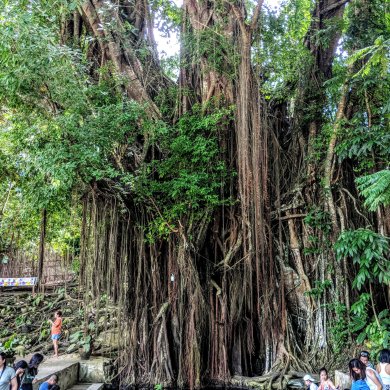 It was starting to get super hot now, so I decided to head up to Cambugahay falls. There are a few waterfalls dotted around the interior but this one is supposedly the best. You park up then walk down quite a few steps to be rewarded with this beautiful blue pool of water and cascading waterfalls.

I was in heaven and enjoyed cooling down in the second pool, watching people swinging into the first pool from little treehouse. I lay back under the waterfalls and watched the sunlight through the trees. 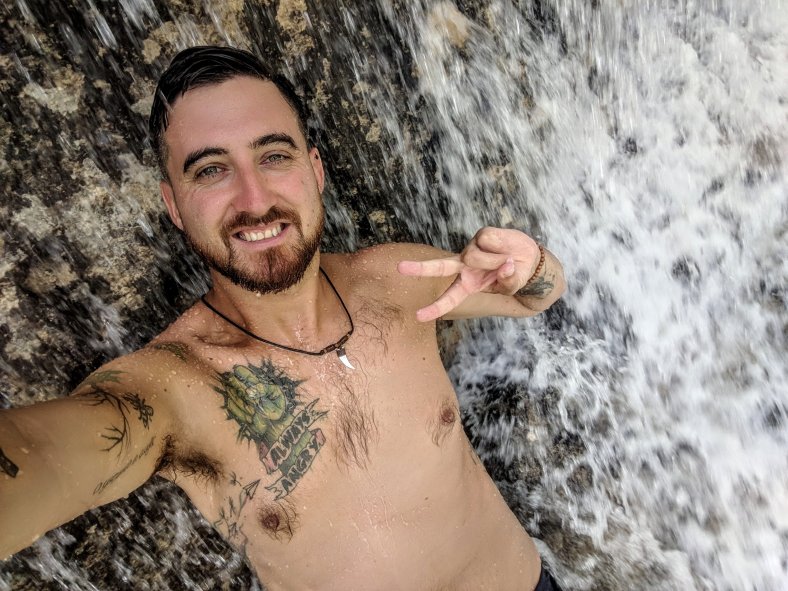 I had to have a go on the swings, it cost just 10 peso for a go, so I had a few and it was so fun! Swinging out and dropping into the beautiful water. I spent a couple of hours here just relaxing and enjoying the natural theme park.

So I carried on around the interior of the island, enjoying the views over the hills, when I noticed signs for a cave. So obviously I took the small dirt track to a dead end, where a guy took me down into the forest.

We ended up at a small cave entrance, and with a head torch we went in to explore. There was a bit of clambering and some cool formations in there along with bats, but it was probably only a 10 minute journey to the end and back. It was only £1.50 though. 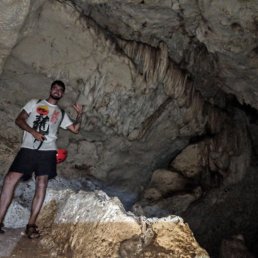 I was pretty sweaty and grimy by the time I got back to the bike. I met the girls again for dinner and drinks and then gave one a lift back to their hotel.

Today I was my last day here, so I was going to hit up another beach, and explore the interior more. So off I went on my little bumblebee bike to the opposite side of the island. Riding around is definitely the best way to get about, and the views from the bike were lovely.

Salagdoong beach wasn’t that great though. Compared to Paliton it’s busier with a restaurant pumping out music, what looked like a very rundown water park and two beaches that were really busy. I lay down and went for a swim, got an ice cream and did enjoy it, but I kept thinking of how great little Paliton was.

There are also meant to be some concrete boards you can jump into the sea from but I couldn’t find them. As we got into the afternoon I decided to get up into the mountains. Driving up I found a cute little hill to walk up and view the whole island from, it was epic. 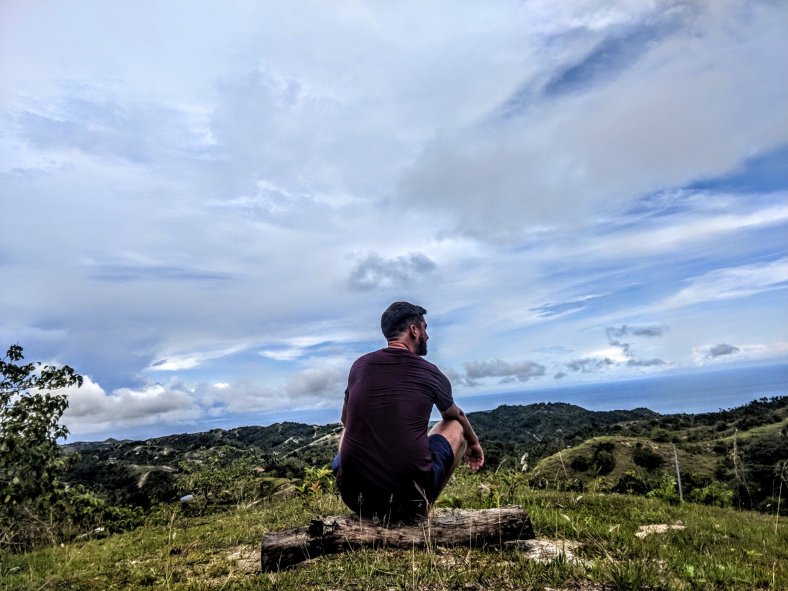 I got back down and as I drove off noticed a snake in the grass! I tried to swerve but didn’t have time so I either ran over it or just missed it, but I wasn’t going back to check! I drove on and went down past some gorgeous colonial buildings. I didn’t know what else to see and couldn’t make my mind up.

So I took a leisurely pace back to the hotel, when I went into my hut, there was a huge huntsman’s spider crawling along my stuff! I absolutely shit it. I couldn’t get past the spider to get a shower or fresh clothes. So I did what any sane person would do. Closed the door and left.

I went to the main town by the port and treated myself to pizza, chips and a banana shake, and tried to decide what to do. After a couple of beers I went back with determination. When I got there I couldn’t see the Huntsman anymore, but that wasn’t really a help. So I spent the night with all the lights on, attracting all kinds of insects. It’s fair to say I didn’t sleep much!

I had to laugh at myself, because I know that the huntsman aren’t dangerous, but I did not want to wake up with one on my face! I decided as I carefully packed my stuff up the next day that it’s all part and parcel of staying on such a mystical island.

Nothing like a crisp and cold Fat Yak to help you cool down in Brisbane. ✌️🦊 BREW serves great veggie food and a great array of beers. ♻️ . What's your drink of choice? I'll always revert to a nice beer. Cheers! 🍻 or in Welsh, Iechyd Da! 🏴󠁧󠁢󠁷󠁬󠁳󠁿🍺
The beautiful white Hsinbyume Pagoda outside of Mandalay. It's a short but pretty boat road up river leads to several amazing pieces of architecture. It's based on the mystical Sulamani pagoda from Buddhism. 🇲🇲💛 . You can spend a good few hours exploring this area, and there are plenty of photo opportunities for the 'gram ✌️🦊😆
Just over two weeks until we start our adventures again. Heading back over to Melbourne for a month and on to Mexico! ✌️🦊 Just 11 night shifts to go 😆🏥
Nothing like being rewarded with scenic views after a hike through the woods. ✌️🦊 . What can we all do to help the environment?? I've been cutting down on all plastics, been vegetarian for 2 years now and I use public transport. My one vice is flying! What good advice do you have??? Let's share! . Picture by @bokudesu ♥️💜🧡
🦊✌️Introduction Time! ✌️🦊 . I recently realised thanks to @thehackerette that I'm not as social on social media as I thought. So here's a few facts about me! 📝 . My name's Tom, I'm currently 32 and I'm from a small country in the UK called Wales! 🏴󠁧󠁢󠁷󠁬󠁳󠁿 I identify as gay, and I'm proud to support the LGBTQA+ community, and I'm a strong believer in peace and love over hate. 🌈♥️ . I live and work in Manchester, one of the biggest cities in the UK. I work as a nurse, and I love every minute of it. 🇬🇧💂 . In 2017 after travelling around the Balkans for a couple of weeks I decided to quit my regular job and work through an agency. This has allowed me to visit sooooo many countries over the past few years. I love that I can do both things that I love, travel and caring for people. 👨‍⚕️⛑️ . I'm a huge Arsenal FC fan, I love Nintendo, anime and anything Marvel. I currently have 16 tattoos and I'm a bit addicted. ⚽🎮 My partner @bokudesu lives all the way in Australia so we're currently experiencing a very long distance relationship! 🇦🇺🌏 . If you've made it this far, and you want to know more, just ask!! 😁🙈🙌
Did you know Canberra is the capital of Australia??✌️🦊 . If you're visiting, make sure you check out the Anzac parade, this boulevard runs from the man-made Lake Burley Griffin up to the Australian War Memorial museum. 🇦🇺🌈 . Along the parade are memorials to each war that Australia has been involved in, starting with this, The Boer War in South Africa. Australia supplied around 43,000 horses to the war which was mainly fought by mounted infantry. 🌍🐎
Dreaming of sand, sea and sunsets ♥️ . Where's your first 2020 destination?? 📸🌍
GIANT ALERT! 😲✌️ Meet Rambo, the giant merino ram. 🐏🇦🇺 . Fun fact, Australia is full of big things! When taking a road trip, make sure you coordinate your rest stops to take in such beasts as the big avocado, big shrimp, big banana and big koala! 🥑🦐🍌🐨 . It's also more important than ever to visit those places that have been affected by fires and spend your money there. Every little helps in these rural communities. ♥️ . 📸 By @bokudesu
Tell me one thing that you love about your City? ✌️🦊 . One of my favourite things about Melbourne is the Yarra River that runs right through it. It's great for sunny walks along the banks, drinks at one of the many riverside bars or a picnic in the adjacent parks. They really know how to utilise the waterways down under! 🇦🇺🏳️‍🌈😁 . You can even rent a boat out through @goboatmelbourne and enjoy the river on the water. 🥂🥗🍦