So I arrived in Cebu, and knew I wouldn’t get to Oslob, my next destination until the following morning. So I took the bus from the airport into the centre which was really easy. Then took a grab bike to my hotel, it was a cute place I ate in their restaurant and went to bed early.

I was up at 6am ready to walk over to the South Bus terminal. It was easy to find the correct bus and staff were helpful in buying a ticket etc. The bus takes around 3 and a half hours, it actually got pretty busy too as we wound our way South. It also only cost about £2! You can do a day tour but these can cost up to £80 each.

I was heading to a place where you’re guaranteed to see whale sharks, and as I had got closer to the day I started to read that it was a bit controversial. There are arguments on both sides of this, with some saying that by feeding the whale sharks the fishermen are interrupting their natural migration.

There were also issues with boats injuring the sharks, however there is also research that shows the coral and fish in the area are flourishing because the fishermen are no longer using poor techniques to catch, as they’re making money from us tourists. Plus the local government are continuing to introduce stricter rules when it comes to entering the water and numbers visiting.

I decided to check it out, I’d like to say it was out of interest but I definitely wanted to see these magnificent animals. They’re the biggest fish in the world, and are beautiful gentle beasts.

I arrived in Tan-Awan where I was staying, dropped my stuff off at the hotel and went straight to the Sharks. I got offered a few prices as I walked up, just ignore them and go straight to the people there. It cost me 1000 peso, which was around £15. 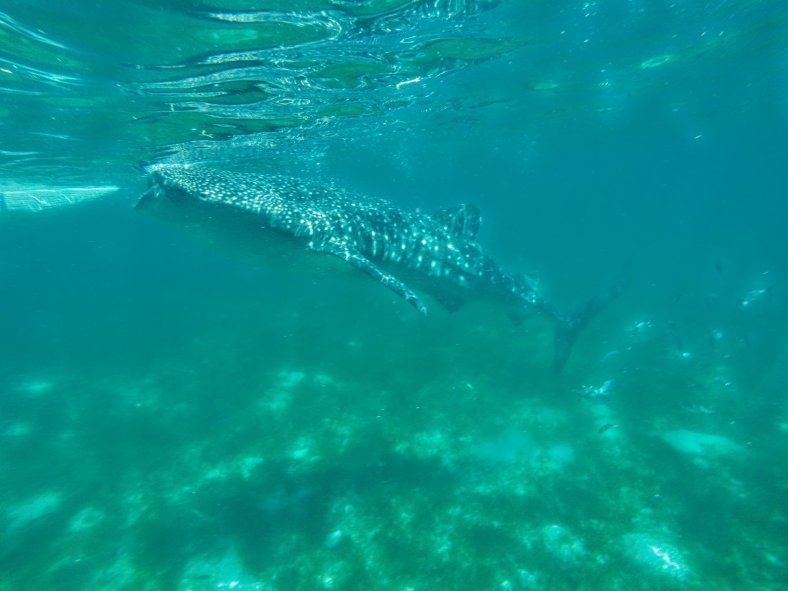 We sat through a very thorough guidelines video and talk of the dos and don’ts once we got in the boats, we had to shower before leaving to wash off any sunscreen as it’s damaging. The people working there genuinely seemed to care about the whales but it was pretty hectic.

Once in the boat you get taken out to a spot, jump in with snorkels and watch as the sharks glide past. Surfacing now and again, you couldn’t touch or go within 3 feet of them. Although the fishermen try to control the tourists there are some that are ignorant and try to get close. Also a lot of the tourists couldn’t swim but still jumped in and started thrashing about. So watch out for arms and legs that could hit you.

I was amazed by it all, I’m usually nervous being out of my depths and sharks terrify me, but I think I was so in awe of them that I didn’t even think about it.

The only thing I found uncomfortable was just the number of people in the water at the same time, and I’ve read that they are limiting numbers more and more which is good. 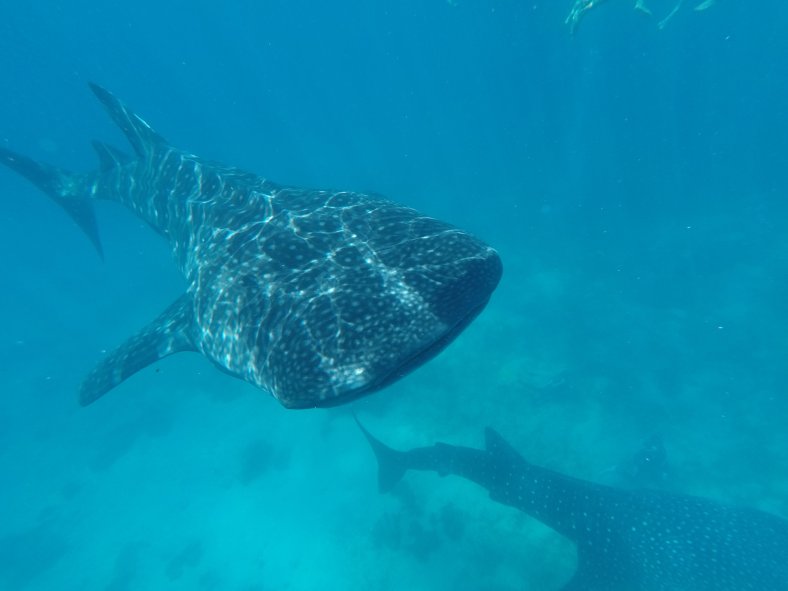 After the buzz of seeing these amazing sharks I decided to keep the adventure up and go to some nearby waterfalls. It cost 200 peso for return trip in a mototaxi, 20 peso entry and 60 peso return for motorbike down to the falls from the carpark. It’s only about 15 mins from the village.

Tumalog falls were incredible, totally different type of waterfall to what I’m used to. It’s about 100 metres tall, and instead of a steady flow of water it sprays down the side of this cliff sparkling in the sunlight. There’s a huge pool at the bottom that you can swim and relax in. Plus the rainforest environment is beautiful to relax in.

I spent a good two hours here, the water was cold and refreshing in the heat and I couldn’t stop looking at the waterfall from different angles.

After a full day I finally checked in to my hotel, Casa Bonita and chilled out for a bit then went for a wander around the little village. There wasn’t much going on, but there are a couple of little stores selling food and a few restaurants. I ate at the hotel again. Some lovely fried veggies and rice. Then I was ready for another busy day tomorrow.

Are you planning any Pride events this year? 🏳️‍🌈🦊 . Manchester Pride released their first tickets for the 2020 event this week! Held on the August bank holiday, it's A whole week of celebrating all things LGBTQA+. 👩‍❤️‍💋‍👩👨‍❤️‍💋‍👨💅 . Last year @sarahhunt90 @leia859 and myself marched for the first time and the love we got from the crowds was such a life affirming feeling. 🌈😁🤳
Which City would you go back to time and again?✌️🦊 . The classic red telephone box in London. A City I've visited so many times and yet I feel like I've barely explored half of it. 💂🇬🇧 . It's also a great queer destination, with the classic Soho area full of queer bars and shops and the more alternative Vauxhall just across the Thames🏳️‍🌈♥️💜💛
Nothing like a crisp and cold Fat Yak to help you cool down in Brisbane. ✌️🦊 BREW serves great veggie food and a great array of beers. ♻️ . What's your drink of choice? I'll always revert to a nice beer. Cheers! 🍻 or in Welsh, Iechyd Da! 🏴󠁧󠁢󠁷󠁬󠁳󠁿🍺
The beautiful white Hsinbyume Pagoda outside of Mandalay. It's a short but pretty boat road up river leads to several amazing pieces of architecture. It's based on the mystical Sulamani pagoda from Buddhism. 🇲🇲💛 . You can spend a good few hours exploring this area, and there are plenty of photo opportunities for the 'gram ✌️🦊😆
Just over two weeks until we start our adventures again. Heading back over to Melbourne for a month and on to Mexico! ✌️🦊 Just 11 night shifts to go 😆🏥
Nothing like being rewarded with scenic views after a hike through the woods. ✌️🦊 . What can we all do to help the environment?? I've been cutting down on all plastics, been vegetarian for 2 years now and I use public transport. My one vice is flying! What good advice do you have??? Let's share! . Picture by @bokudesu ♥️💜🧡
🦊✌️Introduction Time! ✌️🦊 . I recently realised thanks to @thehackerette that I'm not as social on social media as I thought. So here's a few facts about me! 📝 . My name's Tom, I'm currently 32 and I'm from a small country in the UK called Wales! 🏴󠁧󠁢󠁷󠁬󠁳󠁿 I identify as gay, and I'm proud to support the LGBTQA+ community, and I'm a strong believer in peace and love over hate. 🌈♥️ . I live and work in Manchester, one of the biggest cities in the UK. I work as a nurse, and I love every minute of it. 🇬🇧💂 . In 2017 after travelling around the Balkans for a couple of weeks I decided to quit my regular job and work through an agency. This has allowed me to visit sooooo many countries over the past few years. I love that I can do both things that I love, travel and caring for people. 👨‍⚕️⛑️ . I'm a huge Arsenal FC fan, I love Nintendo, anime and anything Marvel. I currently have 16 tattoos and I'm a bit addicted. ⚽🎮 My partner @bokudesu lives all the way in Australia so we're currently experiencing a very long distance relationship! 🇦🇺🌏 . If you've made it this far, and you want to know more, just ask!! 😁🙈🙌
Did you know Canberra is the capital of Australia??✌️🦊 . If you're visiting, make sure you check out the Anzac parade, this boulevard runs from the man-made Lake Burley Griffin up to the Australian War Memorial museum. 🇦🇺🌈 . Along the parade are memorials to each war that Australia has been involved in, starting with this, The Boer War in South Africa. Australia supplied around 43,000 horses to the war which was mainly fought by mounted infantry. 🌍🐎
Dreaming of sand, sea and sunsets ♥️ . Where's your first 2020 destination?? 📸🌍