Today I was off to check out one of the biggest tourist sights of Hong Kong, Tian Tan Buddha! To get there you take the subway out to Tung Chung, from here you can either hike or take the cable car. I chose to take the cable car and treat myself to the glass bottomed booth. On reflection I wish I had prepared and hiked to the Buddha and taken the cable car back. The walking route looked really cool, I’m not sure how long it would take but the scenery was amazing from the car as we flew over the bay and up into the mountains. 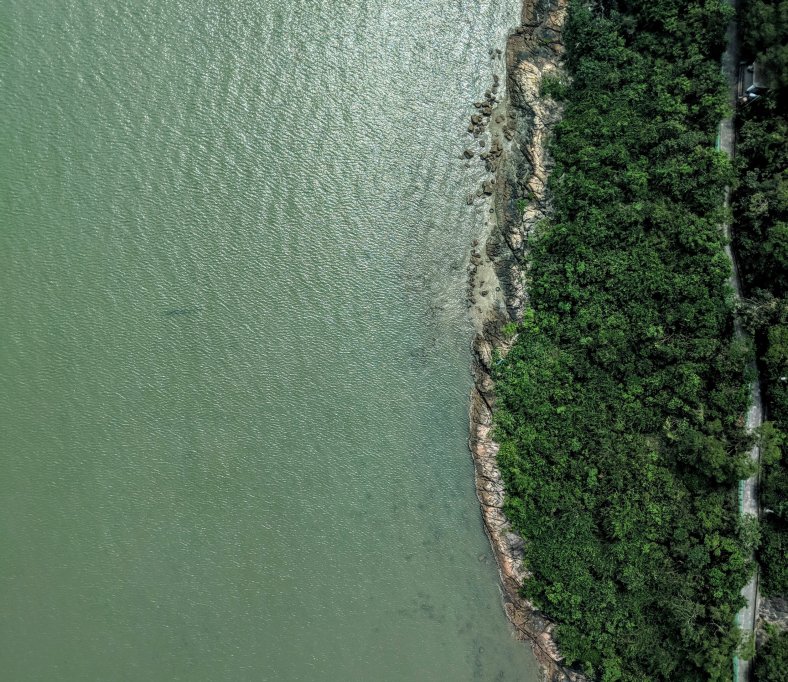 On arrival you wander through a touristy village area with shops and restaurants, before you pass under a lovely archway and past statues of the Chinese Animal signs for each year. This leads to a huge square with steps heading straight up to the huge bronze statue of Buddha. It was completed in 1993 and symbolises the close relationship between man and nature.

It’s pretty impressive, there are quite a few steps to get up to the base of the Buddha, but there’s a small art gallery underneath with air con which I used to cool down. The Buddha is surrounded by six smaller bronze statues that represent the six perfections that are necessary for enlightenment.Not only is the Buddha amazing, but the 360 views you get of Lantau Island and out towards the airport.I had such a good time here and would definitely recommend it! I took the cable car back down after looking for souvenirs in the village, and took the subway back into the City.

My next stop took me to East Tsim Tsa Tsui stop, where Bruce Lee was only a short walk away! Usually found on the Avenue of stars, it was being renovated when I visited and all the famous statues and hand prints are now found at the nearby Garden of stars. There are also other famous statues and handprints from Chinese stars such as Jackie Chan and MIchelle Yeoh. This is a fun thing to do in the City and something I was really excited to see and get a selfie with Bruce!

From here I headed to Nathan Rd, this is one of the main shopping streets with smaller roads interconnecting more shops, restaurants and malls. So I wandered around here for a while, picking up some ubiquitous bubble waffles and bubble tea. I ordered chocolate waffles and matcha tea and both were super tasty. I wasn’t sure where to go next so I checked Google maps and noticed a cartoon avenue! Similar to the avenue of stars, this avenue is filled with famous Hong Kong comic stars with the iconic pig Mcdull being the most recognisable. This was definitely a fun little side adventure and it took me out of the heat of the City and into Kowloon park, it’s a green oasis amid the bustling, chaotic streets surrounding it. There are a couple of nice little ponds and fountains and the shade was beautiful and cool. It would definitely be great to grab some street food from one of the many vendors on Nathan Rd and retire to the park for a little picnic. 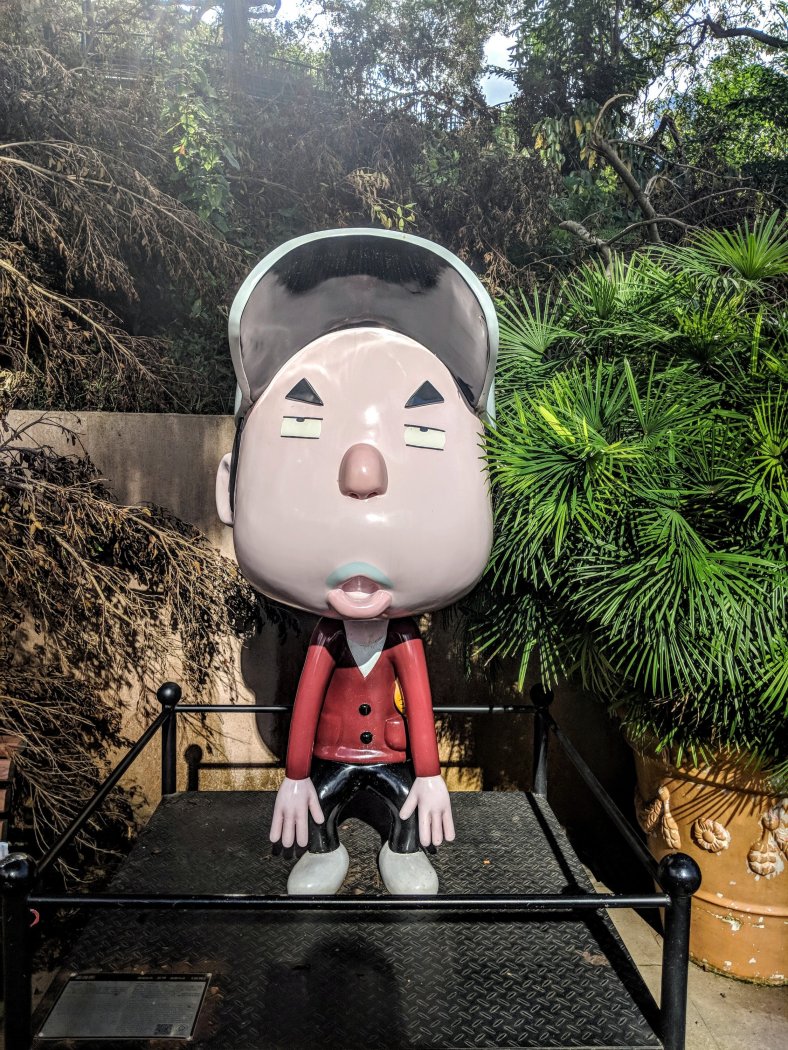 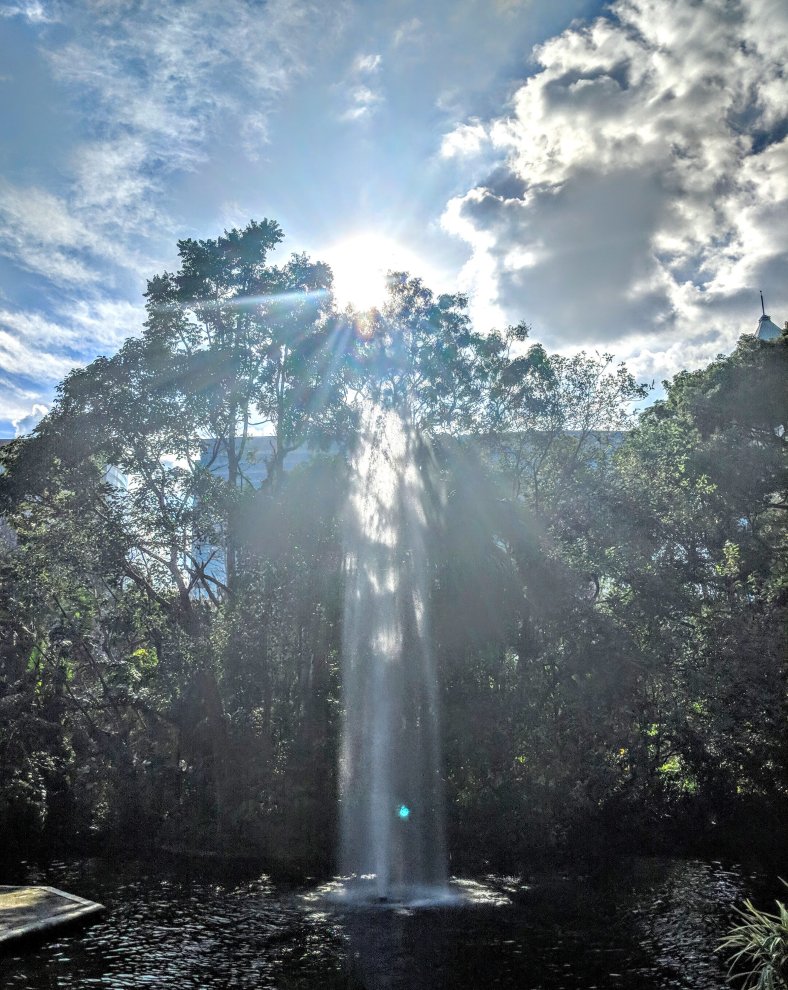 Next on my little tour was Chungking mansions, known as one of the cheapest places to live in Hong Kong it’s filled with a multiculturalism rarely seen. Although it’s mostly residential, you can find various restaurants from around the world here, lots of electronic and clothing stores and foreign exchange offices. I actually thought it was the more famous and instagrammable Montane Mansion and I wandered around for a while trying to find the iconic view of the apartments. I soon realised I was mistaken but I bought a couple of T shirts and the diversity of the shops was really interesting.

My next location is a must for anyone visiting Hong Kong, it’s cheap, easy to do and you get amazing views and a fun little boat ride, it is of course the star ferry! The area around Tsim Sha Tsui pier is nice to have a little wander, with the old railway clock tower and nice views of Hong Kong Island. The actual ferry costs HK$2.70 for a top deck seat which is definitely worth the little ride. I did think I would be on one of the red sailed junk boats at first so don’t be disappointed! It also helped that the ferry would take me back over to the Central ferry pier and HK island. 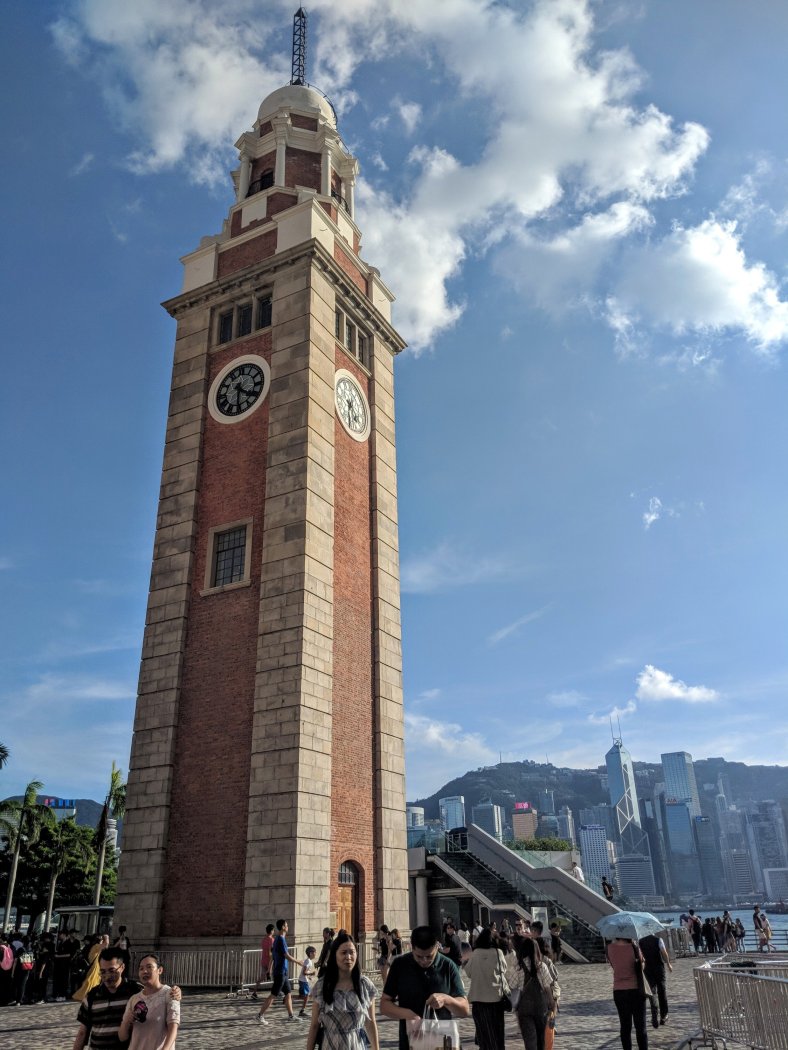 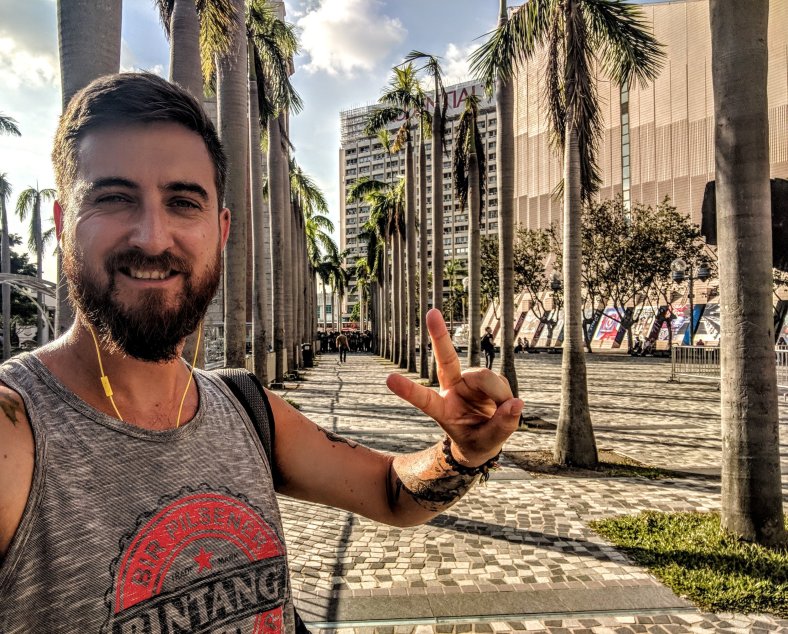 I enjoyed sailing across Kowloon bay and it was great to get shots of both sides of Hong Kong, it’s such a huge City, I don’t think I’ve ever seen so many skyscrapers clustered together. I arrived back on the island and relaxed back on the pier for a little while thinking about what to do next and enjoying the cool sea breeze.

After a pretty full day I decided to take a nap and then get ready to go out in the evening, I wasn’t sure where to head and then remembered the Temple Street night market up on the mainland was meant to be a cool place. So I got ready and took the subway to Jordan, which is just a short walk from the markets. It feels like a different place on the mainland, busier, more neon lights and signs everywhere and maybe a bit more of how I imagine the rest of China would be in the Cities. 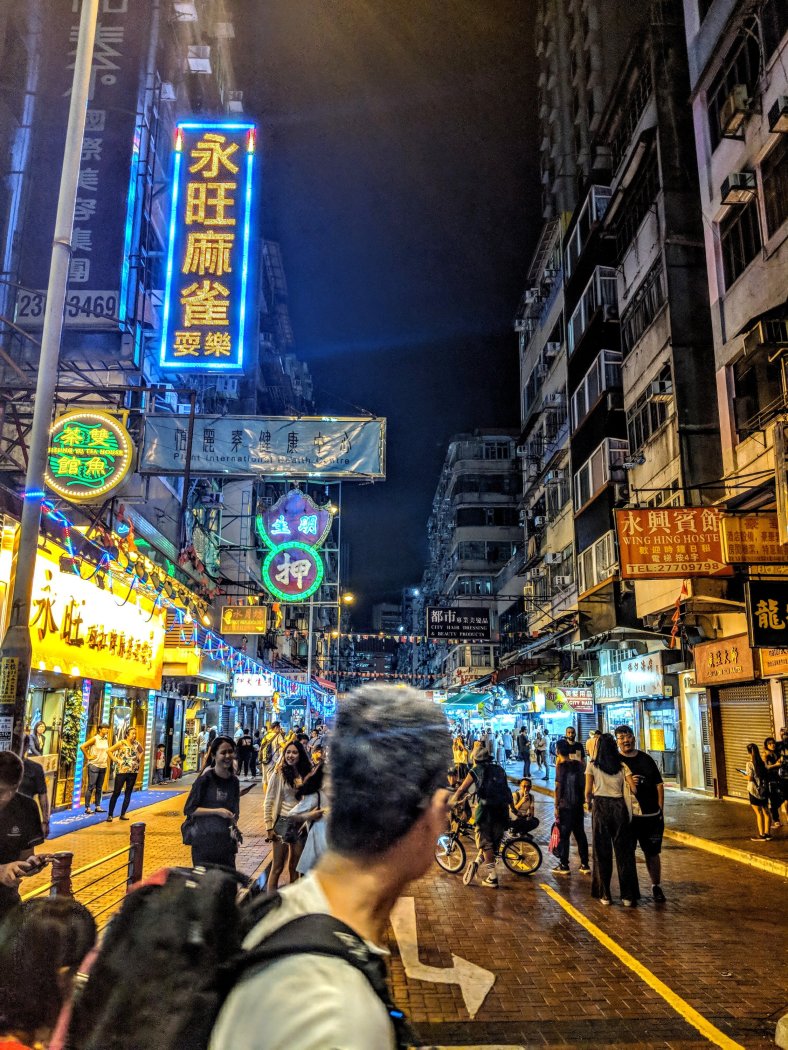 The markets were good, with loads and loads and loooaaddss of souvenirs, clothes, and electronics etc, there are also plenty of restaurants surrounding it to have dinner. I struggled finding anywhere that did anything vegetarian however, so I decided to go back to the island and try some of the gay bars out. I started off at T:ME bar which was a nice little place and had a cool vibe. I asked someone there where else they’d recommend and found myself in FLM, this place reminded me a bit more of somewhere I’d find back home in Manchester. So I googled and found a place over by Lan Kwai Fong, Petticoat Lane is a pretty cool venue and space, I liked the outside terrace area and after enjoying a couple of (pricey) beers I went back over to Causeway Bay and got some yummy veg dim sum and hit the sack. 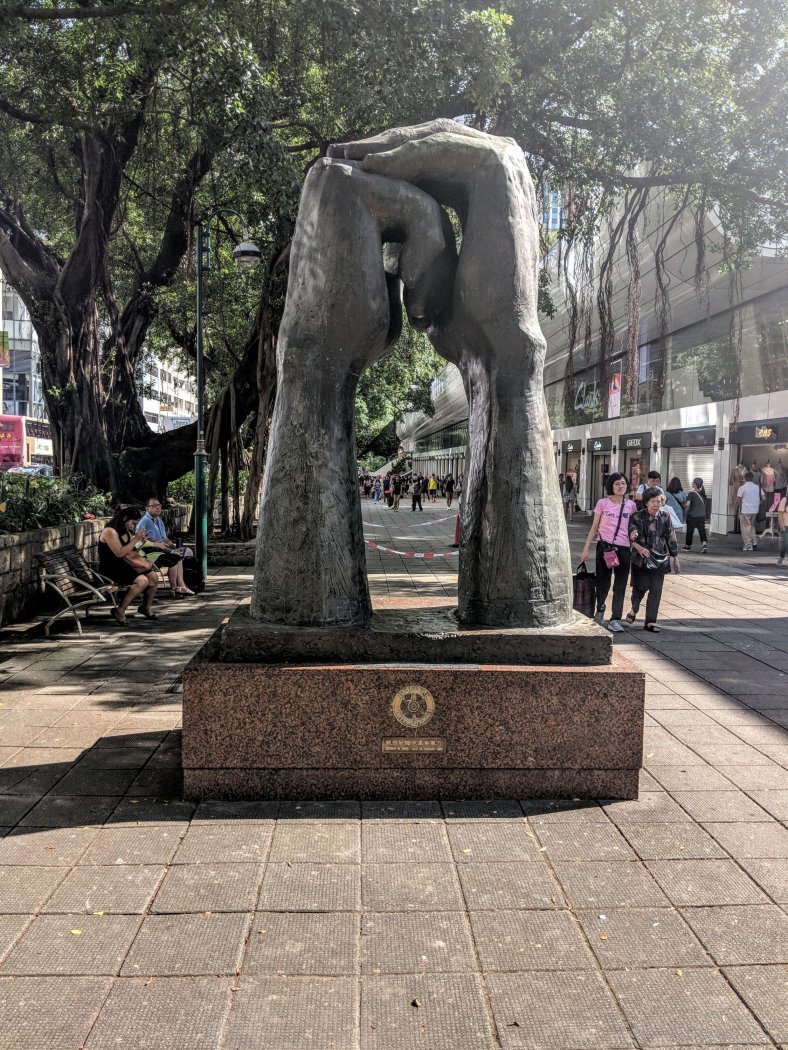 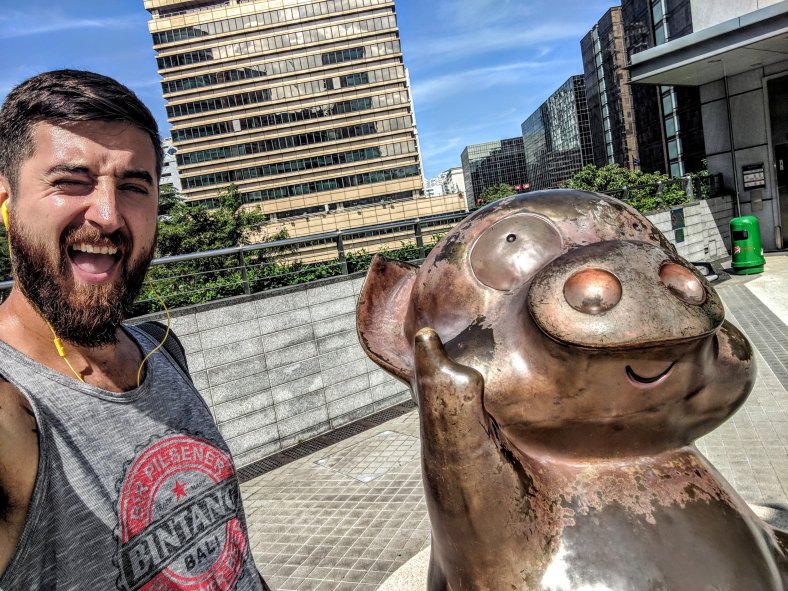 Nothing like a crisp and cold Fat Yak to help you cool down in Brisbane. ✌️🦊 BREW serves great veggie food and a great array of beers. ♻️ . What's your drink of choice? I'll always revert to a nice beer. Cheers! 🍻 or in Welsh, Iechyd Da! 🏴󠁧󠁢󠁷󠁬󠁳󠁿🍺
The beautiful white Hsinbyume Pagoda outside of Mandalay. It's a short but pretty boat road up river leads to several amazing pieces of architecture. It's based on the mystical Sulamani pagoda from Buddhism. 🇲🇲💛 . You can spend a good few hours exploring this area, and there are plenty of photo opportunities for the 'gram ✌️🦊😆
Just over two weeks until we start our adventures again. Heading back over to Melbourne for a month and on to Mexico! ✌️🦊 Just 11 night shifts to go 😆🏥
Nothing like being rewarded with scenic views after a hike through the woods. ✌️🦊 . What can we all do to help the environment?? I've been cutting down on all plastics, been vegetarian for 2 years now and I use public transport. My one vice is flying! What good advice do you have??? Let's share! . Picture by @bokudesu ♥️💜🧡
🦊✌️Introduction Time! ✌️🦊 . I recently realised thanks to @thehackerette that I'm not as social on social media as I thought. So here's a few facts about me! 📝 . My name's Tom, I'm currently 32 and I'm from a small country in the UK called Wales! 🏴󠁧󠁢󠁷󠁬󠁳󠁿 I identify as gay, and I'm proud to support the LGBTQA+ community, and I'm a strong believer in peace and love over hate. 🌈♥️ . I live and work in Manchester, one of the biggest cities in the UK. I work as a nurse, and I love every minute of it. 🇬🇧💂 . In 2017 after travelling around the Balkans for a couple of weeks I decided to quit my regular job and work through an agency. This has allowed me to visit sooooo many countries over the past few years. I love that I can do both things that I love, travel and caring for people. 👨‍⚕️⛑️ . I'm a huge Arsenal FC fan, I love Nintendo, anime and anything Marvel. I currently have 16 tattoos and I'm a bit addicted. ⚽🎮 My partner @bokudesu lives all the way in Australia so we're currently experiencing a very long distance relationship! 🇦🇺🌏 . If you've made it this far, and you want to know more, just ask!! 😁🙈🙌
Did you know Canberra is the capital of Australia??✌️🦊 . If you're visiting, make sure you check out the Anzac parade, this boulevard runs from the man-made Lake Burley Griffin up to the Australian War Memorial museum. 🇦🇺🌈 . Along the parade are memorials to each war that Australia has been involved in, starting with this, The Boer War in South Africa. Australia supplied around 43,000 horses to the war which was mainly fought by mounted infantry. 🌍🐎
Dreaming of sand, sea and sunsets ♥️ . Where's your first 2020 destination?? 📸🌍
GIANT ALERT! 😲✌️ Meet Rambo, the giant merino ram. 🐏🇦🇺 . Fun fact, Australia is full of big things! When taking a road trip, make sure you coordinate your rest stops to take in such beasts as the big avocado, big shrimp, big banana and big koala! 🥑🦐🍌🐨 . It's also more important than ever to visit those places that have been affected by fires and spend your money there. Every little helps in these rural communities. ♥️ . 📸 By @bokudesu
Tell me one thing that you love about your City? ✌️🦊 . One of my favourite things about Melbourne is the Yarra River that runs right through it. It's great for sunny walks along the banks, drinks at one of the many riverside bars or a picnic in the adjacent parks. They really know how to utilise the waterways down under! 🇦🇺🏳️‍🌈😁 . You can even rent a boat out through @goboatmelbourne and enjoy the river on the water. 🥂🥗🍦