So I woke up at 5am and started getting ready, looked outside and it was full on thick cloud. So I went back to bed for a bit and got up for a swim and breakfast at the hotel. No sunrise today!

I walked across the road and rented an electronic scooter, charged and ready to go for 6000 kyat for the full day till 9pm. I was a little worried at first but it was either this, cycle or walk, and I was excited to explore.

Off I sped on the main road through Bagan, and luckily there was hardly any traffic, and the roads are in pretty good shape. I headed up towards Old Bagan and the temples started coming thick and fast. I was given a map and you can download one from a keychain you get when you pay the Bagan archaeological fee.

However I decided to go rogue and try and be a full on explorer. So at some point I turned off down a dirt track towards some of the huge brown pagodas. I stopped off and made sure I remembered to turn the bike off so I wouldn’t run the battery down. I then wandered slowly through the pagodas, each one seemed to have a Buddha inside.

They were beautiful, old and it was a surreal experience finally being here after reading and hearing so much about it. There were pagodas of all sizes just on their own, but also bigger complexes with outer walls and doorways to explore. I definitely felt like Indiana Jones and was sure I would find some ancient treasure.

After taking some fun pics and probably being far too excited about it all I headed down the next dirt track I could see, the paths here are quite small and sandy but I found it pretty easy going. It was only when the sand got a bit deeper that the bike struggled and I learnt to avoid this pretty quickly. 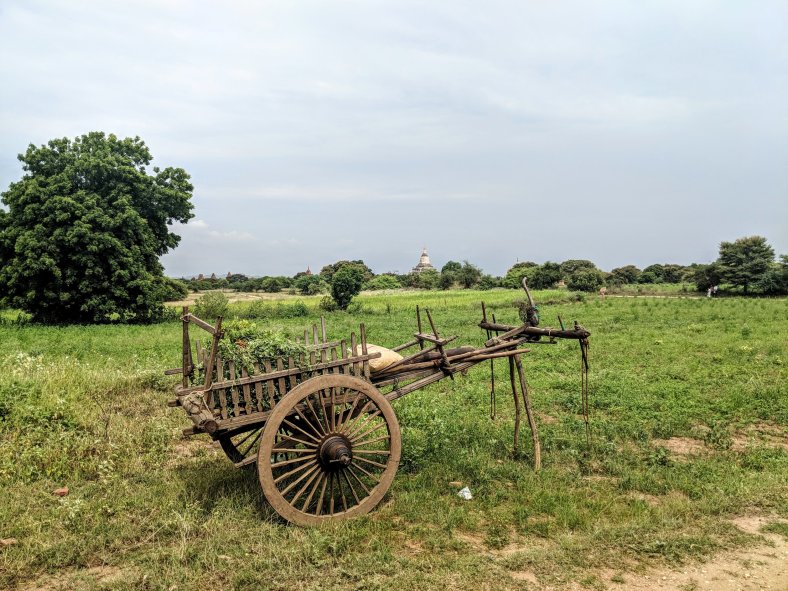 I actually was looking for a pagoda that I could climb up to get some good views, and later there would be some random locals asking if they could take me to some, bit I heard that after the earthquake in …… A lot of the pagoda were shut as it’s too dangerous to climb them.

I continued on, stopping at ones I liked the look of, jumping on and off the bike as I pleased. Then I saw a huge temple near one of the places I had stopped, so I worked out which path seemed to lead there and headed over.

It turned out this was one of the more popular points of interest, called Dhammayan Gyi temple. You could go inside this one and go through huge corridors and small windows taking you in and out of the building. There were even a few shacks outside selling drinks and snacks.

After this I continued my exploration until about 1pm, realised I had been driving around for about 4 and a half hours so decided I would head back to Moon in New Bagan for lunch. This time I had a bright green mint and lime drink, and tried the traditional Myanmar tea leaf salad.

Now this salad is literally one of the tastiest things I have ever tried. Fermented tea leaves, tomatoes, onions, and a load of crunchy beans and nuts all covered in garlic and chilli. I couldn’t believe how good it tasted and I felt bad for the aubergine curry I had next. It still tasted good but nothing like the salad.

After cooling down a bit in the restaurant and chatting to a guy who worked there, I stopped off at a couple more pagoda but it was super hot by this point, so after driving around through Old Bagan and up to ….. I drove straight back to the hotel and chilled out for a couple of hours.

After sunrise had been a miss I was looking forward to the sunset, and went back out on my bike at around 5pm knowing sunset was just after 6pm. The guy in Moon restaurant had given me a couple of tips on where to go but as I drove up the main road out of New Bagan the sky was dark and flashes of lightning were visible on the horizon.

I passed one of the guaranteed spots pretty quickly but wanted to check out the others, this was a big mistake as I then struggled to find them, only managing to find some small banks that you can view the sunset from.

So I quickly headed back to the spot from earlier, just making it about ten minutes before sunset. Although it didn’t really matter as it was again a bit too cloudy for a decent one. It was cool seeing the lightning and rain in the distance, I soon realised it was heading my way and jumped on my bike, getting back just before the heavens opened.

So I ended the night with a drink and swim at the pool as lightning illuminated the night sky above me.

Looking Gorgeous, Feeling Foxy. ✌️🦊
Let's watch the sun set on a past life. ✌️🦊
Happy Pride Month everyone! 🏳️‍🌈❤️🏳️‍🌈 . Even though we can't celebrate any Pride events this year, the fight for equality still goes on. . Part of that fight is to give the BAME community a bigger voice. They don't just have to deal with homophobia, but also with racism, something we are currently witnessing with the black lives matter movement in The U.S. 🙏❤️🧡💛💚💙💜🤎🖤 🙏
Amazing times exploring the Bay of Kotor with these gorgeous girls. 😍🦊✌️
Love is love. ✌️🏳️‍🌈🦊
Just a casual pose for Thursday. 😜✌️🦊
Don't mind me, I'm just chillin' in a tree. ✌️🦊
Is Luxembourg City like, the cutest City in Europe? ✌️🦊
Sunsets ARE my life. ❤️🙏❤️ . I've worked hard to be able to see sunsets in so many different parts of the world. Looking forward to seeing a few more. ✌️🦊