Hello Lisbon! Turning a festival into a holiday.

After spending a fun filled but very muddy weekend at Glastonbury last year, my ‘festival group’ tried and failed to get tickets to this year’s event. Not letting that hold us back, we decided after all the rain last year we’d try something a bit different.

We had heard good things about NOS Alive, based in Lisbon, Portugal and known for great headliners we decided to give it a shot. Seeing as it was in a City that everyone I meet raves about we extended our trip for a full week, with 3 days reserved for festival shenanigans.

It was fun to pack just shorts and t-shirts for a festival after years of British ones and exciting to know we wouldn’t have to lug our camping gear around with us as we were staying in an apartment.

Our flight was from Liverpool so 4 of us drove over from Manchester and got the flight, it’s quite a late arrival into Lisbon so we took an Uber to Alfama, the quirky bohemian district on the edge of the City centre. 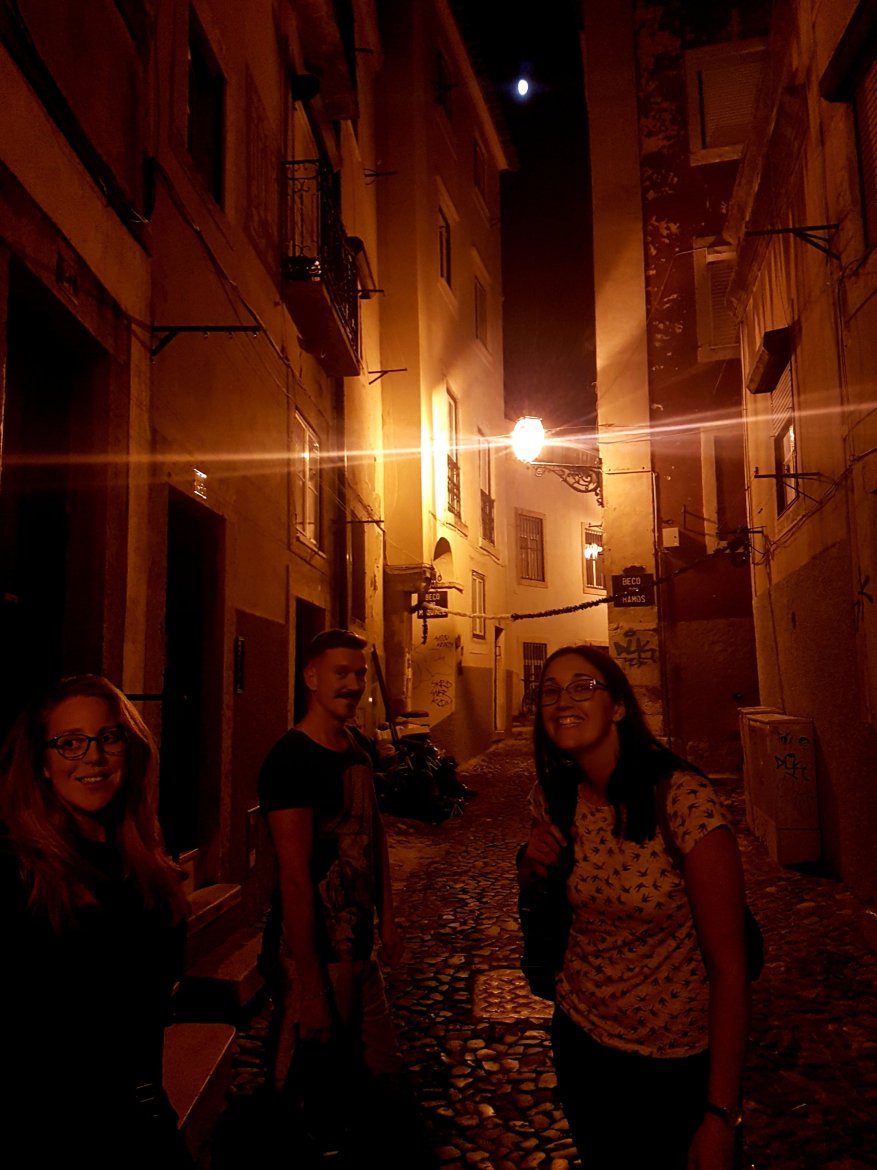 As usual I used booking.com for my hotel needs and a quick call to a guy and we were in! Up the narrowest, steepest stairs ever! The apartment was lovely, quite small but looking out over the cute Alfama streets and rooftops.

We ditched our stuff and went straight out to have a quick explore and obviously find a bar. A few places were shutting before we found one still open, it was fate as there was a mural made up of marvel comics on one wall for Lee and I and elephants on the other for Sarah.

We had a couple of beers and were relaxing when a bunch of middle aged English tourists walked in and started getting rowdy. Slightly ashamed we left and went back to the apartment, my Sister was meeting us the next day at lunch time so we planned to have a bit of a lie in before stocking up for the week.

We headed out and enjoyed getting lost in the small streets with their tiled walls and murals. It’s such a pretty area and filled with atmosphere, we found a supermarket and grabbed breakfast stuff, beer and wine plus some snacks and walked back up to the apartment. The weather was great and we sat in the living area with the windows open and all the sounds and smells of Alfama floating through.

Sarah made breakfast and we all had strong coffee to perk us up while we waited for Hannah who soon arrived outside! The gang all together we chilled out for a bit catching up and then went out to explore properly. 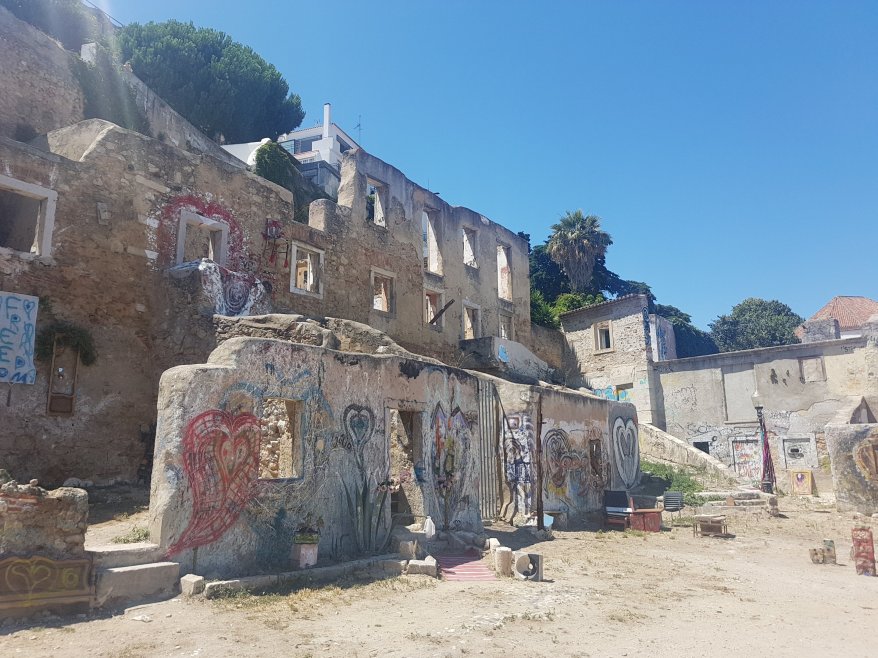 We decided to go up, walk through Alfama and take the famous tram around the City. We passed some amazing looking restaurants and found a cool old rundown building area with a load of art work to look at. 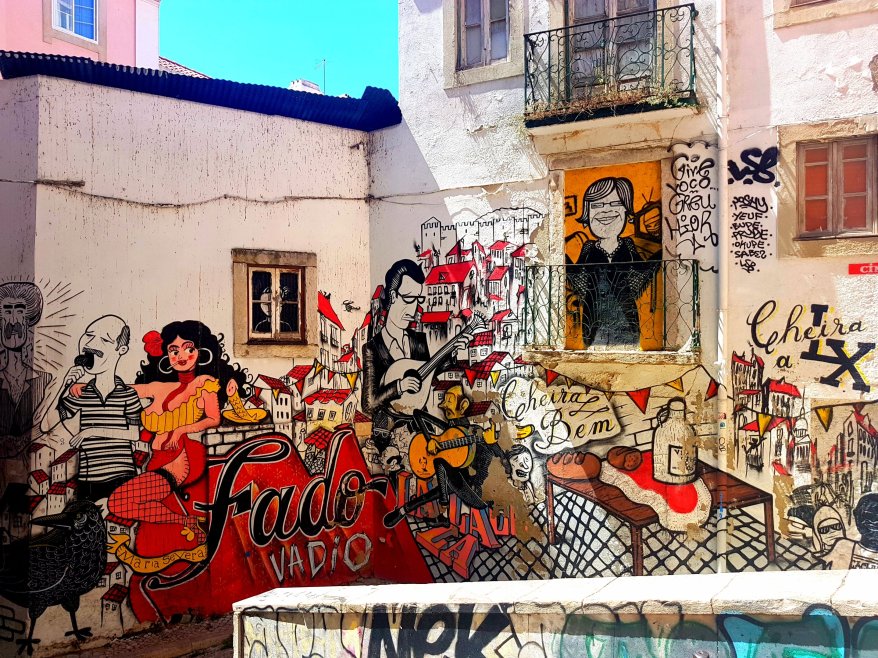 Finding ourselves near St George’s Castle we spotted a bakery selling Nata, small custard filled pastries that Lisbon is famous for. At a euro each we had to try one and some of us got some refreshing homemade lemonade to wash them down with. They were incredibly tasty, the custard lovely and sweet with a burnt caramel taste. It would not be the last one we ate this holiday! 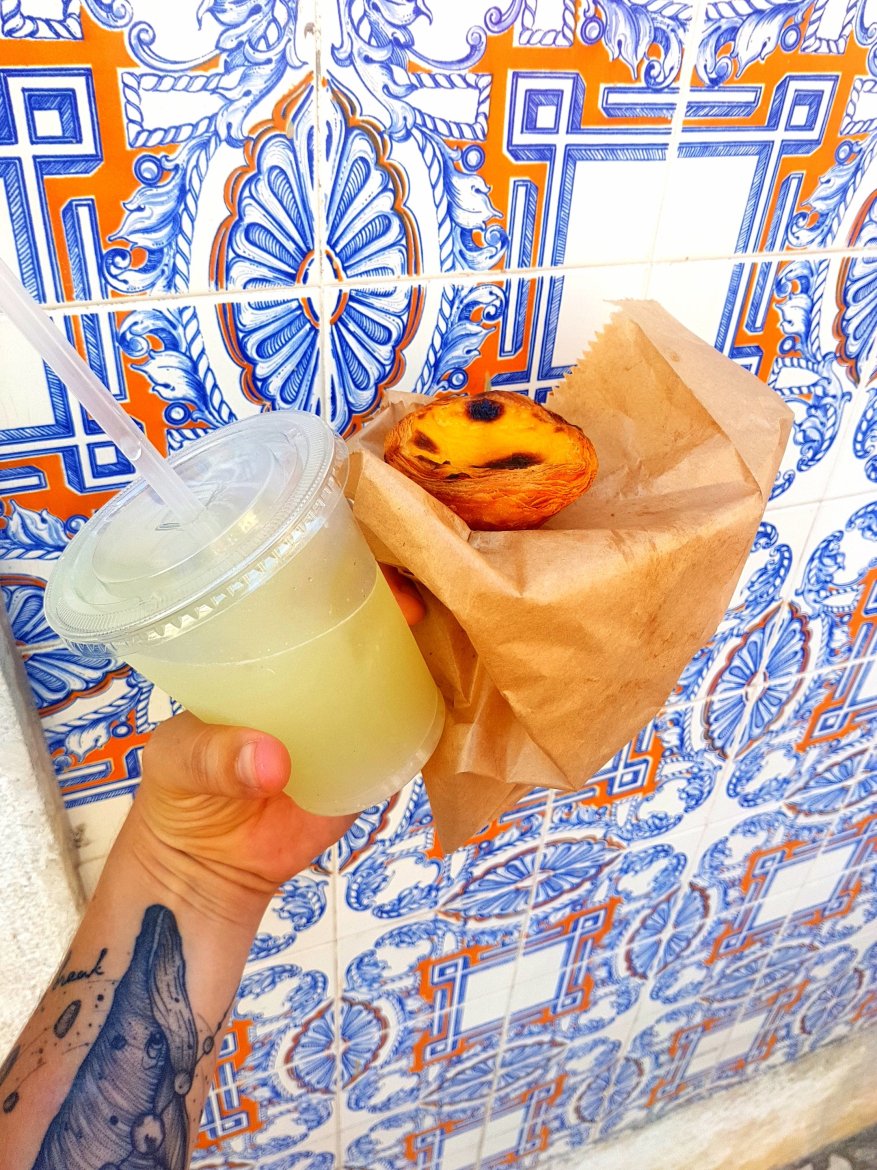 We had reached the top of our journey and now wound down through the streets stopping to check out more great street art. Once we arrived at the square where the trams arrive and depart we thought we would walk around it a bit. The square itself was cool with fountains and statues where we took some fun videos. 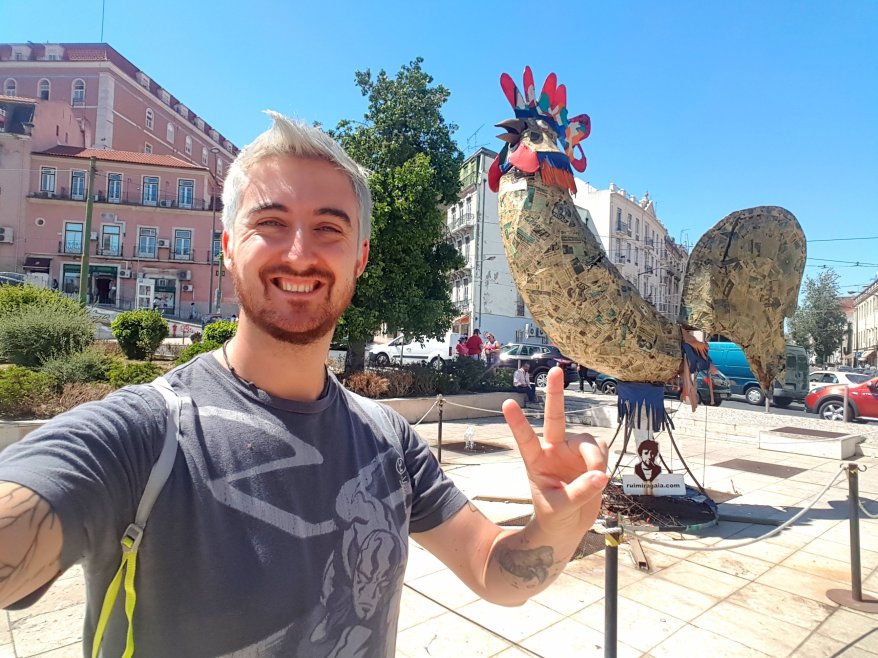 We queued in the heat for the tram with bottles of water to keep hydrated and jumped on and got a seat. I sat on the rught hand side and missed a lot of the sights that the others saw but it was still fun to wind up down and around these cobbled streets where you could touch the walls if you reached out. We passed Se cathedral which we would check out again later in the week and went through the City.

Our journey ended at the huge cemetery across town and we decided to get a drink in a nearby park, we grabbed some food and beers and enjoyed the shade in amongst the green of the park. Refreshed we walked back along the streets we had just passed and stopped to view some of the sights including the Palace of St Benedict and Assembley of the Republic.

I checked to see what points of interest were nearby and noticed a viewpoint that looked interesting on Google maps so we headed in that direction. Emerging onto the terrace we had jaw-dropping views of the river and opposite bank over the terracotta tiled roofs of Lisbon.

It was an incredible place, everyone was chilling out on cubes made of rock, with live music performers and a little bar selling cheap beer! Deciding to stay for a bit we got beers and found a space and sat chatting, listening to the music and enjoying the views. We could even see over to Lisbon’s own Jesus statue, built to commemorate their lack of involvement in WWII.

After a couple more beers we kept walking, finding ourselves on some main streets, we spotted a great tram moment on a steep street coming up towards us with views of the river in the background. 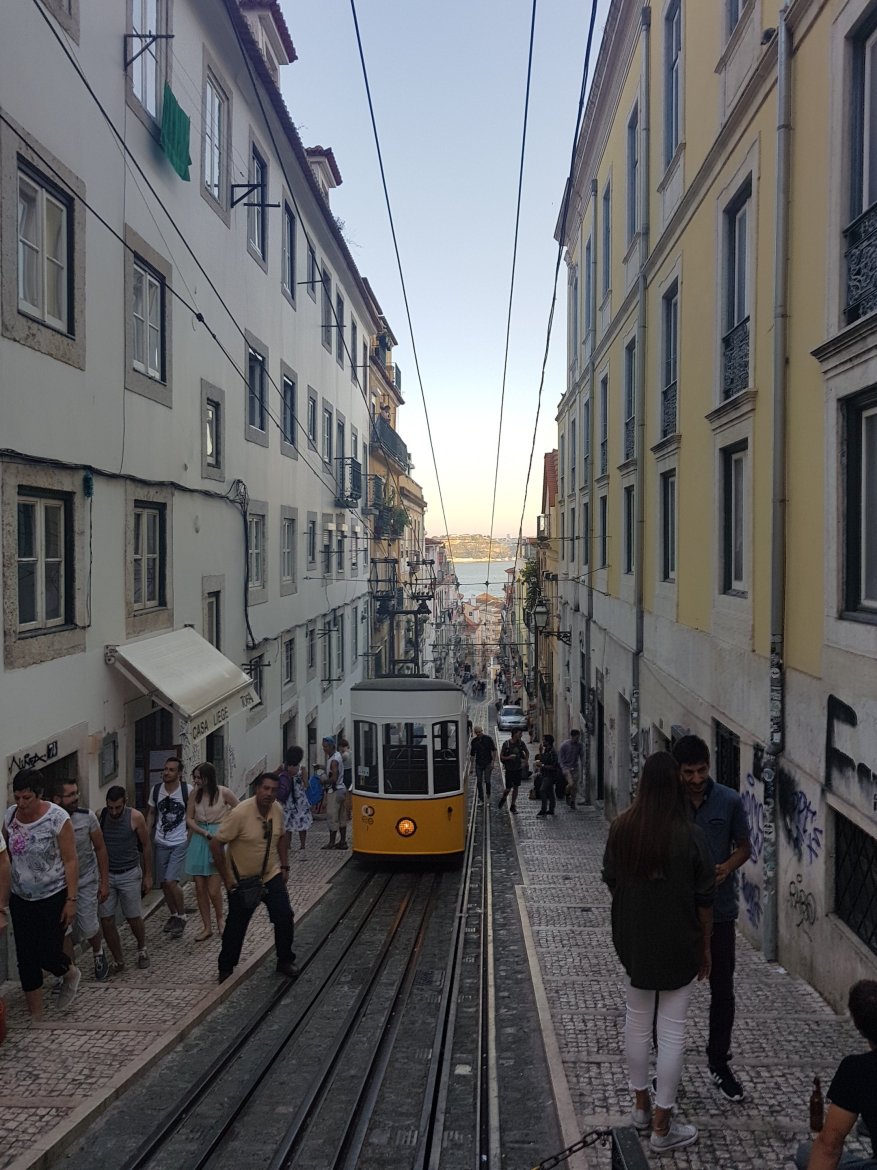 We walked in the general direction of the Santa Justa elevator. A lift that takes you up to a platform with amazing views over the City, we got up to the top and excitedly took pictures and pointed out various sights. 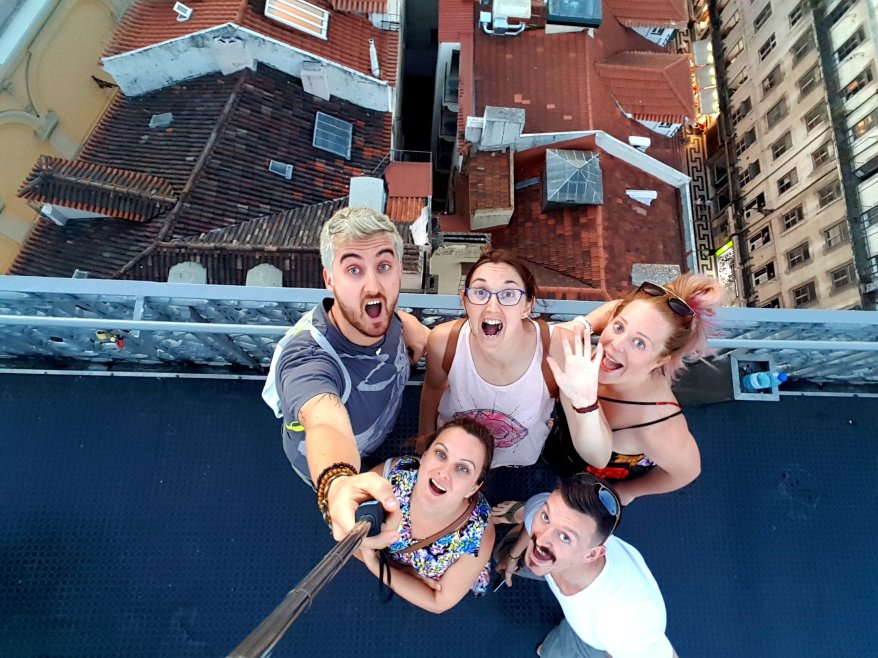 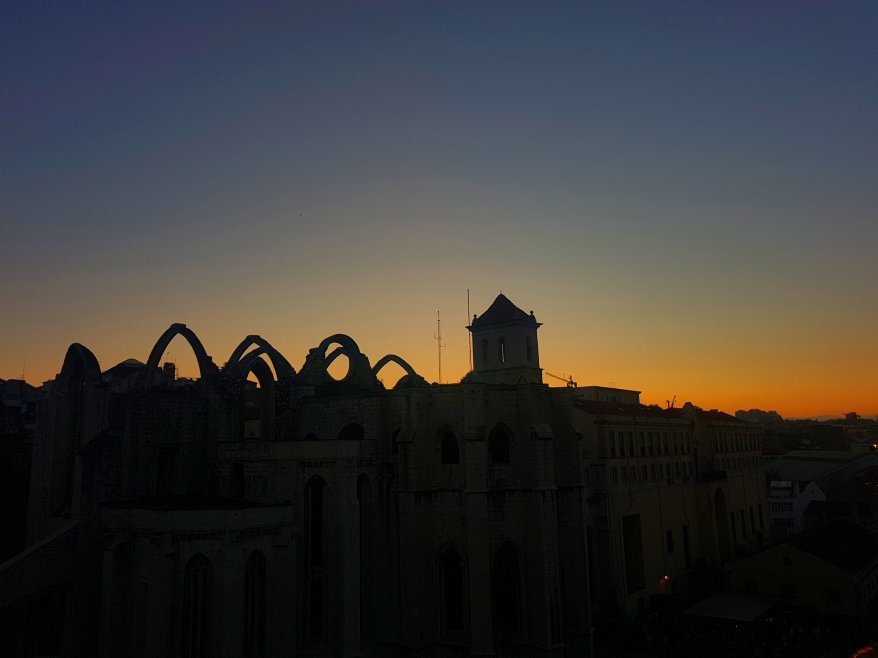 We noticed a cool looking bar down below set in the grounds of a cathedral that was half destroyed in an earthquake in 1755. We walked down to it and got some drinks, there was a brass band going around playing, and a really nice vibe in the place. 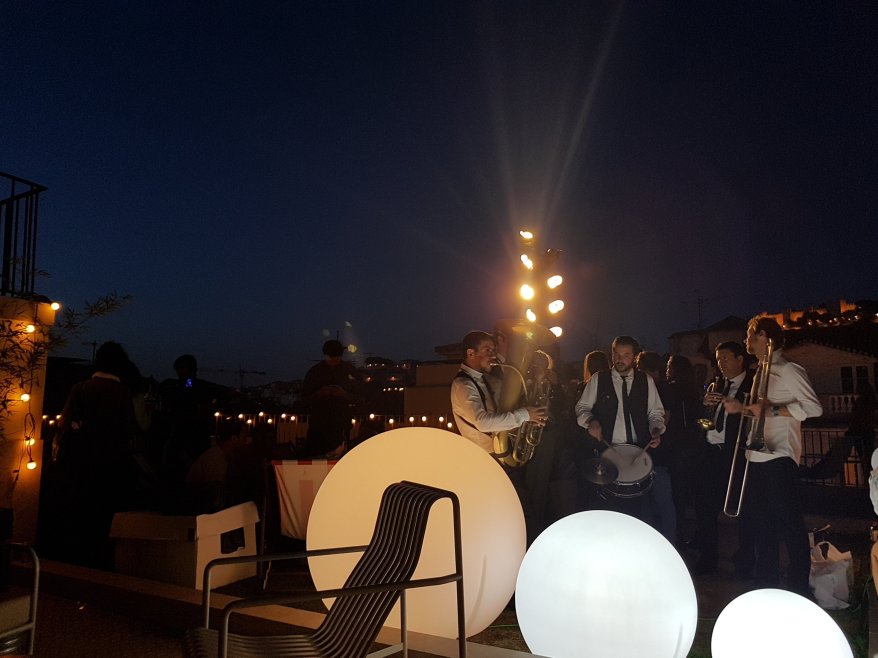 Everyone was starving now so even though we kinda wanted to stay we knew we needed food so we walked over to an underground and took the train back over to Alfama. Once we were back in the district we tried to find somewhere nice to eat but everywhere seemed closed so we lumped for the one place that wasn’t.

We sat there and realised it was quite a touristy place and expensive for the type of food it served but we were too hungry to care. The food was just okay but it turned out we got our own Fado performance, Fado is Portuguese music that is full of sorrow and emotion and even though it was a bit weird having this lady perform just for us it was really gripping and enjoyable.

With food finished we were tired and it was late, plus we were up early to visit Sintra the next day, an area out of Lisbon that looked and sounded spectacular. So we headed to the apartment and had a couple of drinks, a bit of heads up and then bed.