I was up and about early, walking back to Beziers train station. It was hot even at 8am and I knew I was in for another scorcher. I had pre-booked my ticket online for 14Euro for first class! It was only 50cent or so extra so thought I’d splash out. 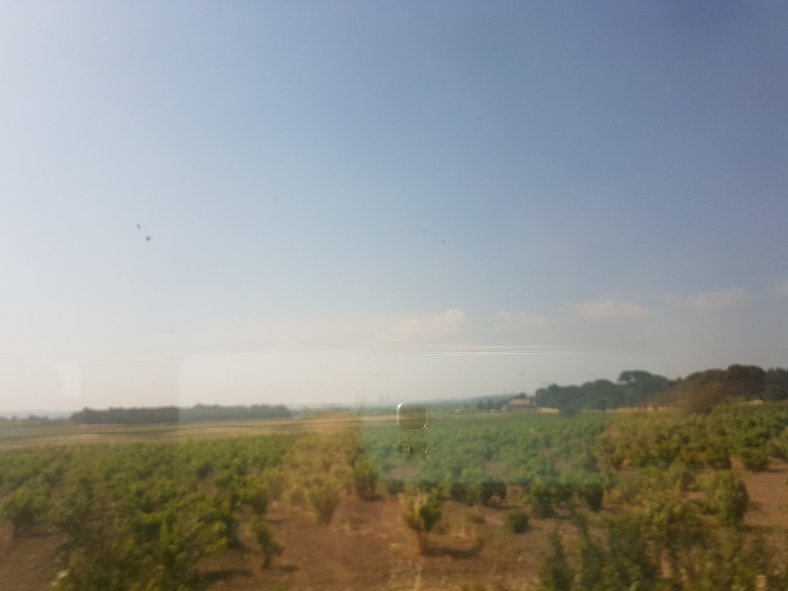 The train was only marginally delayed and I was soon on my way, watching the French countryside roll past as we trundled along. We soon arrived in Carcassone and I checked my maps before heading in the general direction of the famous citadel.

Passing over the canal du midi again, along a leafy boulevard, and over a lovely square. I hit a bridge over the river. From here I got my first glimpse of my destination. I was super excited to explore it, but first I had to drop my main bag off at a hotel.

I was using Nannybag for the first time and it was so useful, you can leave your bag at a participating hotel for around 5E and it was really easy.

Now I was free from the shackles of my bag I went straight up the hill to Carcassone citadel. Marvelling at the towers with their bright blue conical roofs. It started as a Gaulish settlement in the 3rd century before the Romans decided to fortify it.

Now it’s half winding alleyways half tourist filled restaurants and shops. The best tip I can give is to buy your tickets to walk the walls from the tourist office, there’s no queue here compared to the regular ticket office in the grounds of the main castle.

My first stop in the citadel was the church, there were monks singing inside which really added to the atmosphere. I left feeling very calmed, and began to explore all the winding streets. I walked around the perimeter and found a cute little garden area beneath the bridge into the main castle. 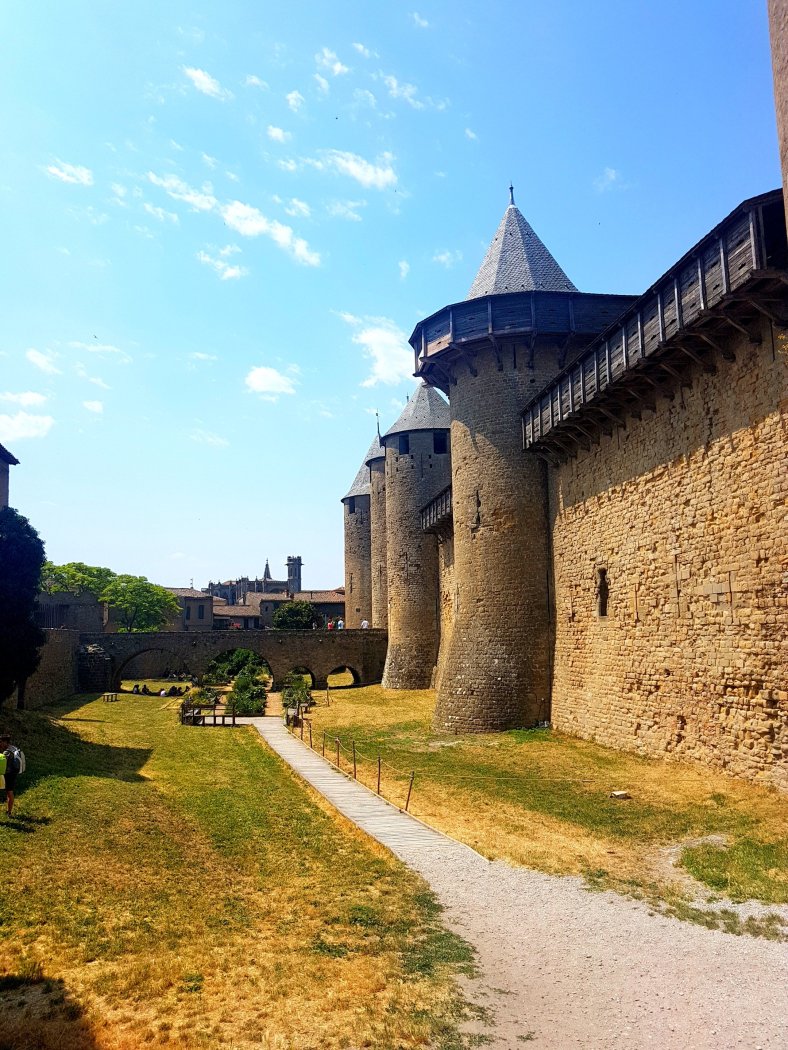 I was excited to get up high onto the walls so passed through the barriers and went straight up to my left onto the walls. The views over the City and countryside were excellent and the wind was a nice cooldown from the 35°c heat. I passed through towers and looked down into the citadel, gaining a different perspective of the place. 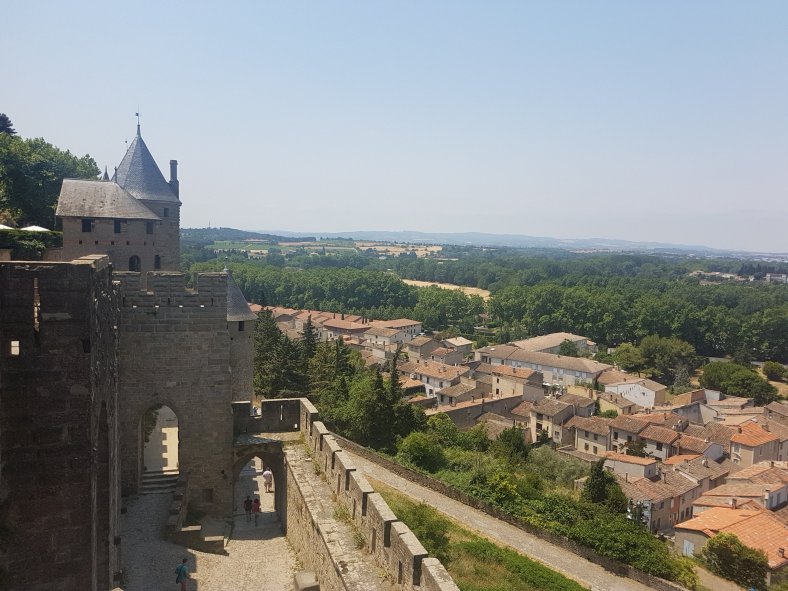 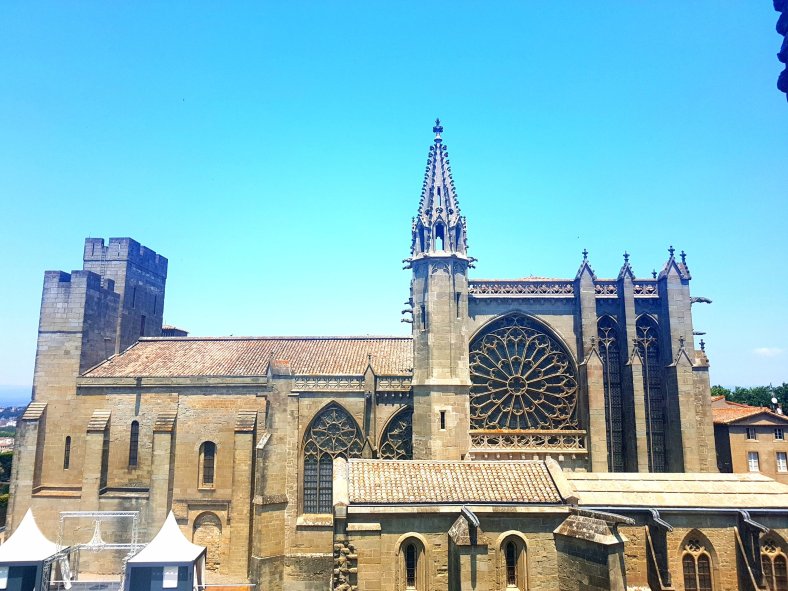 After a couple of hours wandering round the Citadel I decided to go into the City and possibly walk along the canal again. I walked back down the hill and crossed over the river on a pedestrian bridge. I checked google maps for the little brown circles that indicate places of interest and headed up the Boulevard Barbes.

It was a lovely tree lined pedestrian street with fountains, the portail des jacobins, a gateway inro the old city, and the Sant Michel cathedral. 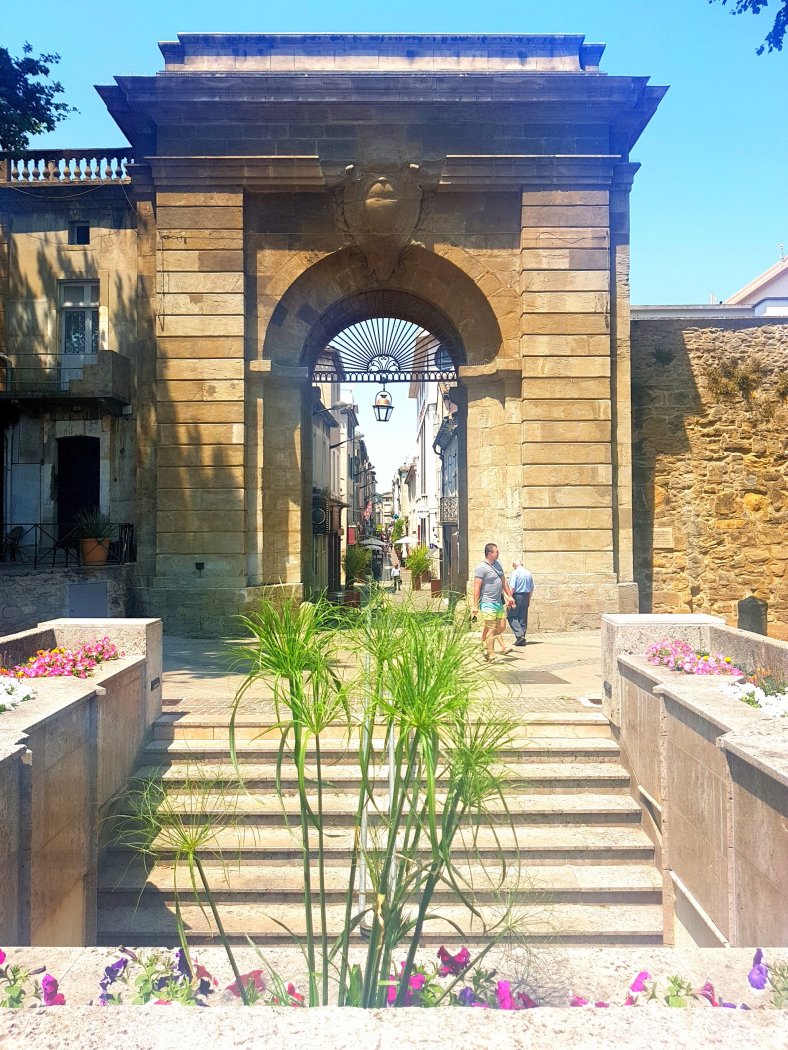 I could see a green space on the map at the end of the Boulevard so I decided to continue walking towards it. As I got closer I saw that it was a walled garden of some sort. Walking around the walls I found the gateway and walked in to quite a creepy old garden.

It was pretty cool, with an old abandoned church under a load of dirt and rocks and a big Jesus statue located right at the top. 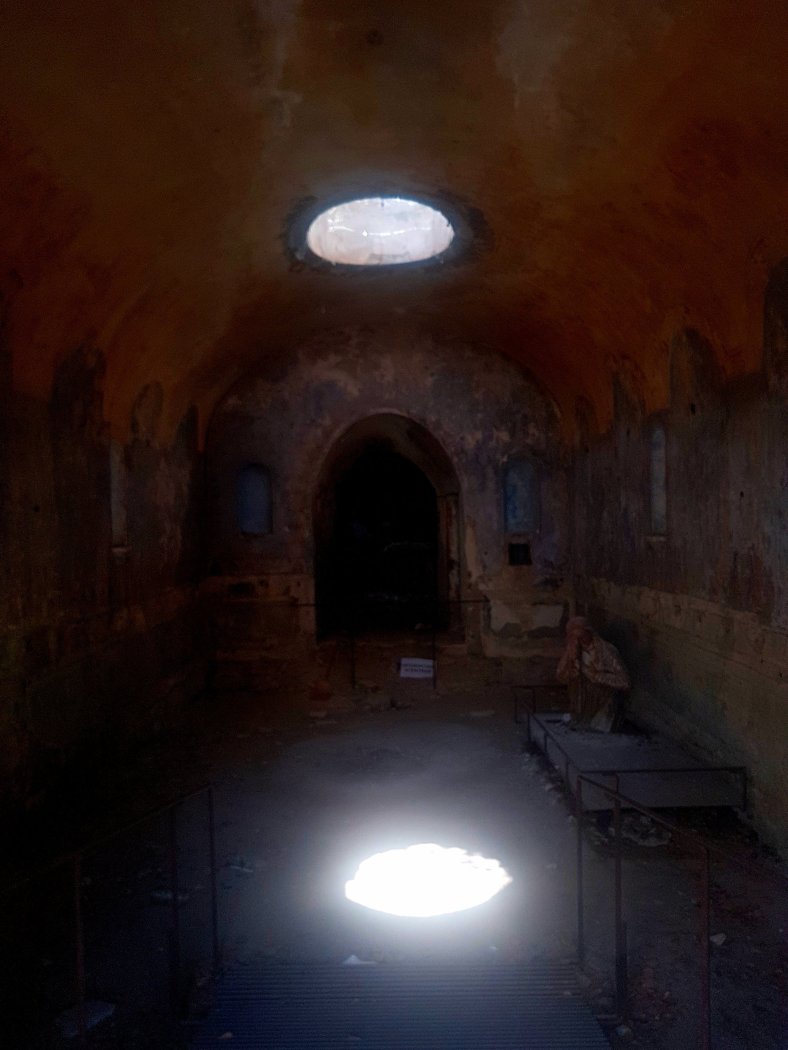 I love little finds like this, wandering around discovering things that aren’t the stereotypical sights. I passed through the town which has some nice streets, and headed up the canal again. Big boats cruised past and cyclists/joggers/dog walkers passed me by as I took in the beautiful scenery. 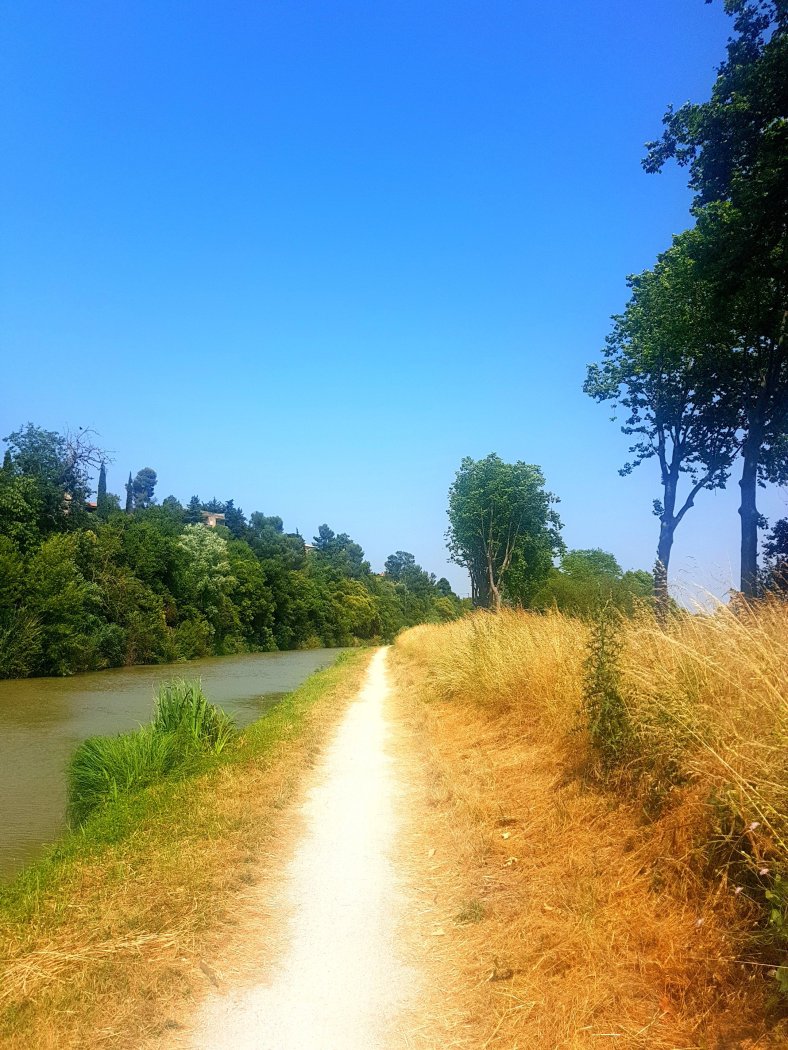 My plan was to walk up until the canal came close to the river, and walk back down towards the Citadel to pick my bag up. After missing the turning off for the river I finally made it and enjoyed the leisurely walk in the sunshine back up to the hotel through gardens and parks. 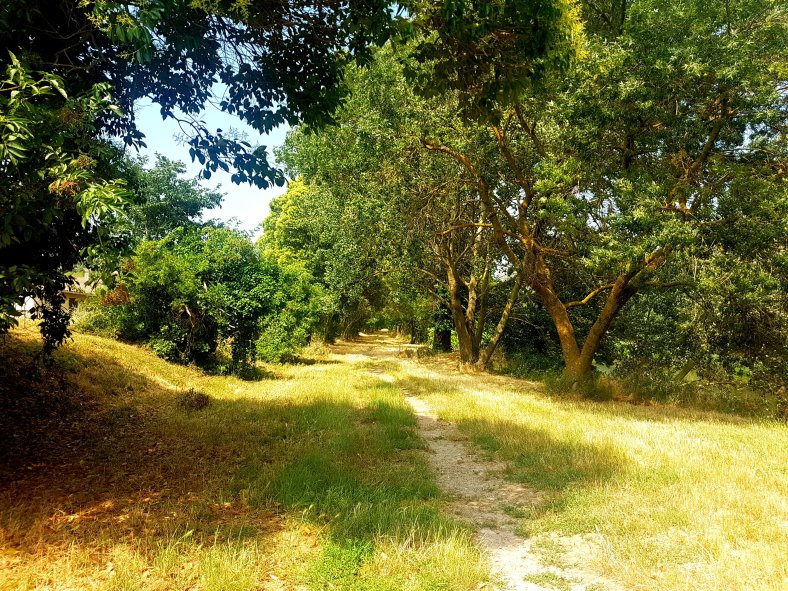 I picked my bag up and said goodbye to Carcassone, an absolutely beautiful place which definitely lived up to it’s hype. The citadel alone is worth it! 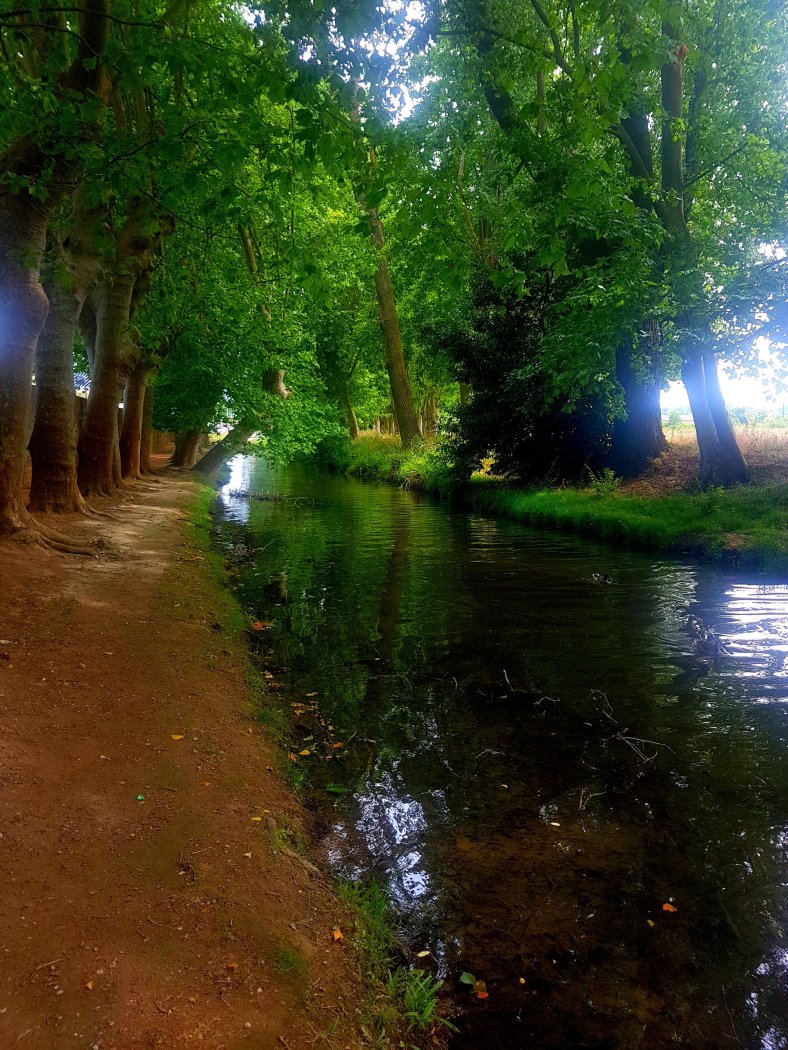 My next destination was Toulouse, the trendy student City near the Pyrenees mountains and the Spanish border. I had only really decided to stay here for the onward journey to Andorra but after doing some research I was looking forward to it.
I was staying in a hostel near the river and one of the main sights in Toulouse, the Basilica of saint-sernin. I arrived late on and after checking into my shared room I decided to head straight to the river and see what was going on. I couldn’t believe how busy it was when I got there, teeming with people sat eating, drinking, and laughing everywhere along the riverbank.

Seeing everyone having fun in the warm evening made me a bit sad that I didn’t have anyone with me to enjoy it, the one time solo travel really bothered me on this trip.

I sat in a gap between some groups and watched a gorgeous sunset over the river. At this point I was starving so once the sun was down I went in search of food, I was craving something unhealthy and cheap and found the perfect thing…kebab and chips! 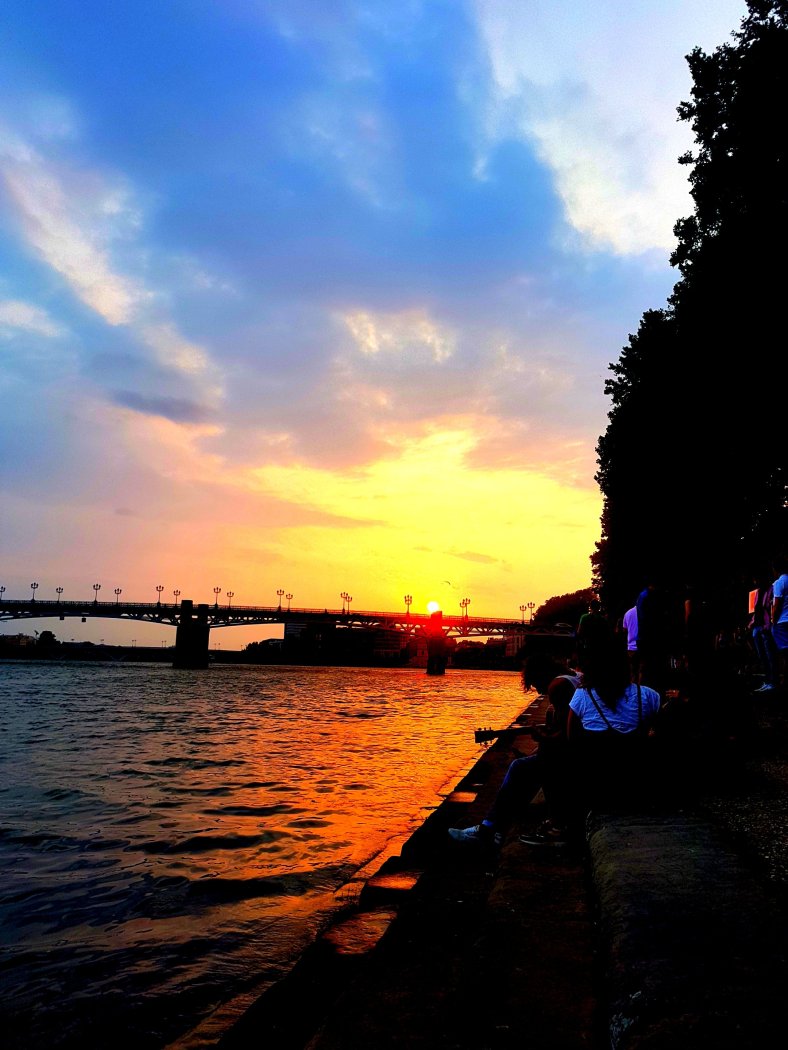 I was ready for bed after a lot of walking about, and when I got back there was nobody in the room, so I got in bed and slowly dozed off. I had a full day to explore Toulouse and wanted to make the most of it.

One thought on “Cracking on in Carcassone”

Which City would you go back to time and again?✌️🦊 . The classic red telephone box in London. A City I've visited so many times and yet I feel like I've barely explored half of it. 💂🇬🇧 . It's also a great queer destination, with the classic Soho area full of queer bars and shops and the more alternative Vauxhall just across the Thames🏳️‍🌈♥️💜💛
Nothing like a crisp and cold Fat Yak to help you cool down in Brisbane. ✌️🦊 BREW serves great veggie food and a great array of beers. ♻️ . What's your drink of choice? I'll always revert to a nice beer. Cheers! 🍻 or in Welsh, Iechyd Da! 🏴󠁧󠁢󠁷󠁬󠁳󠁿🍺
The beautiful white Hsinbyume Pagoda outside of Mandalay. It's a short but pretty boat road up river leads to several amazing pieces of architecture. It's based on the mystical Sulamani pagoda from Buddhism. 🇲🇲💛 . You can spend a good few hours exploring this area, and there are plenty of photo opportunities for the 'gram ✌️🦊😆
Just over two weeks until we start our adventures again. Heading back over to Melbourne for a month and on to Mexico! ✌️🦊 Just 11 night shifts to go 😆🏥
Nothing like being rewarded with scenic views after a hike through the woods. ✌️🦊 . What can we all do to help the environment?? I've been cutting down on all plastics, been vegetarian for 2 years now and I use public transport. My one vice is flying! What good advice do you have??? Let's share! . Picture by @bokudesu ♥️💜🧡
🦊✌️Introduction Time! ✌️🦊 . I recently realised thanks to @thehackerette that I'm not as social on social media as I thought. So here's a few facts about me! 📝 . My name's Tom, I'm currently 32 and I'm from a small country in the UK called Wales! 🏴󠁧󠁢󠁷󠁬󠁳󠁿 I identify as gay, and I'm proud to support the LGBTQA+ community, and I'm a strong believer in peace and love over hate. 🌈♥️ . I live and work in Manchester, one of the biggest cities in the UK. I work as a nurse, and I love every minute of it. 🇬🇧💂 . In 2017 after travelling around the Balkans for a couple of weeks I decided to quit my regular job and work through an agency. This has allowed me to visit sooooo many countries over the past few years. I love that I can do both things that I love, travel and caring for people. 👨‍⚕️⛑️ . I'm a huge Arsenal FC fan, I love Nintendo, anime and anything Marvel. I currently have 16 tattoos and I'm a bit addicted. ⚽🎮 My partner @bokudesu lives all the way in Australia so we're currently experiencing a very long distance relationship! 🇦🇺🌏 . If you've made it this far, and you want to know more, just ask!! 😁🙈🙌
Did you know Canberra is the capital of Australia??✌️🦊 . If you're visiting, make sure you check out the Anzac parade, this boulevard runs from the man-made Lake Burley Griffin up to the Australian War Memorial museum. 🇦🇺🌈 . Along the parade are memorials to each war that Australia has been involved in, starting with this, The Boer War in South Africa. Australia supplied around 43,000 horses to the war which was mainly fought by mounted infantry. 🌍🐎
Dreaming of sand, sea and sunsets ♥️ . Where's your first 2020 destination?? 📸🌍
GIANT ALERT! 😲✌️ Meet Rambo, the giant merino ram. 🐏🇦🇺 . Fun fact, Australia is full of big things! When taking a road trip, make sure you coordinate your rest stops to take in such beasts as the big avocado, big shrimp, big banana and big koala! 🥑🦐🍌🐨 . It's also more important than ever to visit those places that have been affected by fires and spend your money there. Every little helps in these rural communities. ♥️ . 📸 By @bokudesu