Today was the day I had really been looking forward to, exploring ancient Rome. Caesars, gladiators, opulence, political intrigue, the Romans had it all, including achieving amazing architectural feats and having a civilisation that was more advanced than anything for the next few hundred years after it’s demise in Europe.

Our first stop was the Colosseum one of the must see sights of Rome, our plan was to get up early (check) and walk over to the Colosseum via the Circo Maximo. Free to see as there’s not much left of it, here was where the great chariot races and other games were held. It’s thought it could accommodate over 150,000 spectators which would make it one of the biggest arenas even today.

You can only really see the basic outline of it these days which is a shame.

Just up from here though was the main event, as we turned a corner we spotted it and the excitement grew. Our Omnia Pass got us in for free and queue jump which we took full advantage of, although we stopped to take a few pictures from outside first. There’s a cool arch nearby too.

As we entered we climbed the steps up before emerging out into the spectators area looking out over the arena where gladiator battles, exotic animal hunts, executions and even sea battles took place. You could almost hear the roar of the crowd! We did a full lap of the stands, reading information on the history of the place from signs and our lonely planet guide. 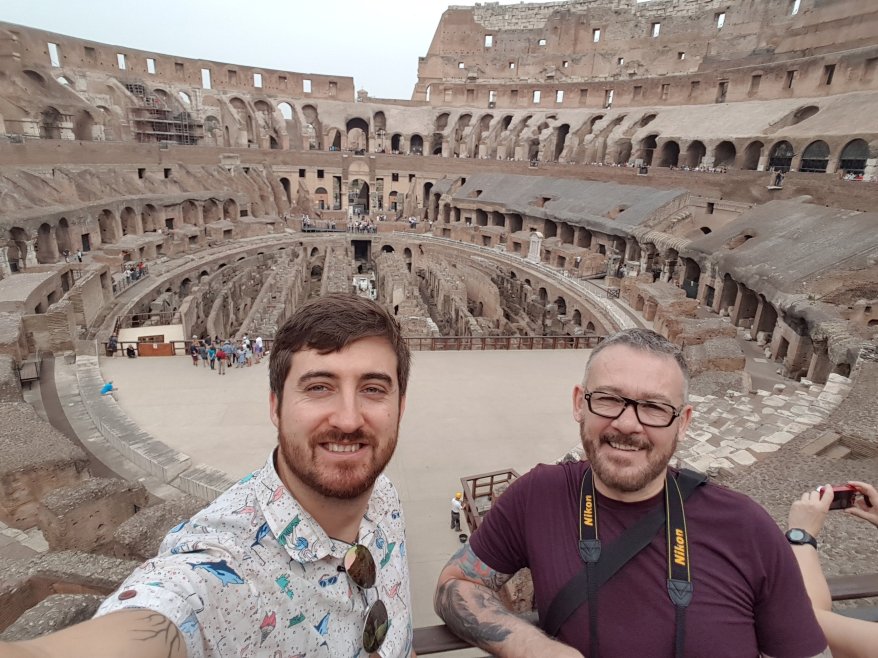 Once we had walked round the ground level, we were ready to leave.  I loved the Colosseum it’s such an amazing thing to see!

We walked up a nearby road to get some more good views of the Colosseum then grabbed an ice cold drink and chilled out for a bit before we hit the next historical site, the Roman Forum. The political centre of Roman times, there are an abundance of archaeological sites peppered all over a small area.

We wandered past huge columns and remnants of grand buildings including the Senate and the temple of saturn, used as the state treasury. It’s crazy how the Romans built all this while the rest of Europe We’re living in huts. The place where Julius Caesar himself was buried is here. 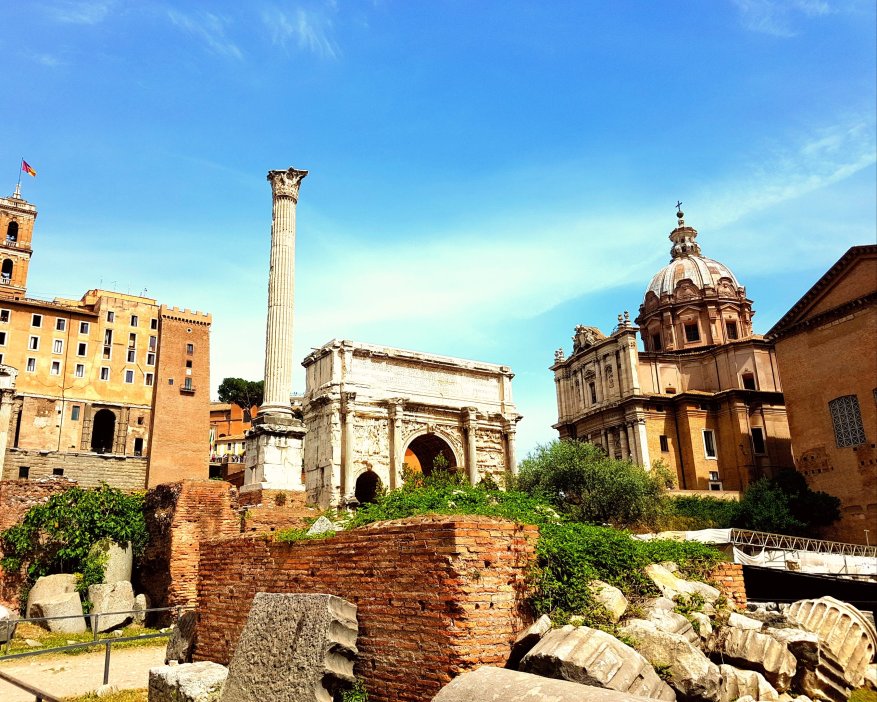 We found the temple of the vestal virgins where 6 girls were chosen to keep Vesta’s sacred flame alight at all times. This was the symbolic ‘Emperor’s fire’ where anyome could take fire from for household use.

From here we passed through the arch of Titus depicting the spoils from the sacking of Jerusalem and up into Palatine hill. This next area is included with the Roman Forum and is one of the most ancient sites in Rome.

Sitting atop the hill that Romulus and Remus, the legendary founders of Rome who were nursed by a wolf, Palatine hill dates back thousands of years. 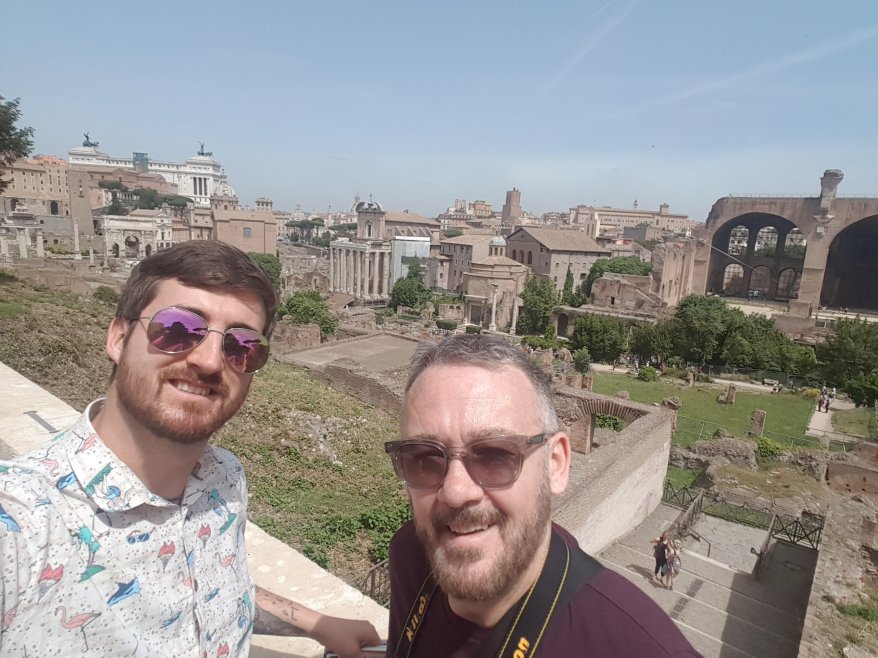 Up here were great views of the Forum and the Circus Maximus, the palace of Augustus and his own private sports arena! It’s lovely up there with gardens and fields surrounded by ground zero buildings of the Roman Empire.  We spent a while walking around here before exiting near the Colosseum. 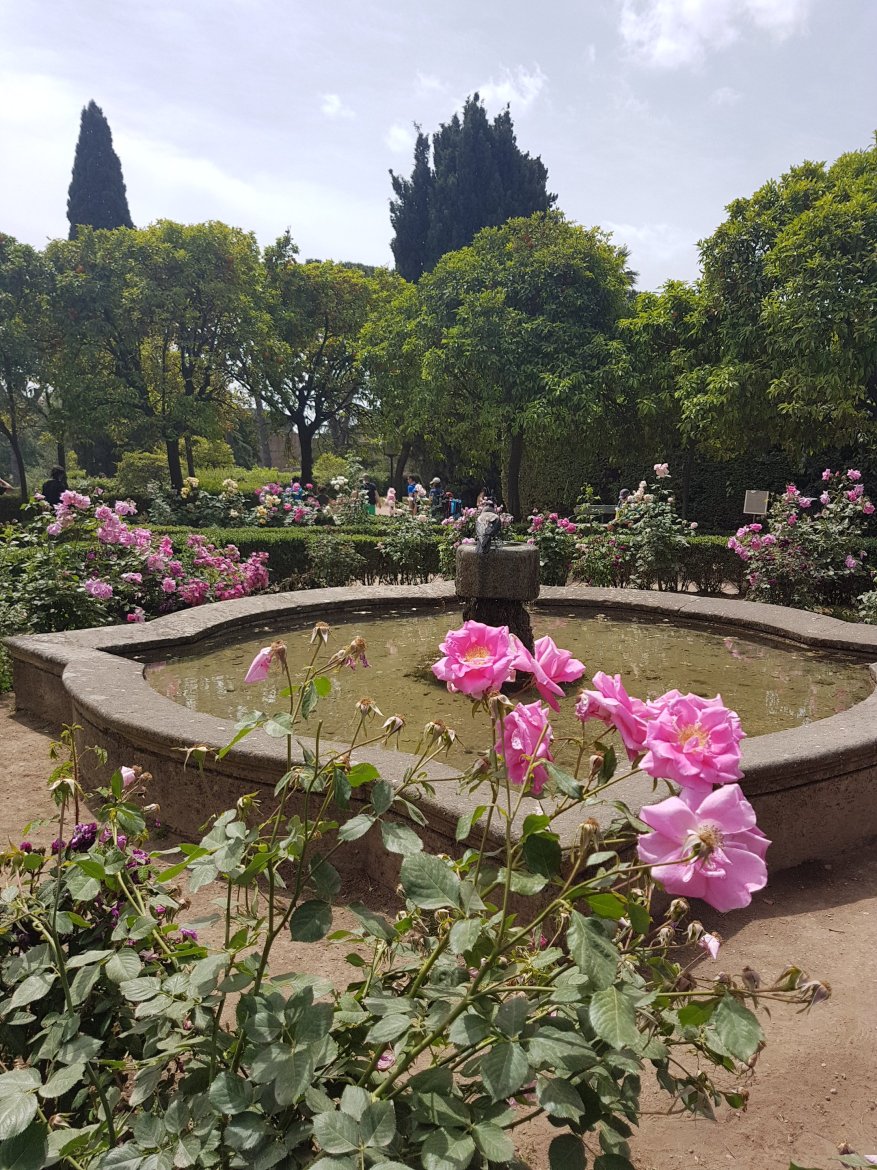 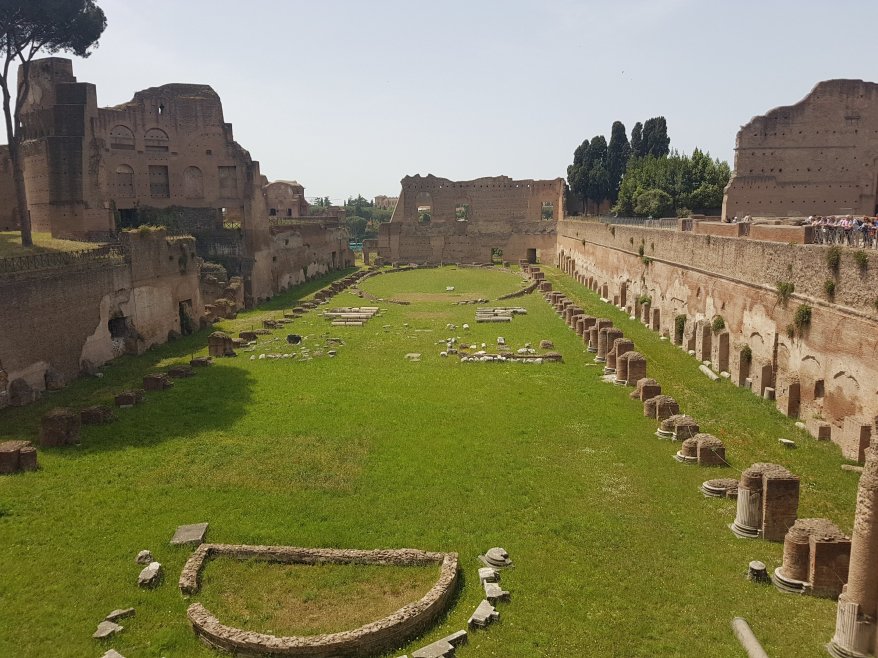 I had read about a place in the historic quarter that did great sandwiches, so we walked through Rome enjoying the general sights, sounds and smells of the City. We found baguetteria del fico and were welcomed in by a very friendly Italian. It was a cool little place and even better when the chef was freshly slicing the meat for the sandwiches.  They were tasty but the bread was very crunchy!

Refueled it was time to tackle St Peter’s Basilica, so we walked over, spent 10 minutes figuring out the entrance, breezed past the crowds thanks to the omnia card and entered. To give you some background, St Peter’s was finished in 1626, around 100 years after building began.  It’s the largest church in the world, and thought to be built over the burial site of St Peter, the original pope. 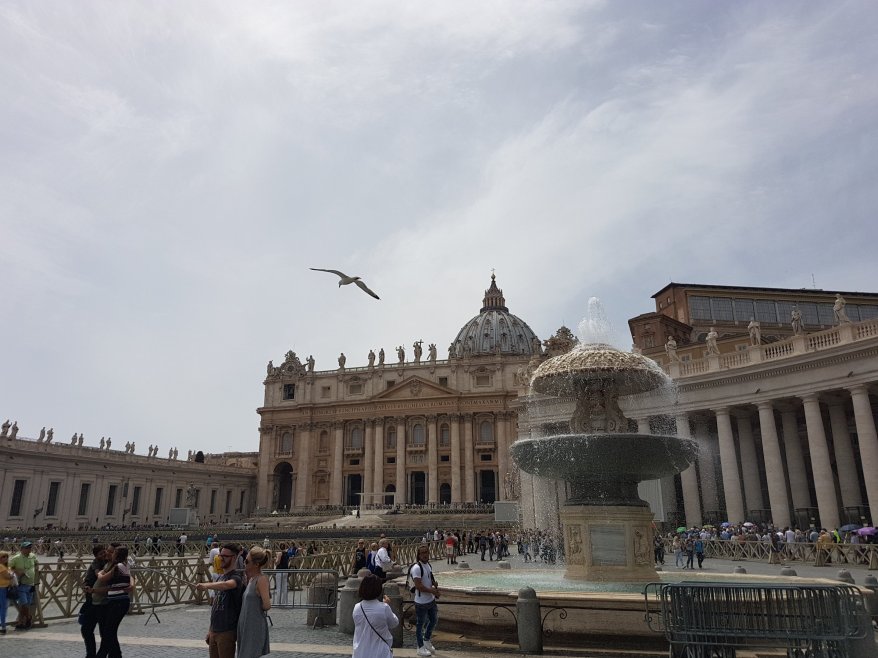 The splendour of the place is crazy as you walk in under the balcony where the pope delivers his blessing at Christmas and Easter. When you walk in to the right is Pieta, sculpted by Michelangelo when he was 25. The only work he actually signed. From here you see the monument to Queen Christina of Sweden, who had a lot of gossip follow her about regarding dalliances with members of both sexes.

There’s a tomb holding Pope John Paul II, Bernini’s 29m high baldachin, a ceremonial canopy sitting over the papal altar and above this is Michelangelo’s done at 119m high! You can enter the Vatican grottoes from here for free and visit the tomb of St Peter himself for an extra 13E.

We decided to go up instead, 7E to head to the top of the Dome, arriving at the base of the Dome we had views down into the church before ascending up steep and narrow spiral staircases to emerge looking out onto St Peter’s Square. The views are definitely worth the cost and the climb up. A 360 degree lookout point for the whole of Rome.

We spent around 10-15 minutes here before walking back down, stopping briefly on one of the rooftops of the church. Now we headed back to the apartment to rest before going out.

My Italian friend had suggested we try the Trastevere area of Rome to eat. So we crossed over the river, Trastevere means ‘beyond the river’ and we loved this area, there were people everywhere sat chatting, drinking, eating and enjoying the warm evening.

We stopped at a busy restaurant and ordered some wine and bruschetta, which was lovely. Our pasta mains weren’t great though, they tasted like something you’d get in a chain Italian back in the UK. This was a shame but undeterred we wandered around the small streets filled with bars and restaurants, finding piazzas with throngs of people having fun.

It’s a nice vibe in the area and we stopped for a couple of drinks to people watch and enjoy the last of the evening. Tomorrow we were up early again to visit the old Roman road and catacombs. 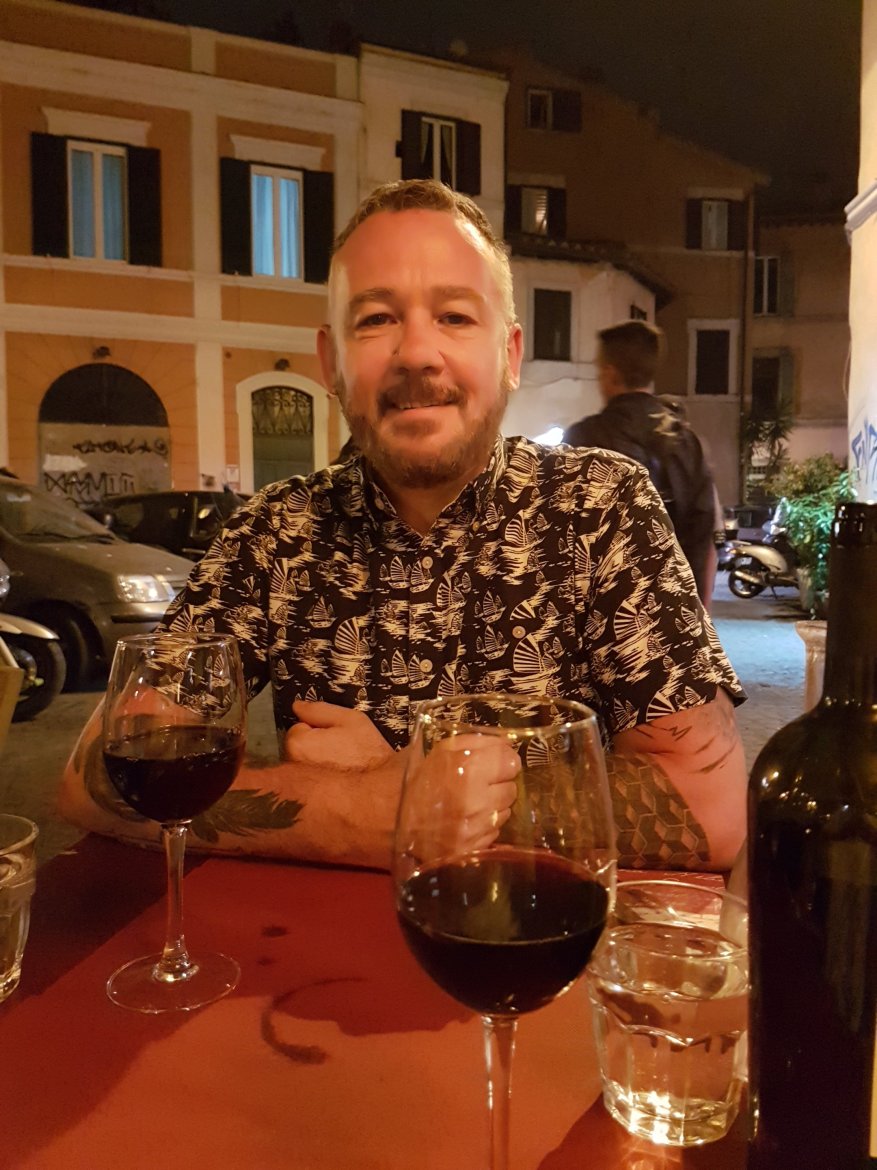