Today was adventure day, we had our lunch packed, poor clothing choices for the weather, a car and a vague idea of a route. This is basically all you need to take advantage of the Icelandic wilderness in Springtime.

Our first port of call was the famed golden circle, a collection of sights that can be found on a ring road just out of Reykjavik. We left around 8am heading Northeast from the City…the road soon climbing up into the mountains we were surrounded by an icy landscape of frozen lakes and whiteness in every direction. It was very beautiful and I hardly remember any houses along this point.

Our first stop was Pingvellir, an old Viking settlement where all the clans met in spring to discuss business, trade and laws. It’s also where the European and American tectonic plates meet. We walked out to the view point, where you can see a big lake and surrounding scenery. Unfortunately the weather had taken a turn for the worse, with wind and rain battering us in our semi-waterproof coats, soaking our jeans and scarves to the skin. Much of the view was obscured by cloud and fog but what we could see was cool.

We walked down some steps, noting where a huge hole had opened up on the old path underneath the raised platform we were now on, and descended between the plates. This was an amazing moment and even with the rain we loved the feeling of being stood between these huge continents, this is why people come to Iceland. We wandered along looking at the rock formations and the old Viking ruins. It’s crazy to think they made the journey here by boat, this small island in the middle of the ocean. 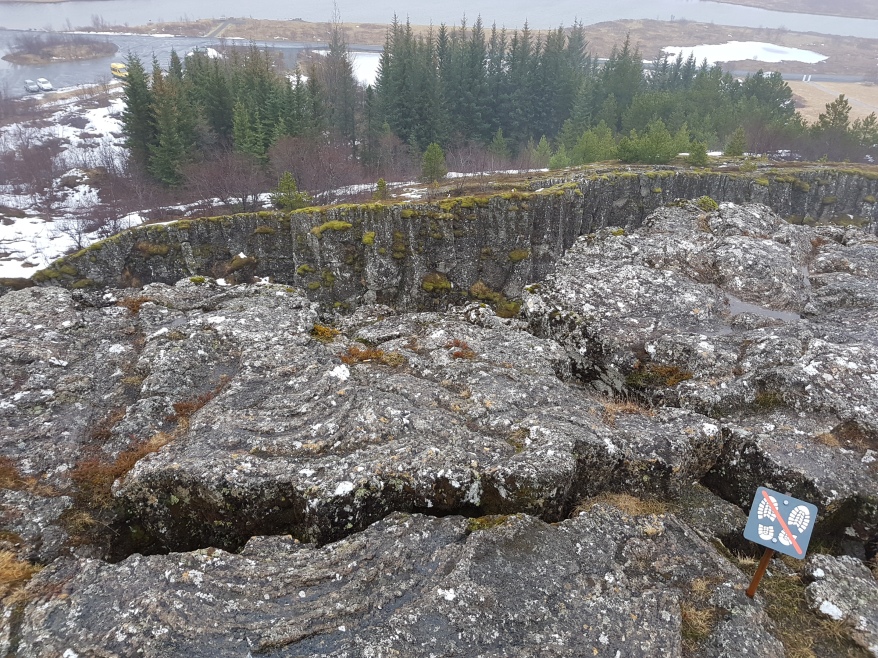 The end of the path for us was a raging rocky waterfall, gushing out into a crystal clear pool that, if warmer would have beckoned you to dive in. The weather was getting steadily worse so we rushed back to the car and rammed the heating to full.

As we left for our next stop hordes of tour buses were pulling in, we knew we’d have to try to keep in front of them. We carried on along the road towards Geyser, the original bubbling hot water pool that shoots up into the air. All geysers are named after the main one here, however this one no longer explodes. The most active one is Strokkur and I couldn’t wait to see it.

We parked up and got a coffee from the restaurant, something to keep us warm as we followed the steamy streams and pools of hot volcanic water up to the main show. Once there we stood, like everyone, with our phones on record waiting. I had read it blows every 5 minutes or so and it was about 6 minutes in when the surface of the water suddenly dipped, rose, dipped again before shooting a spray of water in the air.

Now, I don’t know whether the wind blew it away before it could reach it’s zenith, or if the height and power varies but it wasn’t as impressive as I was hoping for. Slightly disappointed we had a quick wander to see the colourful pool of the original Geyser and, again soaked through, hurried back to the car.

Our last stop on the golden circle was Gulfoss waterfall, a huge river with a couple of falls down into a deep ravine. It’s probably the most well known waterfall in Iceland. The weather had become worse and worse as we pushed against the wind and rain to walk along the path to view the waterfall from above.

We were soaked through but the waterfall is mightily impressive, though the roar of the water was drowned out by the wind. We were stuck among a big coach load of people so we walked back and drove round to the lower viewing area. The weather eased off just for a bit which gave me time to really enjoy the spectacular view without the rain smacking me in the face. 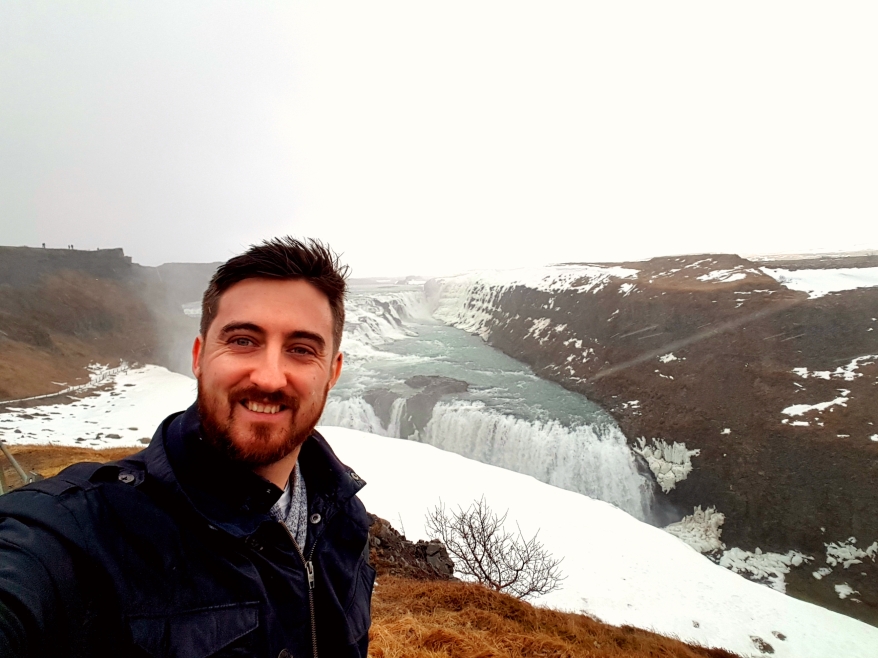 This part of the journey takes around 2-3 hours depending on how long you stay at each place, plus your drive back. We had other plans though, drying off in the car we headed South towards Selfoss, a town that would be our gateway to the Southern coast.

On the way we were supposed to stop and see a huge crater called Kerid but somehow missed it. Arriving in Selfoss the town itself isn’t much but we had a lovely picnic in the car and the rain had stopped! 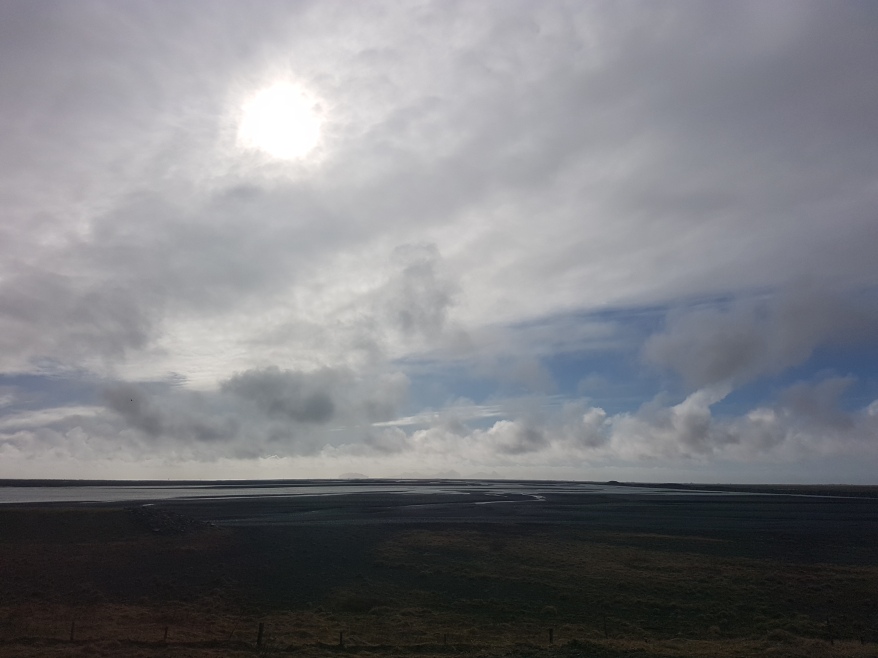 We continued our journey, our eventual destination was Vik, but we had loads to see inbetween. Our first stop was another more traditional waterfall. The drive is amazing as you have the old sea cliffs on the left and a flat wetland out to the sea on your right.

Our first stop was the Seljalandsfoss waterfall, we saw it first from the road and turned off to park up. The best thing about this waterfall is that you can walk behind it! Peter wasn’t up for it but I followed the path up to the right and followed it round behind the falls!

It was incredible and even though I got soaked it was totally worth it, a very magical experience. The sun even came out! There were several smaller waterfalls along from Seljalandsfoss so we wandered about a bit before going back to the car. 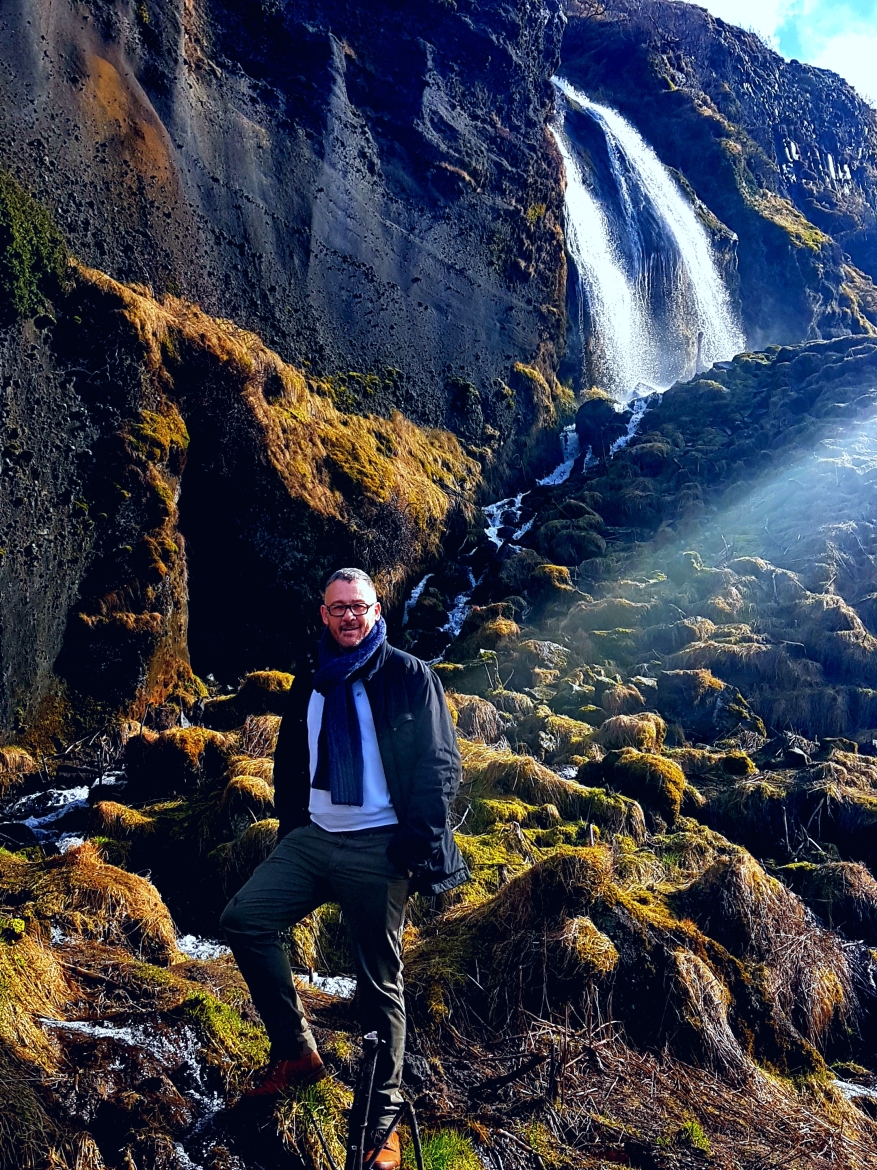 Next on our list was Skogafoss waterfall, an even taller fall that was also not far from the main road. The views on the way were still amazing I would definitely say renting a car is the way forward. 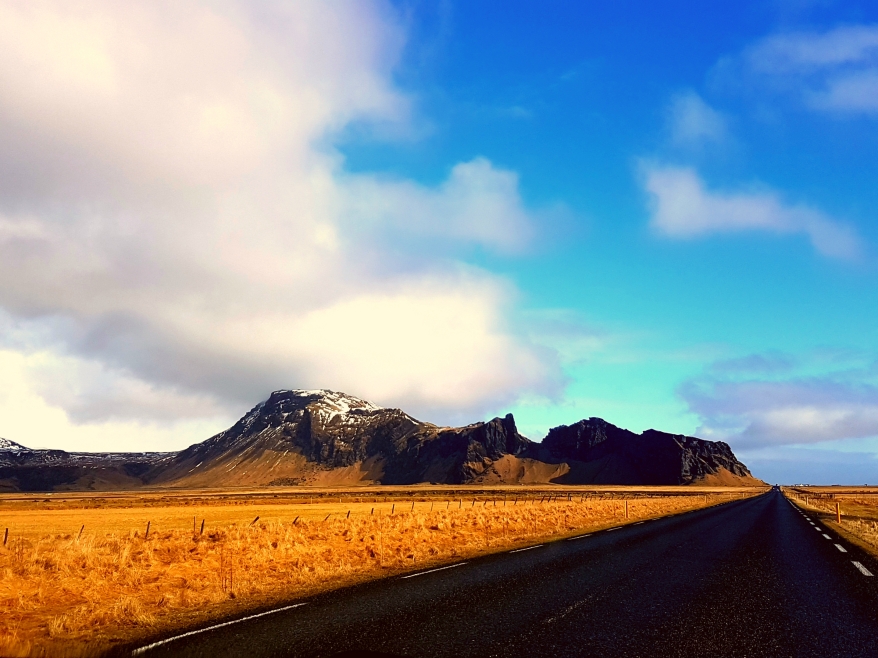 At Skogafoss you can walk up the side of the hill, I think Peter counted around 450 steps or so. Looking down on the waterfall was ace, and the views over the snow covered mountains were good, but the best part of this waterfall came when we climbed back down. The sun was out and shining at this point and caused rainbows to appear in the spray! This was gorgeous and it felt like we were in an enchanted land, we spent a while trying to get the perfect picture but none did justice to how beautiful it was.

We were really excited now, this is what we had been waiting for, incredible adventures, and there were more to come. There are a couple of other things to do along this road, such as a folk museum and Iceland erupts, a small centre focusing on the 2010 volcano Eyjafjallajokull eruption that caused chaos in European flights due to the huge ash cloud. You can supposedly see the volcano from the road but it was still cloudy over the mountains. 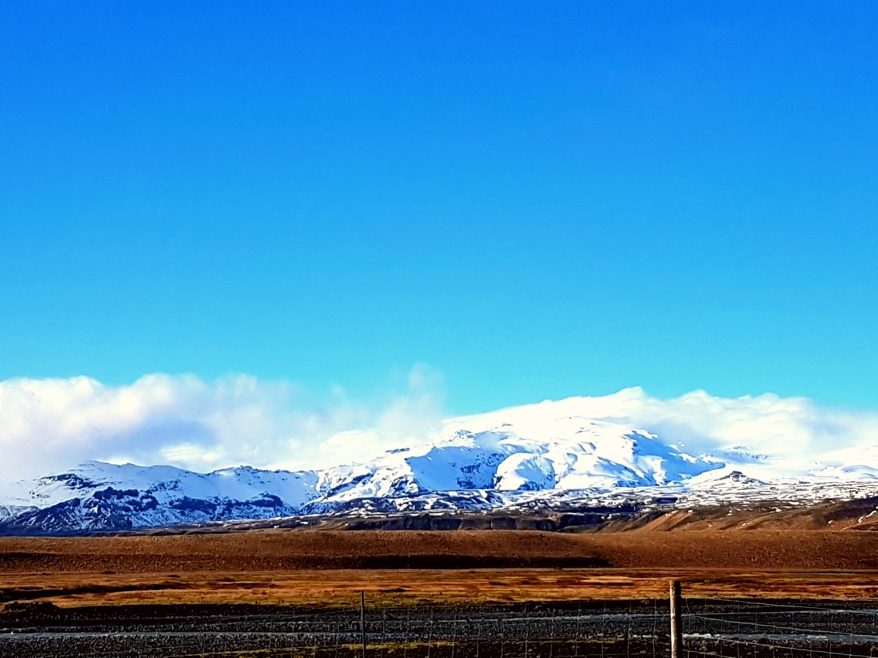 Next up was my first ever glacier! Solheimajokull is about ten minutes off the main road.  As we got out and walked along towards the vast icy expanse Peter was adamant we wouldn’t be able to walk on it. I was adamant that I would be, regardless of all the climbing equipment other people seemed to have with them. 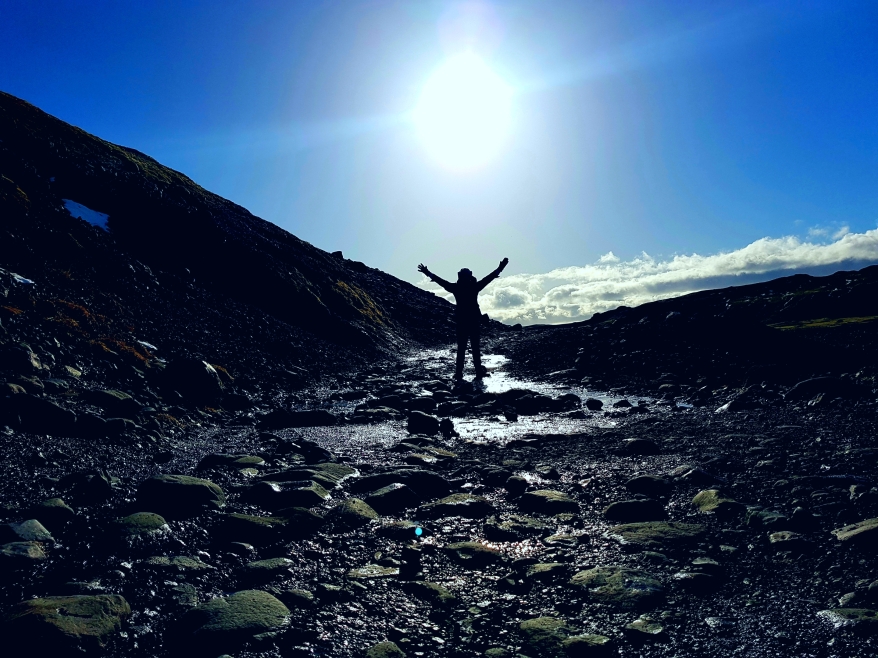 The walk is really nice as you cross little streams and the views of the glacier and the volcanic landscape are really cool. We got closer and closer and I was certain we’d be walking on our first glacier! The lava rocks turned into snow and ice covered in a black dust underfoot. We werr surrounded by different shades of blue ice, and explored some small ice caves and found crystal clear pools of water. 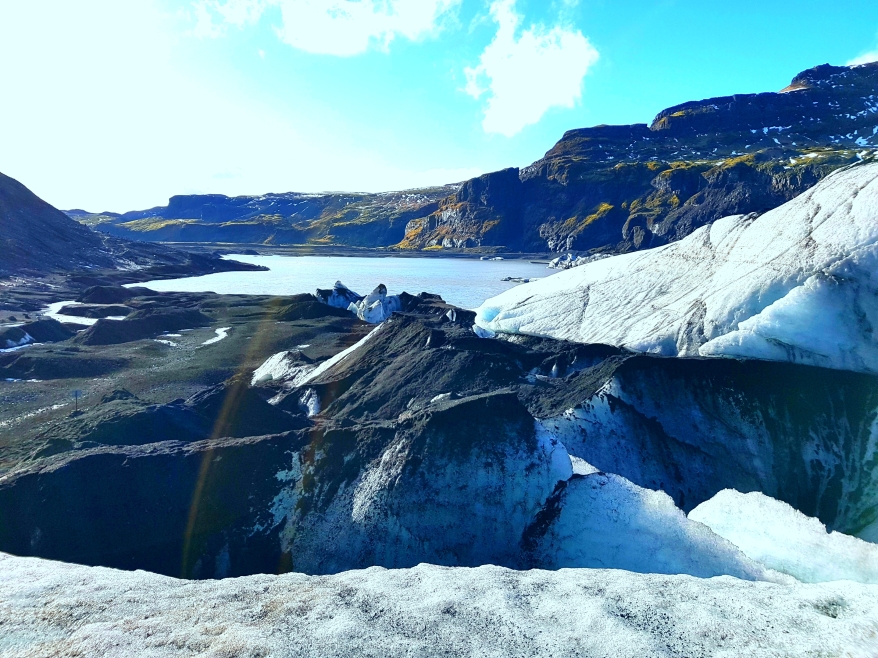 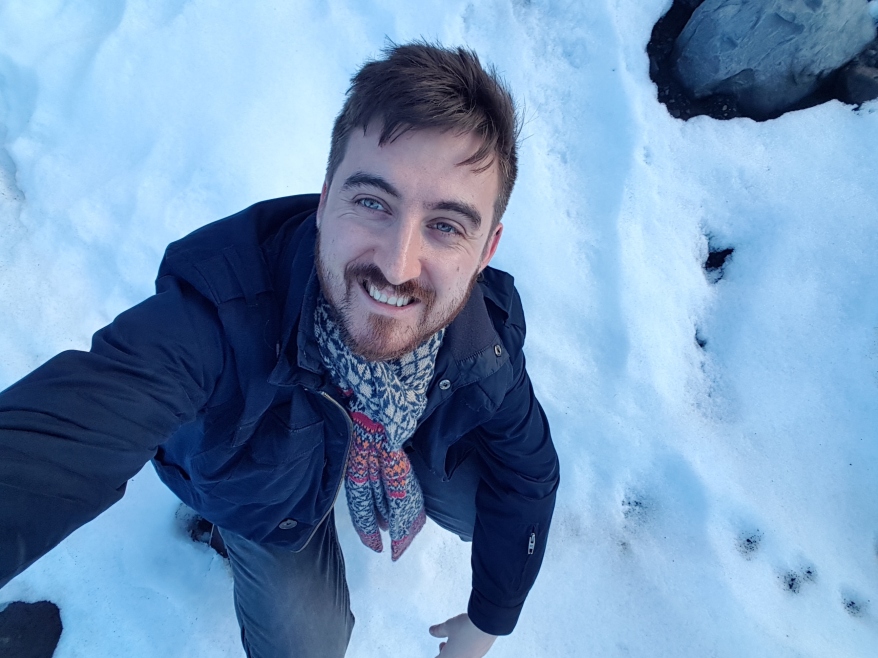 It was loads of fun and we walked along the glacier till we got to climbing hooks and gear. Knowing this was he end of the road for unprepared tourists. 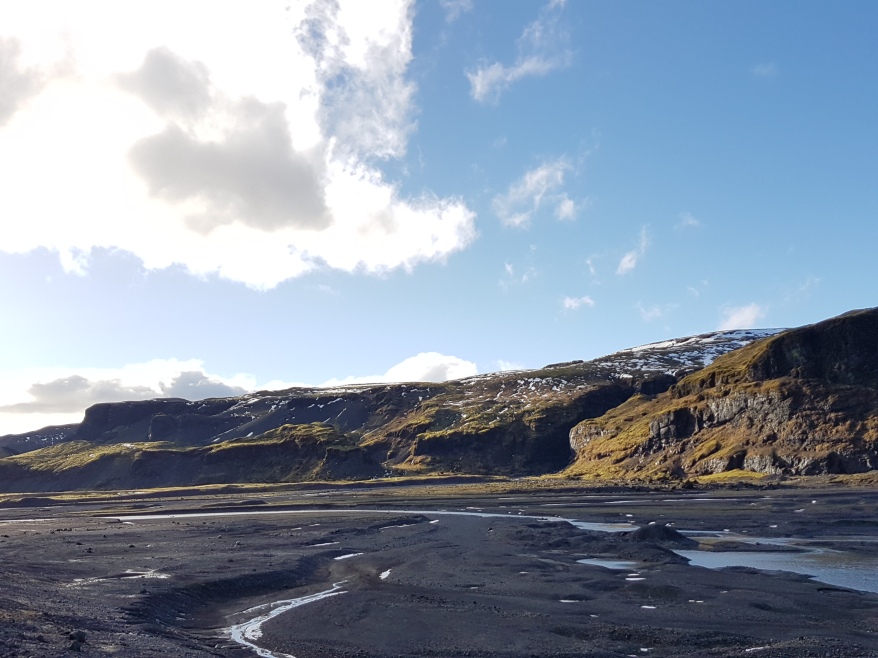 We walked back to the car and realised we weren’t far from Vik, our final destination. Along the way we saw old viking huts built into sides of hills and cliffs and majestic churches sat in solitude.

The weather was great now as we arrived in Vik, there isn’t much here but it’s a natural end point to the sightseeing. We filled the car up with petrol and I tried to navigate us to the beach. We found one right by Vik but I was after something else so we started our drive back. Once we had rounded a rocky outcrop we turned left towards the beach again and found what i was looking for. Huge basalt rocks shaped like an organ’s pipes jutted out towards the sea. 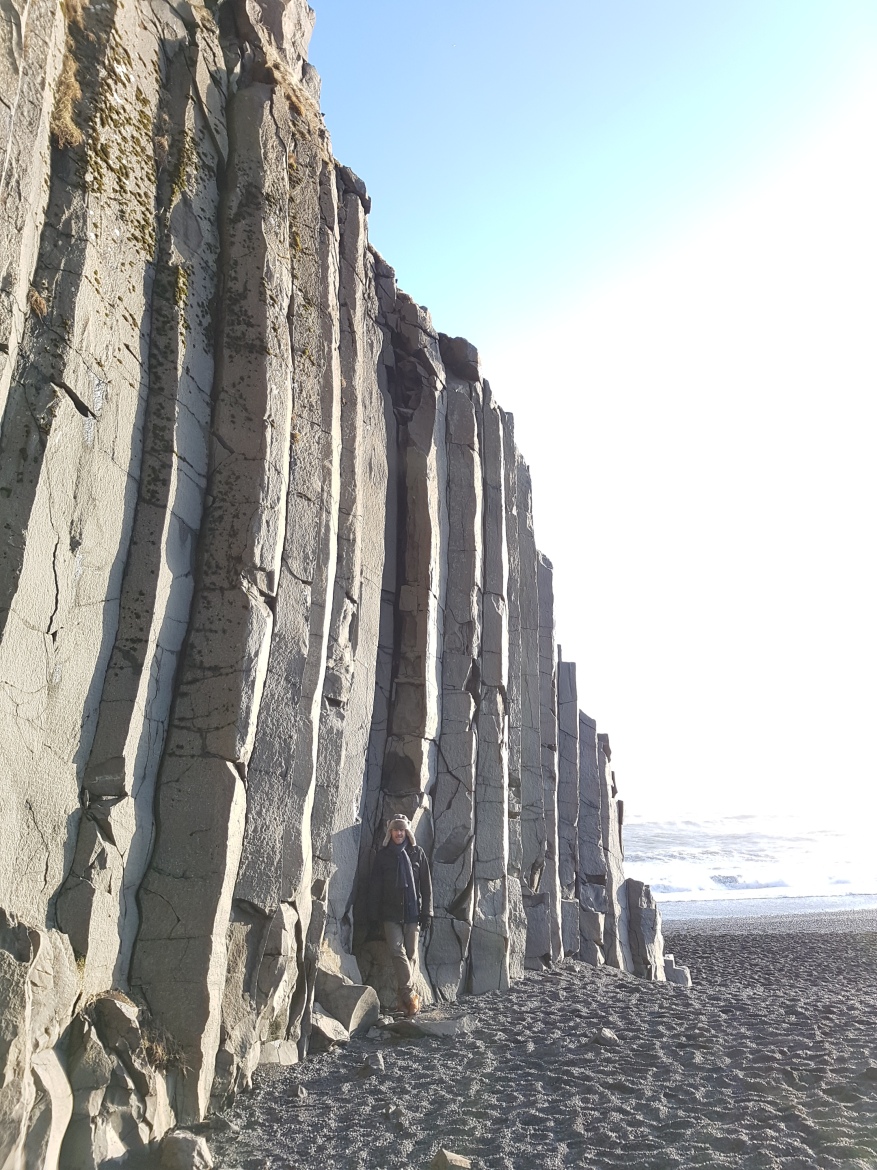 The Atlantic crashed against the volcanic beach with huge waves, the views were amazing out to sea and over towards some interestingly shaped rocks.  We had one last stop however and wanted to get there before sunset.

Nearly opposite the glacier we had been to is a small car park, parking up there’s a long foot path towards the sea. It takes about 45/60 minutes to walk along but you’re rewarded with a crashed plane from 1973 on the beach.  The pilots had to make an emergency crash landing after experiencing severe icing. It’s pretty cool and gives more weight to the otherworldly experience of Iceland.

When we got there a couple were having professional pictures taken on it and there were a few people climbing over it. The sun was starting to set and it was an impressive sight. We took some great pictures and then headed back up to the car. The sun setting made the landscape look like Mars (what I imagine to be Mars anyway).

We drove back with me stuck to the car window trying to see the Northern lights. It had been such a perfect day I thought we’d be guaranteed to see them. Stopping off at Selfoss to grab some dinner we had KFC before continuing the drive. I thought I saw a flicker of something but Peter thinks ot was just a cloud.

We got back late and set our alarms early, 4pm for the flight home and to try to catch a glimpse of the lights before we went. Waking up we were both a bit groggy but cleared our heads and hit the road.  We drove as far south as we could to Grindavik and parked up looking out over the ocean. We didn’t see anything, just getting a fishy whiff from the docks we were in.

Disappointed we drove to the airport and dropped the car off before ending our adventure in Iceland. I’d stood between tectonic plates, watched a geyser erupt, saw spectacular waterfalls including standing behind one and rainbows on another. Walked along a glacier and climbed over a plane wreck. Not bad for a days work! The scenery along the way was stunning  too.