Today was Latvian independence/freedom/creation of the state day, and what better way to celebrate than with free sparkling wine at breakfast! The Wellton hotel outdoes itself on brekkie terms. Mum is a piscatarian and there was enough for her to enjoy but the cooked breakfast side of things was immense. Homemade baked beans, sausage bites and perfectly cooked eggs went down a treat with the champers.

Energised with all the food we had no real plans for the day apart from wandering around the old town streets and watching the parades/fireworks later on. Off we went, round past St Peter’s Church again and a strange statue of some farmyard animals. Enjoying the architecture and following lonely planets advice to look up for the best bits.

Pretend the car isn’t in shot.

We wandered round trying to spot the recommended sights such as the cat haus, where a merchant built his house with the cats bums facing towards the great guild house opposite due to a grudge, but were later turned around.

Next on the list were the three brothers, supposedly the oldest houses in Riga. These weren’t super impressive and a car was parked up outside which lost the magic a bit.

We carried on, this time heading for the river, where there were huge navy ships and tanks parked up ready for the freedom parade. 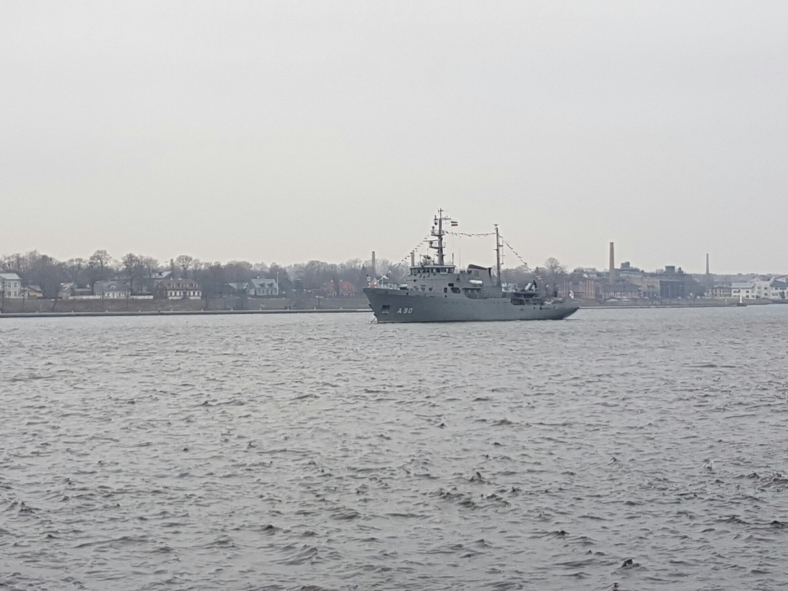 We wandered along the promenade lookimg out for river cruises and enjoying the view of the Daugava river. We found one sign for cruises and decided to head back towards it for the 1pm slot.

By this point we had walked almost the entire stretch of river alongside the main city, we headed inland to the Spikeri quarter, with supposed arts, crafts, cafe, bar venues in old shipping warehouses. Whether it was because of the bank holiday or it just hasn’t taken off it looked very quiet and not much there. 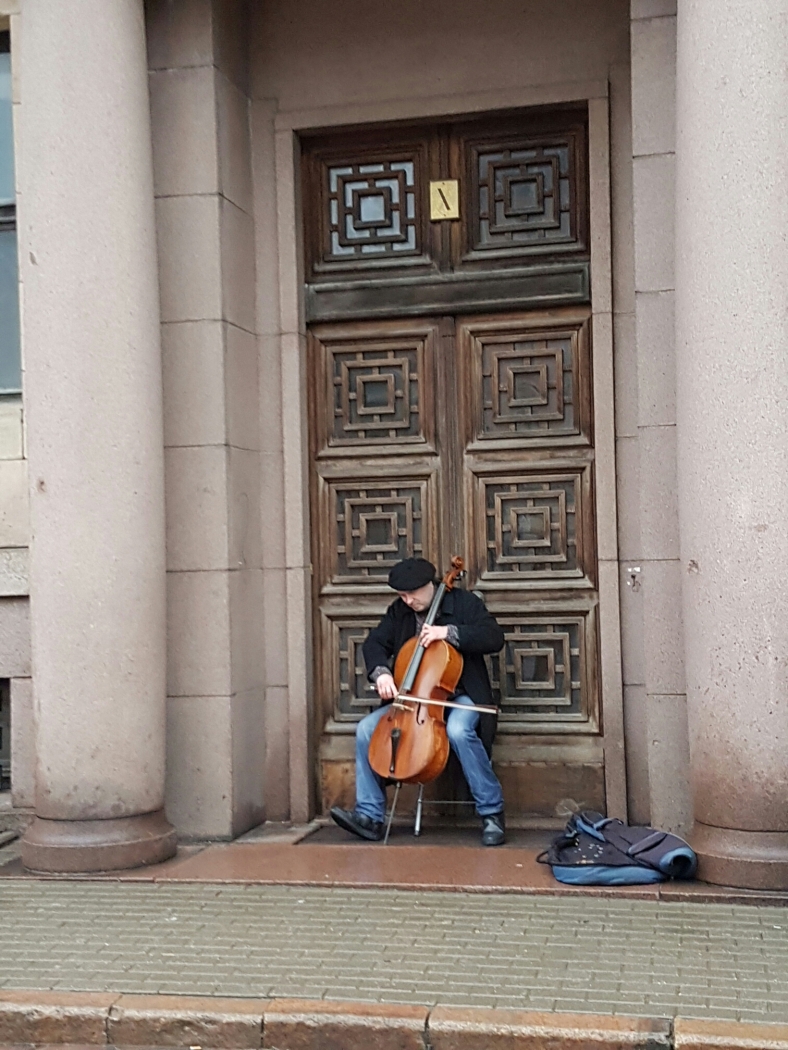 Regardless our main destination were the old zeppelin hangars that now housed food markets. These were great, the first filled with fish counters covered in smoked fish, caviar and some fish that were a bit too fresh. Next up was the veg market, the best thing about the markets was the way they seperated fish, meat, veg and bread/cheese into seperate buildings so you didn’t get wafts of dried fish/refrigerated meat the whole time. 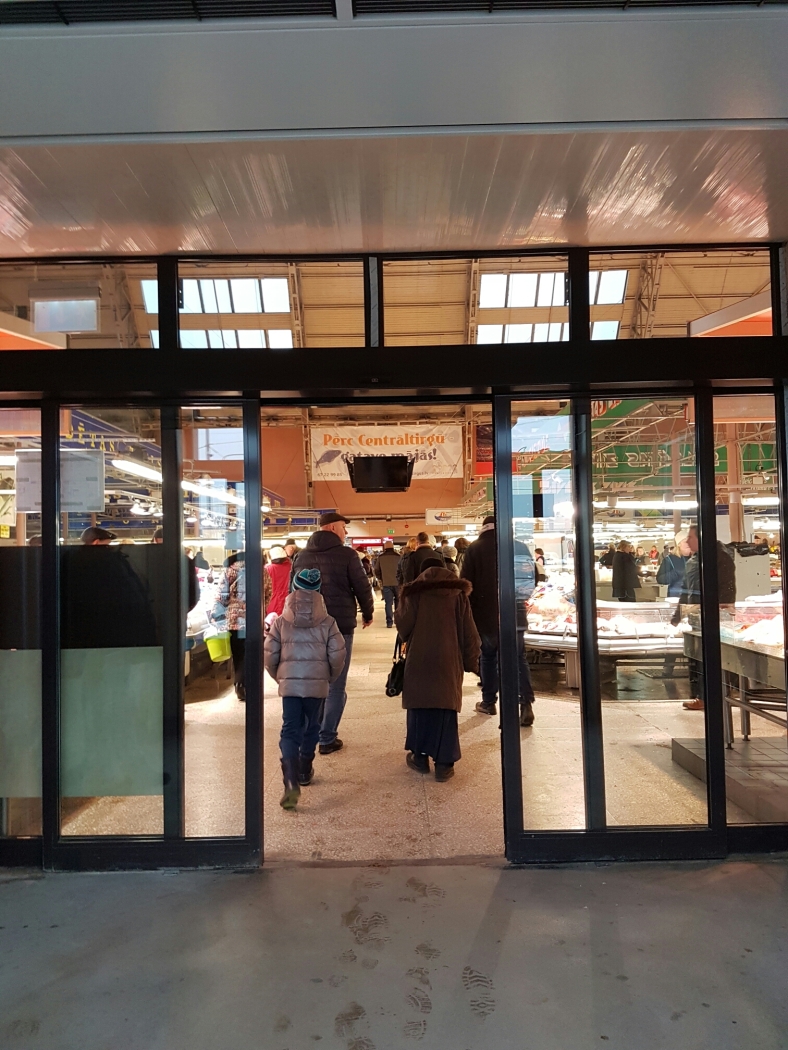 We picked up a couple of things including 1e 100% pomegranate juice and walked back towards the boat trip spot. Unfortunately it had started pouring down and with no sign of a boat we hurried for cover in the old town and grabbed ourselves a coffee and huge slice of cake each.

We warmed up and relaxed after all the morning walking and as the rain seemed to be tailing off we went back down to the river to watch the armed forces parade up and down the street.

It was actually quite good even for two pacifists! It was quite restrained as the president went to each group and said something which demanded a huge roar from the soldiers. Hearing the crowd around us singing the national anthem was haunting as they sang in a low murmur.

Then the tanks arrived zooming up the street and it was over! The crowd quickly dispersed and we did a little shopping on the way back to the hotel. An hour or two later darkness had fallen and we were ready to explore the light festival.

The festival is such a good idea with about 20 to 30 installations around the city, and it was fun just happening upon them. There was a crazy Japanese one projected onto a hotel, flames in the river, and the best one, a load of lights in the park that pulsated to electronic music. The rabbits were back and thete were a few more projections, lights and sounds as we lapped the city once again. 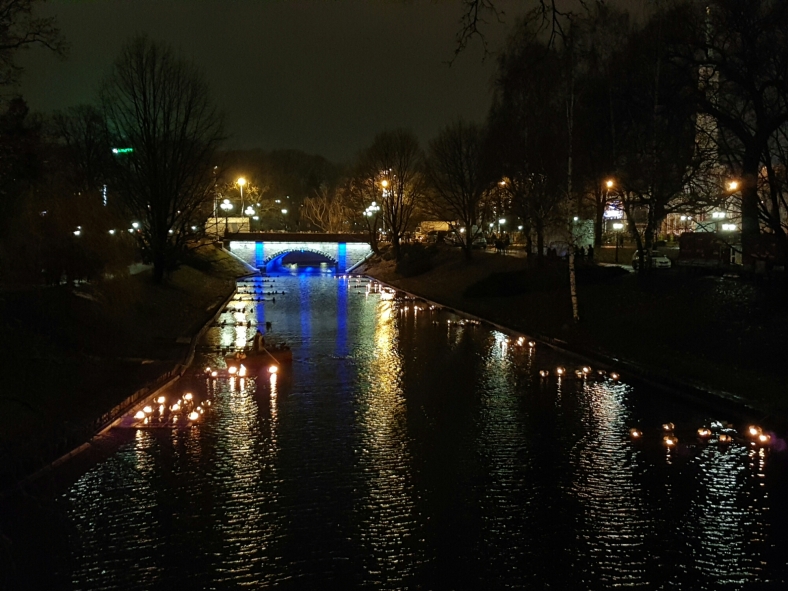 (Fire on the river) 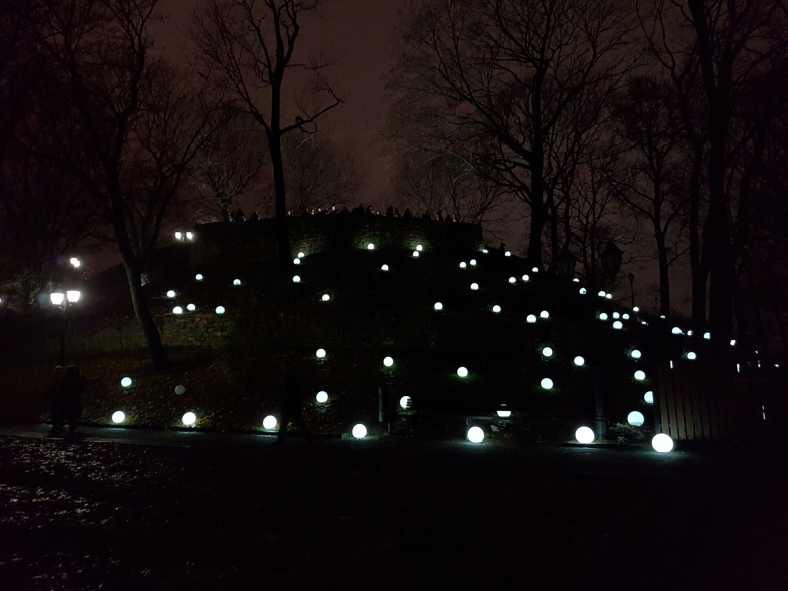 (Lights on the hill)

There were meant to be a couple of installations down by the river but the best thing when we got there were the trees all covered in lights all the way down the promenade. We followed them down towards Riga castle, taking in another light display when we noticed a crowd of people walking with lit torches. Stopping to take pictures the crowd swelled into a horde of smiles, holdimg hands and torches lofted into the sky. They poured out of the small street coming from the main square and wound round the bend and up the same street the military had paraded around earlier.

We walked alongside them back through the city, stopped off to grab some warming mulled wine with cinnamon stick popped in to stir with and ended the march back by the freedom monument where everyone extinguished their torches and dispersed out into the night.

Feeling buoyant from the march we went im search of food and after beimg turned away from several traditional looking places we found ourselves outside the fish place from the day before. 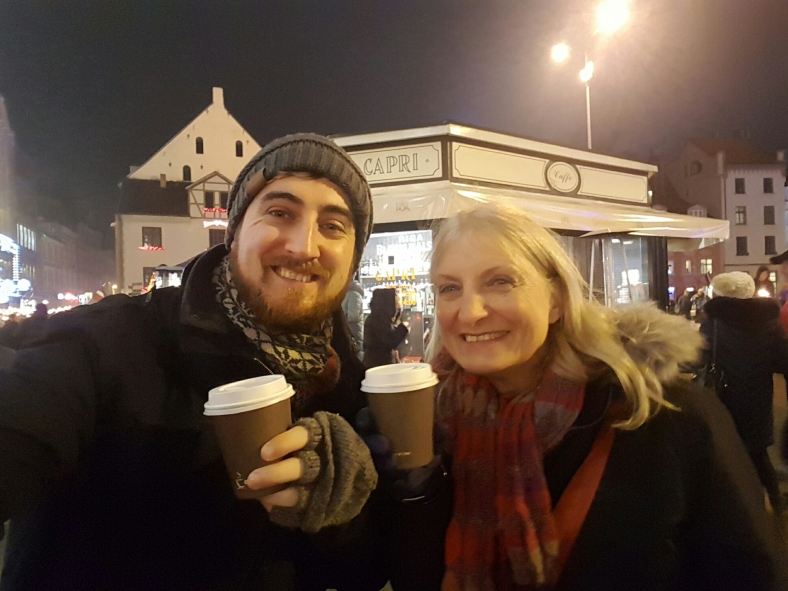 We ordered their local ‘traditional’ fish dishes which were served beautifully and tasted great, Mum had pikeperch which she was apprehensive about but really enjoyed and I had plaice. 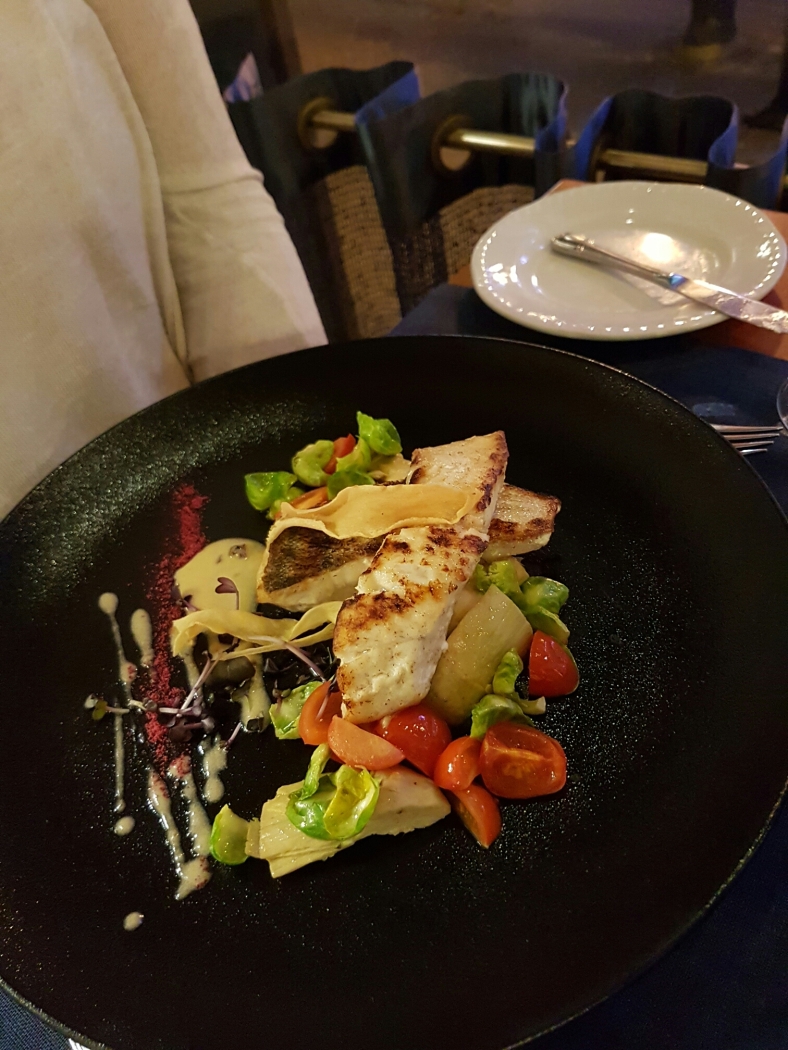 Seeing as our mains were all fish and veg we thought it would be rude to not try dessert so we devoured two white chocolate soufflés as time was running out to get to the river for the fireworks!

We quickly paid and rushed down through the crowd, emerging out onto a raised part of the road when the fireworks began. They were amazing and a good ten minutes worth of explosions in the sky.

The Latvian colours of red and white were a good touch and everyone cheered the final flourish of supernova fireworks. 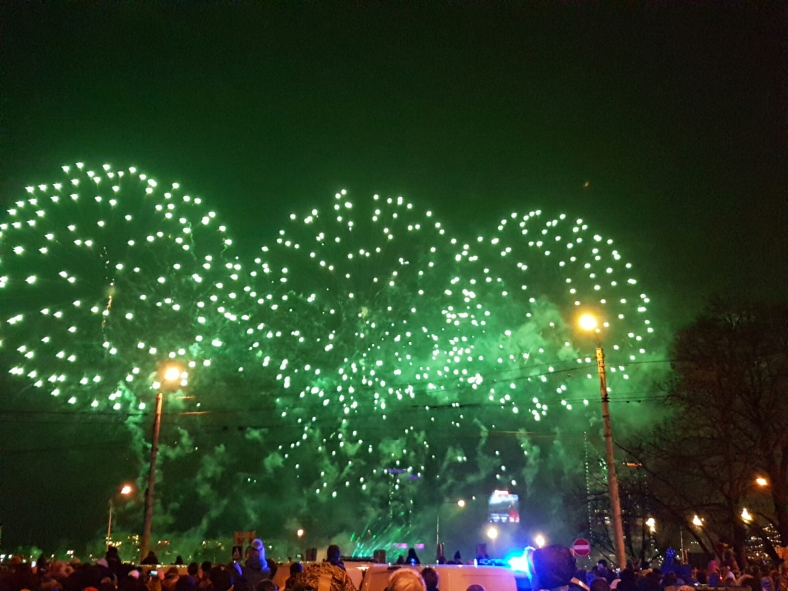 We were up early the next dayvso skipped our night cap and slowly moved with the crowds back to the hotel, ready for an adventurous day in the countryside.

Which City would you go back to time and again?✌️🦊 . The classic red telephone box in London. A City I've visited so many times and yet I feel like I've barely explored half of it. 💂🇬🇧 . It's also a great queer destination, with the classic Soho area full of queer bars and shops and the more alternative Vauxhall just across the Thames🏳️‍🌈♥️💜💛
Nothing like a crisp and cold Fat Yak to help you cool down in Brisbane. ✌️🦊 BREW serves great veggie food and a great array of beers. ♻️ . What's your drink of choice? I'll always revert to a nice beer. Cheers! 🍻 or in Welsh, Iechyd Da! 🏴󠁧󠁢󠁷󠁬󠁳󠁿🍺
The beautiful white Hsinbyume Pagoda outside of Mandalay. It's a short but pretty boat road up river leads to several amazing pieces of architecture. It's based on the mystical Sulamani pagoda from Buddhism. 🇲🇲💛 . You can spend a good few hours exploring this area, and there are plenty of photo opportunities for the 'gram ✌️🦊😆
Just over two weeks until we start our adventures again. Heading back over to Melbourne for a month and on to Mexico! ✌️🦊 Just 11 night shifts to go 😆🏥
Nothing like being rewarded with scenic views after a hike through the woods. ✌️🦊 . What can we all do to help the environment?? I've been cutting down on all plastics, been vegetarian for 2 years now and I use public transport. My one vice is flying! What good advice do you have??? Let's share! . Picture by @bokudesu ♥️💜🧡
🦊✌️Introduction Time! ✌️🦊 . I recently realised thanks to @thehackerette that I'm not as social on social media as I thought. So here's a few facts about me! 📝 . My name's Tom, I'm currently 32 and I'm from a small country in the UK called Wales! 🏴󠁧󠁢󠁷󠁬󠁳󠁿 I identify as gay, and I'm proud to support the LGBTQA+ community, and I'm a strong believer in peace and love over hate. 🌈♥️ . I live and work in Manchester, one of the biggest cities in the UK. I work as a nurse, and I love every minute of it. 🇬🇧💂 . In 2017 after travelling around the Balkans for a couple of weeks I decided to quit my regular job and work through an agency. This has allowed me to visit sooooo many countries over the past few years. I love that I can do both things that I love, travel and caring for people. 👨‍⚕️⛑️ . I'm a huge Arsenal FC fan, I love Nintendo, anime and anything Marvel. I currently have 16 tattoos and I'm a bit addicted. ⚽🎮 My partner @bokudesu lives all the way in Australia so we're currently experiencing a very long distance relationship! 🇦🇺🌏 . If you've made it this far, and you want to know more, just ask!! 😁🙈🙌
Did you know Canberra is the capital of Australia??✌️🦊 . If you're visiting, make sure you check out the Anzac parade, this boulevard runs from the man-made Lake Burley Griffin up to the Australian War Memorial museum. 🇦🇺🌈 . Along the parade are memorials to each war that Australia has been involved in, starting with this, The Boer War in South Africa. Australia supplied around 43,000 horses to the war which was mainly fought by mounted infantry. 🌍🐎
Dreaming of sand, sea and sunsets ♥️ . Where's your first 2020 destination?? 📸🌍
GIANT ALERT! 😲✌️ Meet Rambo, the giant merino ram. 🐏🇦🇺 . Fun fact, Australia is full of big things! When taking a road trip, make sure you coordinate your rest stops to take in such beasts as the big avocado, big shrimp, big banana and big koala! 🥑🦐🍌🐨 . It's also more important than ever to visit those places that have been affected by fires and spend your money there. Every little helps in these rural communities. ♥️ . 📸 By @bokudesu