Up at 7am we had a quick breakfast, checked out and sorted leaving our bags at the hotel and embarked on the one to two hour bus journey out of the city.

After the war museum yesterday it’ll be good to see how the Vietnamese fought back in the face of greater weaponry and money. The bus journey was nice and we saw more familiar Vietnamese countryside, Liam chatting away to an Australian couple.

Arriving to a horde of buses and tourist groups we knew what to expect. We did a group bus with around twenty or so other people and had a tour guide to take us round. Tickets were included so we walked through a large tunnel similar to an underpass at home and emerged into the jungle!

First up on the tour was a video explaining more about the war and why the communists lived and fought in this area. As we were watching we could hear shooting in the distance. Then we were taken to a hole in the ground where north Vietnamese would hide and ambush the enemy. We could get in the hole if we wanted and I jumped at the chance, hopping down into the hole it was pretty snug and I got to hold the wooden camouflage board and sink down till I was hidden in the cubby hole. 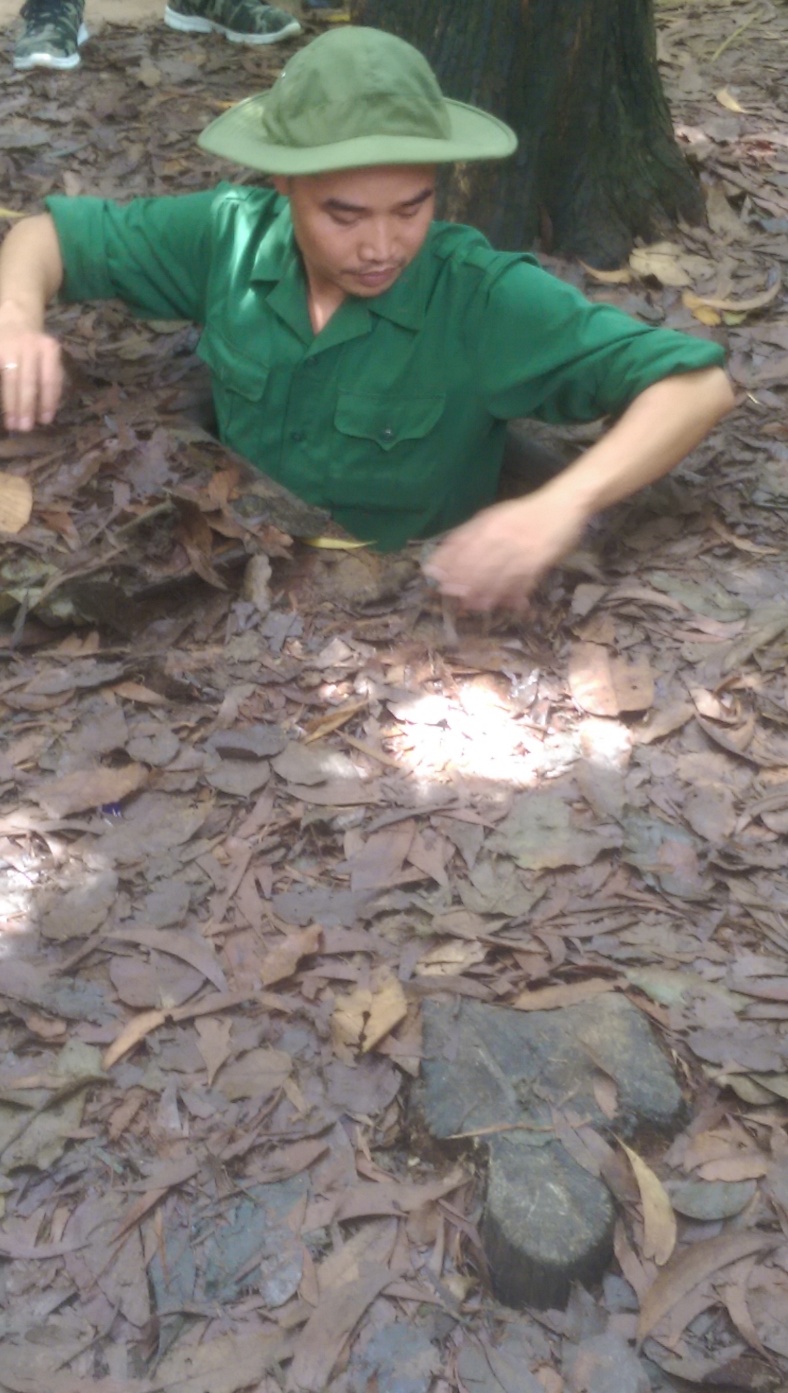 It was fun and I couldn’t wait to get down into the tunnels for real. Our guide explained some maps to us and showed us a bamboo trap. Next stop on the tour was an old tank that the Vietnamese had damaged, so we got up on it and got a picture! As we walked through we saw more traps that they used, plus kitchens and living areas. The smoke from the kitchen went through a tunnel to come out far away from the base.

After this we stopped for 15 minutes so people could shoot different guns at a range, I’m not a big fan of guns and passed and the others did the same. Not many, if any of our group had a go, we got ice cream instead. Finally it was time for the tunnels, you basically queue up and go down into a larger area before heading down again into a small tunnel big enough for me to squat walk through. You could go through the tunnel for 20metres up to 100metres with various exits along the way.

I went in first with Liam behind me, I had gone about 5 paces when I heard Leia shout ‘I’m going back guys!” in a worried voice. Liam and I persevered to 20 metres where I was left alone as Liam exited. I could hear voices coming from further along so I continued round and soon caught up with another group, we dropped down lower and lower and I started to think maybe we were lost! It was hot and hard to breath but eventually after sliding down a slope on my belly and then crawling up a slope we emerged to the rest of the group. We were hot sweaty and dirty but everyone who made it the whole way through were pleased.

We got to have a quick freshen up in water and sat down for some food that the Viet Cong would have eaten. So we got a tea of some kind and tapioca with a crushed peanut dip. The tapioca was a little dry for my tastes it kinda sucked the moisture out of your mouth, but the dip was good and I liked the tea.

With that we went through a few more living and working areas, including one which showed how they attached stuff to the bottom of their sandals to throw the enemy off their trail.

We also learnt that they would put enemy clothing or chilli and pepper around air holes to prevent dogs from sniffing them out.

It was a fun day and I would definitely recommend it. It was like being cattle herded through but I didn’t find us waiting for long periods. After this adventure it was back on the bus, where the guide apologised as he had left two people behind at the film area! It was pretty hilarious but I felt a bit sorry for him, it’s busy and you need to keep an eye on your guide and the other people in your group.

Arriving back at the hotel we grabbed our bags and marched down to the sun tourist. I’m going to miss Vietnam, the people have been amazingly friendly, the food incredible, and the history sad but with a positive outlook. Though I think with our schedule and the weather forecast it’s the right move. I definitely think I’ll be back one day, It’s been my favourite country so far.

We were soon on a dodgy bus with bags and bags of something covering three quarters of the bus. The chairs were pretty comfy though and it was only $10 for the 6.5 hour bus journey over the border to Phnom Penh.

The journey was uneventful, immigration was simple with the bus guy taking our passports and dollars for the visa and sorting everything out while we waited at a restaurant and had some cheap rice and meat.

The only downside were the amount of mosquitos around but we just slathered the deet on when we got back on the bus.

Once in Cambodia we were driving along dark roads when the bus stopped and the driver and bus guy got off, started inspecting the rear wheel and quickly got the toolbox out. It wasn’t long before they fixed whatever the issue was and we were back on our way, a little more nervous when going over pot holes.

We arrived in Phnom Penh but the bus, heading in our hotels direction turned off away from the centre. Surprise surprise it dropped us off at a spot with about 6 tuk tuks. On principal we refused as it was only a 20 minute walk to the hotel.

Immediately we noticed how much dirtier Phnom Penh is compared to other places we had been, and it was pretty late, 10:30 pm so we quickened our pace to the hotel, down one particularly dodgy looking street with rubbish strewn everywhere.

In the end it wasn’t so bad finding the SLA boutique hotel and the room was huge. It was meant for 6-8 people but was only £50 for two nights which was within budget. It was nice to have our own beds and space, after the bus journey and the dodgy walk up it was 11:30 once we settled and we just passed out one by one, ready to see what awaited us I’m the daylight.