Waking up feeling a bit worse for wear we managed to get to breakfast at the hotel, it had rained and rained all night and was still going as we got ready to head out. 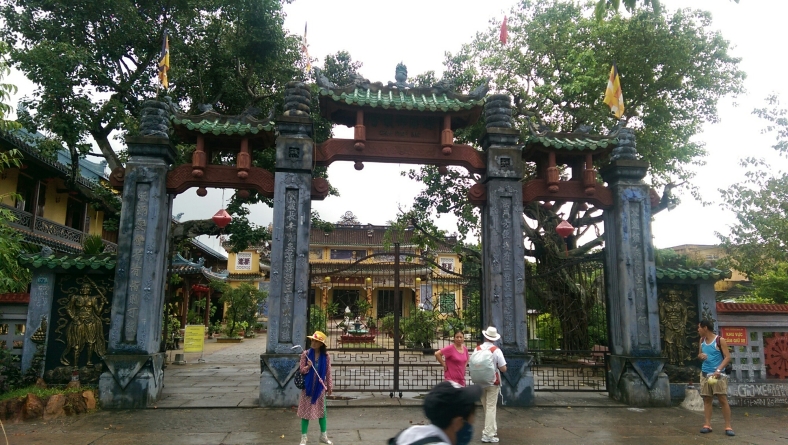 It’s unfortunate but the rain does put a dampener on things, if it was rain we were used to it wouldn’t be so bad, this is rain on another level.

Everyone I spoke to before the trip said that even if it does rain, it lasts for an hour or so then it’s glorious sunshine. Not in Vietnam! It rains and rains and rains, the only difference is the power of the rain.

We waited till it had eased off and went back down to the old town. Finding a small cafe type place to eat. As we were eating a particularly strong downpour came and flooded the whole street! It was about 3 inches high. It was crazy how much rain can fall in such a short time.

Once it had cleared a bit we bought a ticket for around £4 that allows access to five historical sites around Hoi An and went to the first, an assembly hall. It was very pretty with lots of carvings and murals but not very interesting. 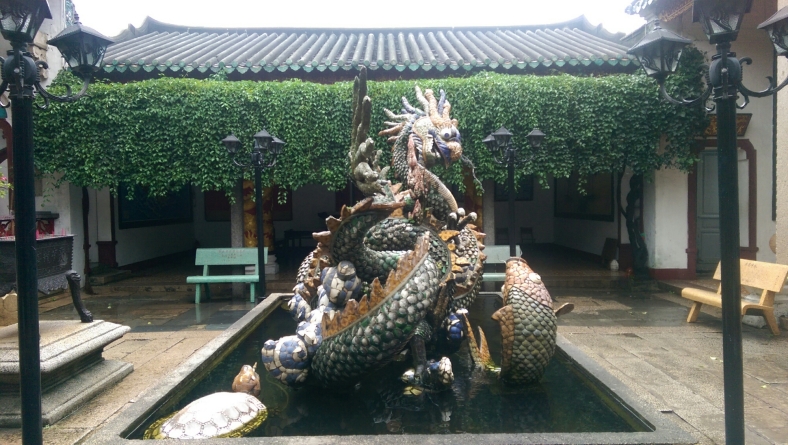 It felt like things we had seen a lot already, next up was the Japanese bridge, this was very nice and interesting two dog statues guarded one side and monkeys guarded the other.

Deciding on the traditional house we walked in and were given a tour of the house which was basically going from one seller to another being asked to buy touristy gifts. There was however a great balcony overlooking the street and a trap door for when the house floods.

We saw an uninspiring communal house, which was pretty but nothing much to see. It’s nicer just to wander round the streets and maybe sit and absorb the culture of the place that way. It was handy to be able to go inside when it’s raining and it’s pretty cheap really.

It probably didn’t help that we were a bit tired and hungover, we crossed a bridge further along the river and made our way back stopping for a fresh donut for 30p and then ice cream. This place had 57 flavours! Loads of toppings but was a little pricey. It tasted great though. I had a peanut butter scoop and a banana toffee scoop.

With one ticket left we went to a random museum but no one was there to take our ticket, we wandered round but it was a lot of clay pots and nothing more. Realising we were in the wrong museum we went along the river to the folk culture museum. This was probably the best one for me. It was a lot more interesting seeing how they lived, fished and hunted. 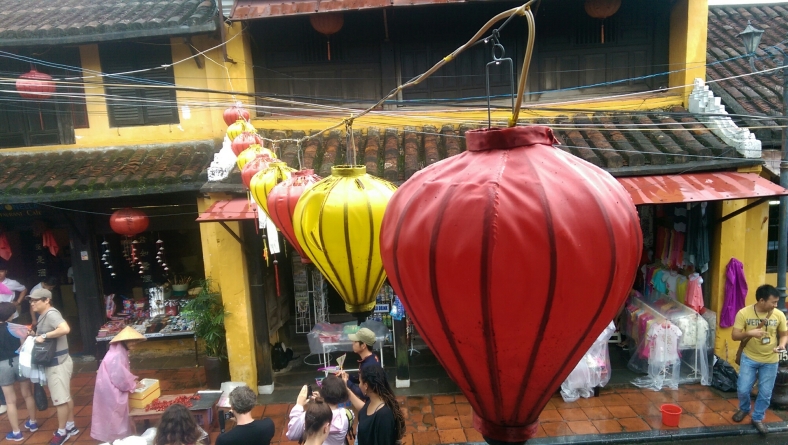 Towards the end there was also a display on silk worms which I always find fascinating. A young girl came out and told us how the pupae is a delicacy and showed us the best way to test if something is 100% silk. Apparently you burn it! If it smells like hair being burnt it’s real silk, if it smells like paper or plastic it’s fake. We watched as she set fire to different materials and we smelt the difference.

Ready to go test the silk we went to the market. Even though they’re often quite samey I never completely tire of a good market. The variety of fruits, veg, meat, and fish is always fantastic and watching these old women chopping pork joints up or scaling fish is always interesting.  The rain started up again with a vengeance so we evacuated the old town to take refuge in the hotel. 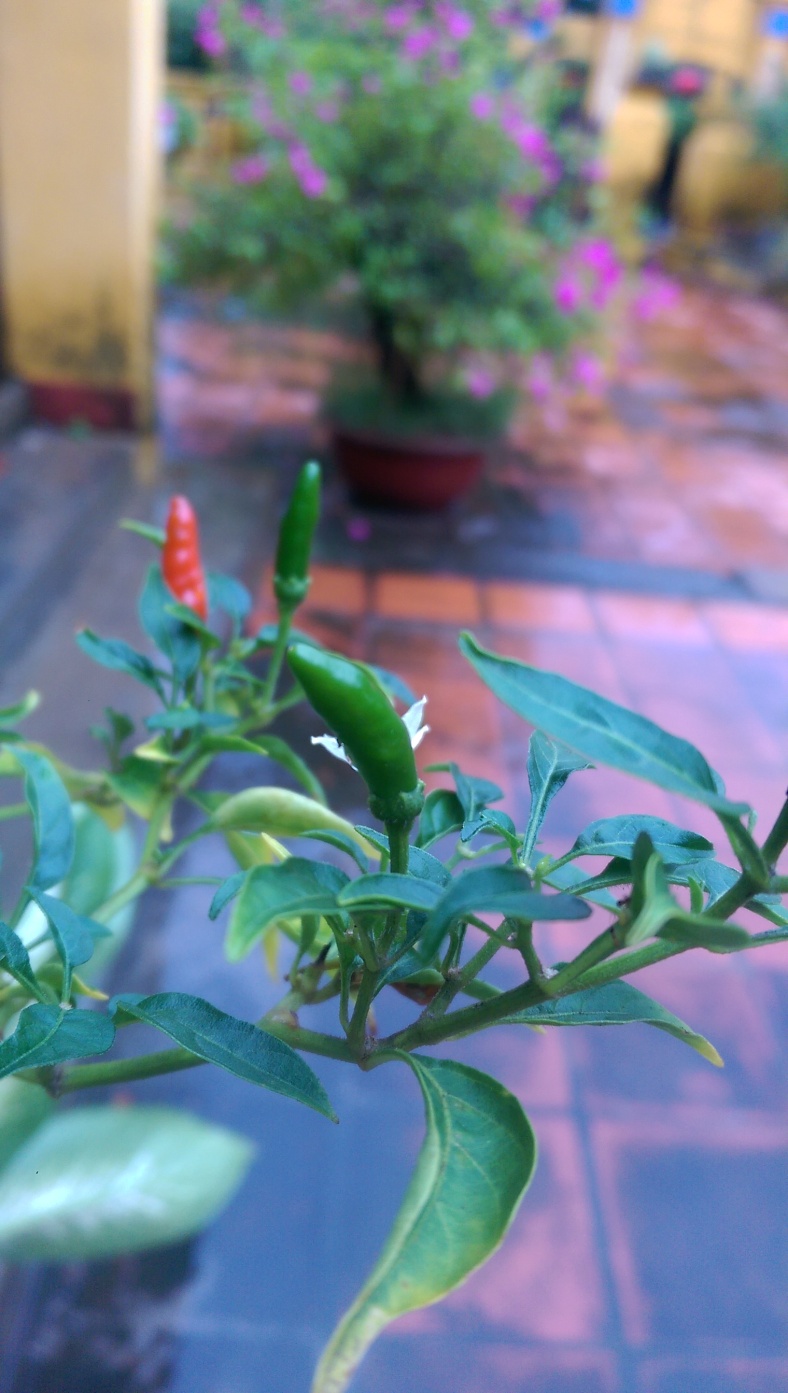 We organised our next day, flying to Ho Chi Minh and an above budget hotel to have some luxury. I then found a good sounding restaurant for the evening, so we relaxed for a bit then once more went into the night. The place in question is Ba Le Well, it’s hidden down an alleyway on a main street on the edges of old town.

A man on the street shouted the name to us and gestured us down this small passageway. Coming to the restaurant we were sat outside under some umbrellas and within a minute the food was served! It was similar to Leia’s starter from the night before. Loads of bbq pork skewers, leafy salad, spring rolls and kimchi type cabbage. You wrapped it all up I’m rice paper and dipped it into a spicy satay type sauce.

A girl rolled our first ones then we were left to our own devices. Devouring the wraps they brought over the eggy pancakes I had the night before and we wrapped those up too! We were insatiable and before we knew it was all gone. Nice and full we chatted to a waitress called wing, Liam using his new found phrase oh choi oi to good effect she asked him to say it again and giggled.

She was lovely and wanted to improve her already decent English, so we talked for a bit, not always understanding each other but it was nice. I think this place is all you can eat but we only got extra rice paper. It cost around £3 each which is again pretty pricey but there’s some good novelty involved. It’s hard sometimes as £3 is nothing but when you know you can get the same for £1 it’s difficult not to judge.

Knowing we had a flight the next day we went for one more drink on the terrace overlooking the river and called it a night. Ready for the taxi to take us to Danang airport in the morning.