We woke up to resounding headaches all round. Although Leia seemed to be suffering the most. Not letting this hold us back we started getting ready.

My turn for the bathroom came so I went in, got undressed and utilised the toilet. As I was sat there a weird noise started up from the door. The next thing I know there’s a pretty big cockroache staring at me from the bottom of the door.

The noise it made was so loud! I jumped up as it scuttled towards me. Not wanting to worry the others I danced around it, still completely starkers avoiding it as it ran around desperate for darkness.

Eventually it made it’s way behind the bath tub that I was now going to use to shower. I gritted my teeth and tried to not worry about it. Safe to say the shower was a quick affair. I got my stuff and Leia quickly ran into the toilet. I told Liam what had just happened and best not to tell Leia as she would freak out.

Next thing we knew one came crawling from a shelf that went around the ceiling, this one was even bigger! It fluttered down the curtains and up the wall. I tried to name the one in the bathroom Carl to humanize it to no avail.

We squished this one but it didn’t stem the tide.

I think we just made the other roaches mad. We started hearing these scratching noises all around us on this shelf above our heads. Using our selfie stick and phone we ran it around the shelf looking for the noise when another one even bigger flew! down into the room onto my bed we all pretty much screamed and jumped about. That made three in the space of ten minutes so I went to the concierge to tell them.

Obviously for her it wasn’t so scary as they’re one of those things that you get used to. Being from Wrexham however we’re not used to seeing them and I think their association with dirtiness doesn’t help.

We were practically ready so we all waited in the lobby while she apologized profusely telling us they were doing something downstairs in the restaurant to get rid of them so they must be travelling upwards! The lady was very nice about it all and they said they’d have them gone once we went out so we left worrying about sleeping there with these things crawling all over us. The best part is that it definitely helped us forget about being hungover.

So we hit the streets of Hanoi and it was hot and crazy. Just like last night. We figure that the rules of the road are there are no rules. Just try not to hit other vehicles/bikes/people otherwise anything goes. Crossing roads felt like an achievement every time. A lady carrying a bamboo pole with fruit hanging off either end managed to place it on me, she tried to get the others to take a photo but I handed it back and kept moving knowing there would be a price to pay.

We arrived at Hoan Kiem lake and it was lovely. After getting cherry and passion fruit ice cream respectively we casually strolled around the edges of the lake, enjoying the cool breeze and shade afforded to us by the trees. Some of the trees seemed to grow horizontally out into the lake and lots of people were using this idyllic spot in the city to take pictures. One girl had even brought balloons to hold and was jumping in the air for each pose. We spotted a place to stop and sit down at the southern tip of the lake and had some refreshing drinks. I had a lemon iced drink and Liam had watermelon. Leia could only suffer a water at this point. 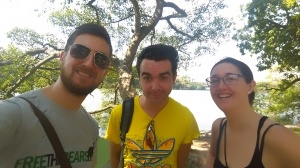 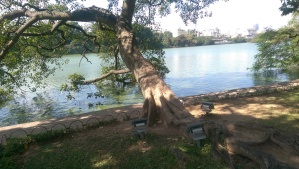 It was really interesting and I noticed how it was definitely done in a way to build up the French and Americans as the ultimate evil, especially the ‘imperialistic U.S.A’ but made the northern Vietnamese out to be saints in comparison. 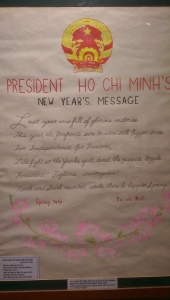 I don’t really know enough about the fight for independence and later the Vietnamese war but I found learning about the horrific conditions the French kept their prisoners was quite upsetting. There was a lot of propaganda about how the captives kept up the communist cause even within these walls.

Later exhibitions showed the ‘luxury in comparison’ conditions that the pilots were held in. Where they played basketball, billiards and had Christmas dinner. A Dar cry from the shackled commumists being fed parasitic rice and old pork.

There was a corridor with newspaper cut outs of all the protests against the Vietnamese war, and the fight back by the northern Vietnamese.

After enjoying the cultural side we needed food, and found a lovely little place selling banh my, which is just bbq pork in bread. We got pulled pork with a slightly spicy sauce and it was so tasty. Just what we needed. Liam had freshly squeezed OJ, Leia had a Vietnamese coffee with condensed milk, and I had a peach and lemongrass tea. All were very yummy. 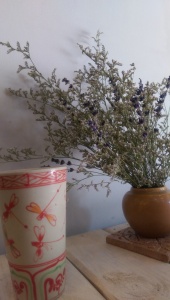 We continued our walk through Hanoi, passing a statue of Lenin and posh looking embassies. Finally we made it to the Ho Chi Minh museum and one pillar pagoda, this particular pagoda was exactly what it said on the tin, a quick picture with it and we headed into the museum.

The first floor was full of newspaper articles, pictures and dedications to Ho Chi Minh. It definitely showed us just how important a figure he must be to many Vietnamese. A founding father of their nation. There was even a portrait done of him in the artists blood after he died, and another done by an artist who was blinded in the war which was pretty good for someone who can’t see.

It was nice to see how much Vietnam has developed out of what were dark times for the country in colonialism and the war.

The next floor was a strange art inspired dedication to ‘Uncle Ho’ there was an artistic impression of his childhood home. A volcano, a giant table with giant fruit on it, and the cave where he led the push for independence designed to look like a brain. It was enjoyable but you probably need a guide of some sort to get the full impact of the installations. I’m sure my arty mum would have enjoyed it.

Thoroughly cultured up in Vietnamese history we walked past Ho Chi Minh’s mausoleum which is closed till November so we couldn’t go in, but it was heavily guarded, you weren’t allowed within a certain amount of feet of it. Although some enthusiastic Chinese tourists attempted to get closer for a better picture but we’re soon moved on. 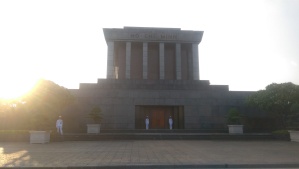 I had looked at the map and read that another like in the north west of the city wasn’t far so, now feeling pretty tired, we staggered our way there.

Stopping off at a coffee shop converted from an old ferry we planned our trip to ha long bay, eventually booked a 1 night stay on a Chinese junk with meals and activities included. Knowing we would have to be up at 7 the following day we started back in the direction of the hopefully cockroache free hotel.

We stopped off at a busy outdoor food place, perched on a tiny stool next to a Vietnamese man who was cooking for about 40 people with one helper and a cigarette never far from his lips. Leia had beef and chips with a baguette, Liam had deep fried prawns and I had a chicken wing. There were things on the menu I would’ve liked to try like eel, frog and pigeon which the locals were going for but being hungover I didn’t fancy being experimental. Looking back on it now I wish I had, and I want to start trying different things more often. 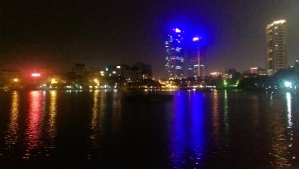 We finished up and continued through tight streets avoiding mopeds and people all the way. Stopping off at another shack to eat spring rolls, rice and 4 tiny ribs. Satisfied we arrived back at the hotel, sat on our beds and listened to signs of life above us. Liam was super brave and checked the shelf with his phone. There were no cockroaches up there thank Buddha.

I think we all had a slightly restless nights sleep thinking about what could descend upon us at any time, Leia heard noises up there and saw the curtain moving, but we left the lights on to discourage them and didn’t see anything.

It was soon 7am and we were ready to hit Ha Long Bay, a supposedly must see sight in SE Asia.