Arriving in Doha and getting blasted by the desert heat at midnight was an experience, which quickly made us understand the thrill of air con, something we wouldn’t forget after reaching Bangkok. 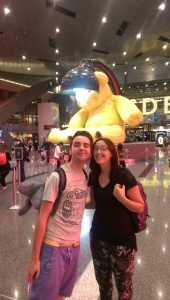 We were quickly through security and only had an hour or so to kill in the huge terminal. We didn’t explore much as we were starting to tire and pretty much went straight to the gate.

When we boarded and first witnessed the Airbus A380 our collective mouths dropped at the size of it! Double Decker! Though us poor plebs were stuck on the bottom deck with thoughts of what luxuries awaited those who were in guest class.

Unfortunately the seats on this plane weren’t as comfy, considering we were hoping to sleep for the 5 and a half hours of flight time this was unlucky. Although Leia and I gave it our best bet we probably managed a couple of hours if that. The flight itself was so smooth however you hardly noticed you were 40,000 feet in the air! The breakfast/lunch was a choice of fried fish with Asian influences, Tofu or chicken in peppercorn sauce. None of which went down well with our unrested, slightly hungover bellies.

Even though this flight was an hour or so shorter than the first it definitely seemed to drag on for longer. Probably over exciting ourselves on the first didn’t help.

Anyway, we finally made it to Bangkok at 12:15pm after leaving on Monday at midday to get to the airport. Obviously the time difference is +7 hours and it actually wasn’t as bad as we thought it would be.

We were blasted with a slightly more humid heat upon exiting the plane in Bangkok but definitely manageable. It feels like there is a constant film of moisture on your skin but without causing you to profusely sweat. Liam really struggles with the heat and often gets heat rash but he still found it acceptable.

A quick sort through immigration picked Liam’s bag up and experienced the first of many encounters with Thai friendliness. A lady stopped us as we made our way to the fast train into Bangkok, at first we passed her off as a con artist after she asked us if we had a hotel and if we knew where we were going after Bangkok, but we agreed this is mainly from reading or hearing about other people’s experiences.

All she wanted to do was help, and ended up directing us to the hotel through the sky train and warning us of securities rule against drinks on the train. Just as Liam had got himself a mango smoothie!

We navigated the ticket purchase and headed off on a 30 minute journey to the centre of Bangkok for a pittance.